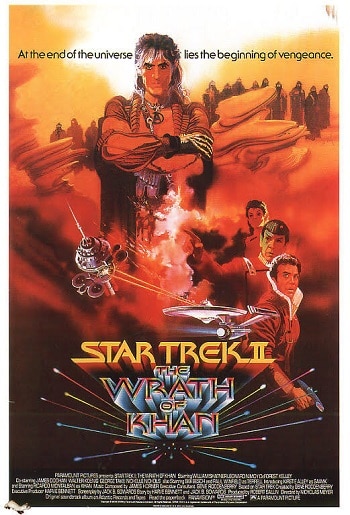 Among Meyer’s successes to that point had been the best-selling novel and screenplay adaptation The Seven-Per-Cent Solution (1976), and writing/directing the time-travel thriller Time After Time (1979).

Imagine that! He watched it to familiarise himself with the universe, the characters, and the stories they were telling. I seriously can’t imagine that the brainstrust behind the current incarnations of Star Trek – Star Trek: Discovery (2017 – please let it end) and Star Trek: Picard (2020 – please end it) – took anything but a cursory glance at the franchise pre-Star Trek (2009), and based their versions on J.J. Abrams‘s abominations.

But enough about that!

Meyer picked the twenty-second episode of The Original Series’ season one, ‘Space Seed’, as an interesting premise to revisit.

In ‘Space Seed’, Khan (Ricardo Montalban) – a genetically engineered human and tyrant from the twentieth century – tries to take control of the Enterprise. Kirk (William Shatner) eventually thwarts him, and maroons him and his people on an inhospitable planet to tame and colonise.

Meyer’s premise was simple: What happened to those people?

He watched The Motion Picture and cannibalized everything he believed worked – as little as that was. The rest he had reinvented or redesigned with such success that it became the basis for all The Original Series’ movies and the foundation for the franchise.

In Star Trek II: The Wrath of Khan (1982), the USS Reliant is looking for an uninhabited world so a science crew can test the Genesis device. They find Ceti Alpha V, only to discover Khan and his people. Khan and his people capture them, torture them, and take their ship.

Kirk is still an admiral but restless. Spock (Leonard Nimoy) tells Kirk that command of a starship is his “first, best destiny”. Kirk boards the Enterprise during a training mission, but is forced to take command when he learns the Reliant (still thought to be under Starfleet command) is going to take the Genesis device.

In a nifty video Kirk screens for Spock and Bones (DeForest Kelley), Genesis project leader Carol Marcus (Bibi Besch) narrates a presentation where we learn that Genesis can terraform an inhospitable world or, if used on a hospitable world, destroy all life. In an aside, it’s hinted that Kirk and Carol have a romantic history.

Commanding the Reliant Khan upstages Kirk and heavily damages the Enterprise. Kirk cleverly engineers an escape, and beams down to the station Regula I and meets Carol and David Marcus (Merritt Butrick) – the latter is Carol and Kirk’s son.

Khan dupes Kirk and steals Genesis. Kirk and company beam back to the Enteprise and lure the Reliant into a nebula, where their shields are rendered useless and the playing field against the heavily damaged Enterprise will be even.

Genesis explodes and gives birth to a new sun and world.

Kirk and Spock have a poignant final exchange.

Arguably, Meyer does a better job of capturing The Original Series’ universe than creator Gene Roddenberry did in The Motion Picture. But, as I wrote last week, The Motion Picture feels more like what Roddenberry had wanted Star Trek to be – and which he incarnated through Star Trek: The Next Generation (1987 – 1994) – rather than what it had become through The Original Series.

Meyer also offers a better portrayal of Kirk. In The Motion Picture, Kirk has been promoted to admiral, but finagles command of the Enterprise for the mission. That’s his entire arc, and it’s completed quickly.

In The Wrath of Khan, we meet an older Kirk. He’s struggling finding a place in the universe. He meets his son, David, for the first time, and is afraid to confront the choices he’s made.

He’s also forced to look at his own temerity. Kirk has always found ways to cheat death. The story opens cleverly with the Kobayashi Maru – a training scenario which can’t be beaten, and is a test of character. But Kirk did beat it – by hacking into it and reprogramming it. It epitomises who Kirk is – he’s always finding ways to win.

But in The Wrath of Khan, Kirk faces a real Kobayashi Maru situation, and it’s Spock’s sacrifice that allows the Enterprise to escape. This genuinely teaches Kirk – for the first time – about consequences, but also reinvigorates him to value life and find truth in his purpose.

Star Trek Into Darkness (2013) apes this in the dumbest ways possible:

Even Meyer has been critical of STID’s interpretation.

Originally, Montalban played Khan as raving and crazy. Meyer pulled him aside and said Khan didn’t have to be over-the-top – he was a leader. When he spoke, everybody listened.

From this point, Montalban played Khan as quietly intense and menacing, with hints of being unhinged.

It’s a compelling portrayal that creates the most iconic Star Trek villain in the franchise.

His interplay with Kirk sparkles throughout – from their first meeting over viewscreens, to their communicator discussion when Khan steals the Genesis device. Not once do they meet in person, yet they generate tension whenever they talk. Khan builds his villainy. Kirk shows his desperation.

Special mention to William Shatner, too. Kirk experiences a wide range of emotions throughout – from his typical cocky aplomb to enraged to grieving.

Anybody who buys into comedians who lampoon Shatner’s delivery as an indictment on Shatner’s acting just have to watch him in The Wrath of Khan to see brilliant acting.

In Star Wars, I don’t mind frenetic ship-to-ship battles. That’s a universe where ships range from tiny to huge. Fighters can apparently wreak havoc on bigger ships. So battles can be fast and dense and erratic.

In Star Trek, there is meant to be a science behind the way things operate. If a ship gets hit, it takes a certain amount of damage. The damage can impact how the ship operates. This is something the newer incarnations of Star Trek have failed to understand as they adopt and implement the Star Wars aesthetic.

The battles between the Enterprise and the Reliant are gorgeous. Ships circle one another like wary heavyweight prize fighters sizing one another up. Each blow wreaks damage. We get reports on systems being knocked out, which then has an impact on how the ships can function in the story. We see casualties. Kirk has to adjust his tactics around what the Enterprise can offer him. He also has to adjust his tactics to exploit Khan’s inexperience as a starship commander.

And the sweet visuals are breathtaking. While CGI can render any image and any background and offers the illusion of dimensionality, it still looks like a painting. A painting can give us all those things, but it’s still flat.

The Wrath of Khan was made when models were still being used, and they offer an authenticity that CGI can only mimic.

To this day, the ship-to-ship battles in TWoK are still the best I’ve seen in any movie – better than the J.J.Abrams-reincarnated monstrosities, the Star Wars Sequel Trilogy, and even the Marvel cinematic universe.

Some of the minor effects are dated, such as the push-button consoles.

The bridge of the Enterprise is a product of what its era projected the future might look like, but not as jarringly as a decade earlier where science-fiction equipment simply incorporated lots of flashing lights.

But everything else stands up, and more than compensates: awesome story, fantastic performances, and a rollicking adventure.

It remains unparalleled in the franchise.

A Look Back: Star Trek - The Motion Picture

A Look Back: Star Trek III – The Search for Spock