The Karate Kid (1984) is one of my favourite movies – a true sporting underdog story replete with surprises, good villains, and an exciting conclusion. Given its success, a sequel was inevitable. 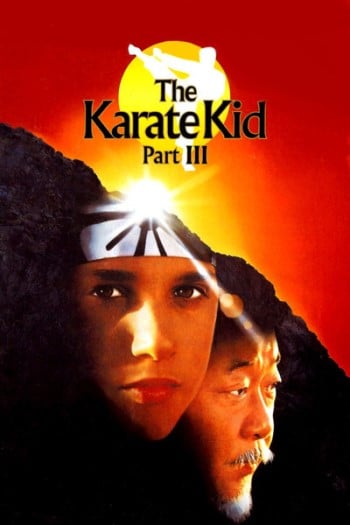 Cue The Karate Kid Part II (1986), which does well to build on the characters we grew to love – Daniel (Ralph Macchio) and Mr Miyagi (Pat Morita) – as well as increase the stakes, with Daniel now fighting for his life. An interesting bit of trivia: in the four Karate Kid movies, it’s Chozen (Yuji Okumoto) – Daniel’s adversary in The Karate Kid II – who’s the only villain to land on a blow on Miyagi.

Given the success of Karate Kid II, another sequel was a given. However, creator and screenwriter Robert Mark Kamen felt there was nothing new to say in this world, and pitched a prequel involving Miyagi’s ancestors. The studio didn’t want it. Kamen was resistant. The studio told him there would be a sequel. Did Kamen want to write it, or should they give his characters to somebody else? Kamen gave in.

Hence The Karate Kid Part III (1989), which was also compromised throughout filming. Martin Kove (who plays the antagonist Kreese) had scheduling conflicts, so they wrote in Terry Silver (Thomas Ian Griffith) as an old war buddy who picked up Kreese’s grievance against Mr Miyagi. Actress Robyn Lively – who played the quasi love interest Jessica – was only 16, while Macchio was 27 (playing an 18-year-old), so romantic scenes were out.

The Karate Kid III is an extremely mediocre movie, carried out of the realm of horrible by its legacy, Morita, and Griffith (although I appreciate others feel his performance is bombastic).

But I’ve always believed it has the ingredients for a great story: a new mentor corrupts the hero so he adopts the ideology of his former enemy, the Cobra Kai, only to question his decisions, rediscover his value, and fight for his integrity. It’s no different to any Star Wars plot where a protagonist is tempted by the Dark Side. In fact, it explores that route to the Dark Side better than the Prequel or Sequel Trilogy.

With some revision, I think this movie could’ve been great.

These are the things that I would’ve looked at …

Nobody knew the original movie would spawn a sequel, so the story follows the fairy tale where the hero wins the love interest – in this case Ali (Elisabeth Shue). We infer from the unspoken “and they lived happily ever after” that they’d stay together forever.

But in the second movie, we learn Ali has left Daniel for some football player, which really cheapens her character and the first movie’s relationship. (Shue is meant to appear in season three of Cobra Kai; I imagine she’ll explain she found Daniel to be toxic in relation to his karate machismo, and that’s why she dumped him.) Anyway, when Daniel and Mr Miyagi reach Okinawa, the story introduces a new love interest: Kumiko (Tamlyn Tomita).

Now these stories aren’t about Daniel’s love life. Each new romance depreciates the one that precedes it. We accept that James Bond has meaningless flings, because that’s who he is. But Daniel Laruso is meant to be your everyday guy. His story is about the conflicts in his life, rather than his girlfriend. When he finds love, she’s treated like his soul-mate. But you can only sell that message so often.

In the third movie, it’s explained Kumiko has won a dance scholarship – that’s a better send-off than they gave Ali. But then they introduce Jessica, who plays the platonic friend. The character feels neither here nor there, and disappears two/thirds into the movie.

I actually like that she’s not a new love interest, but given her randomness she doesn’t have enough credentials to be the confidante or companion. She’s just somebody who’s there because the story feels Daniel should play off a supporting female lead.

There could’ve been real gravitas if they were able to bring back either Shue or Tomita, and show Daniel’s maturity in a developing a serious relationship, while trying to balance everything else in his life.

And I mean a lot.

After two movies and two big fights – the last one for his life – surely Daniel should have a better perspective on life and be more balanced and mature. I understand they have to maintain his mentor-student relationship with Mr Miyagi so he’s constantly deferring, but Daniel becomes whiny and annoying about every single thing that happens.

Daniel appeals to us in the first movie because he’s just an ordinary kid who gets bullied. He has outbursts – like when he’s run off his bike, and cries to his mother that he wants to go home. That all makes sense. We see Daniel during his highs and lows. We want him to find his way.

Here, every low seems world-ending, and he becomes unlikeable with all his complaints.

Typically, because it’s a sequel, he’s bigger and badder than his predecessors, but ultimately one-dimensional.

Both Johnny and Chozen have layers – Johnny has this unfailing belief in Kreese’s system, and is also trying to win back Ali. He grows doubtful about Kreese’s tactics, and at the end swallows his pride to take the karate trophy and present it to Daniel himself. It’s a cool moment. Johnny changes. We respect him at the end.

Chozen is a mindless automaton trying to curry favour, and who loses honour in front of everybody. He tries to redeem himself in a battle to the death. It’s arbitrary, but one of the themes of the second movie is honour, which becomes a primary motivator for how the characters behave.

Barnes is bad because he’s a prick. That’s it.

In The Karate Kid II, Daniel engages in a fight to the death with Chozen. The stakes don’t get much higher than that.

Now that might’ve shattered Daniel’s courage and made him frightened of the world and conflict, but that’s not the path the story takes. He comes home chirpy, ready to blunder obliviously into the next phase of his life.

When Daniel fights Mike at the tournament, Mike’s dominance frightens Daniel. But it’s just a tournament. There are rules. The winner is decided on a points system. Why would somebody who’d fought for their life be frightened when all they’re fighting for now is points?

Daniel could’ve grown frustrated at Mike’s dominance, but not scared. It seems an unbelievable response.

Every movie has had that one special move: in the first, it was the Crane Kick; in the second, it was the punches to the rhythm of the drum; and in the third … it’s kata – that shadow dancing Daniel does to warm up, as well as find balance within his mind.

I like this because it’s not about a physical ability but a psychological one.

Mike beats up Daniel in the tournament, it goes to sudden death, Daniel does some whining, Mr Miyagi gives him a speech about not giving in to his fear, and Daniel realizes he has to find balance. He performs kata. This is also a callback to earlier in the movie when Daniel tells Silver about kata as an exercise, and Silver dismisses it.

Now Mike pulls back, puzzled as to what Daniel’s doing. Silver and Kreese urge Mike to fight. Mike goes in. Unafraid, Daniel evades Mike’s assault, lands a blow, and wins the tournament.

Fear is what held Daniel back in this fight. Once he overcame that, he always had the tools to beat Mike.

Unfortunately, fear doesn’t work as an arc here because we never knew it was going to be an issue. It’s introduced late, and resolved immediately. It might’ve worked better had they gone the post-traumatic stress disorder route, with Daniel spending the movie struggling with conflict due to his experiences with Chozen. Overcoming his fear in the bout would then give Daniel a grand arc and provide a logical resolution.

Also, it would’ve been worth emphasizing that Daniel could always beat Mike. We don’t get that. Did Mike lose because he got too cocky? Because Daniel’s kata confused him? Given the beating Mike handed out throughout the bout, Daniel winning with a single blow in sudden death could be construed simply as lucky. Daniel needed to give as good as he got – which he did in the other two movies.

After Daniel lands his sudden death blow, Mike should’ve continued attacking for thirty seconds. Daniel should’ve countered him effortlessly, showing he had found his balance. It would’ve even been worth having Daniel strike Mike and put him down, then turn to face Kreese and Silver, unafraid – whereas Daniel has always relied on Miyagi in facing Kreese, it shows now that Daniel has evolved and he can take care of himself, instead of relying on Mr Miyagi to always fight this particular battle.

Anyway, they’re just some random thoughts about a movie I know isn’t good, but feel it could’ve been great.