Welcome to my new blog, One Terrific Lie, which will follow my progress on my new novel. Each instalment will also contain one outrageous lie that I’ll (try to) disguise as the truth. Every new week, I’ll reveal the previous week’s lie. Why would you do this? you might be thinking. That’s a good question. One day, I may have a good answer (← this is not the lie).

So, anyway, I’m about to begin a new manuscript. 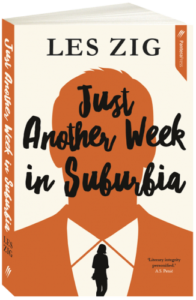 My first novel, Just Another Week in Suburbia, came out in September 2017 with Pantera Press, and was described by Ryan O’Neill, winner of the 2017 Prime Minister’s Literary Award for Fiction with Their Brilliant Careers (Black Inc. 2017) as ‘a hugely enjoyable novel which illuminates the extraordinary in the everyday, and the quirky in the quotidian.’ My second novel for Pantera, [TITLE TO BE CONFIRMED], has just been returned to me for proofing. [TITLE TO BE CONFIRMED] (← this is not an attempted pun – the title hasn’t been finalised) will come out around September 2018. And the new novel, the one I’m about to begin …?

I originally had the idea about mid-2017, but it struggled to find purchase in my imagination. A good idea grows. As it grows, possibilities develop. New possibilities stimulate further growth. Further growth creates further possibilities. And on it goes, creating this symmetric and beautiful network, like a spider’s web that – at some point – captures me. That’s when I think I know enough about the premise to start the book.

This just wasn’t happening for me, though – well, not meaningfully. There were a few spurts that got me hopeful, but they never sparked other ideas. Then, in desperation, I wondered how the story would work if I swapped the gender of the protagonist. I asked a few writers friends, who all agreed it would be a fresher story if I made the swap. Once that decision was made, things began to fall into place. What (also) helped was that the protagonist is carrying some established history into the story (but I’ll get into that next week – well, hopefully).

Ideas now flowed. I jotted a lot of them down in my phone while on a cruise around New Zealand. I never map out the whole story out before I begin. Much of it reveals itself to me in the writing – although, as I write, I will dot-point things that will or might need to occur. Equally, when I finish writing for the day and I’m doing something else – making dinner, washing up, lying in bed, etc. – ideas for revision occur to me. They’ll be the first thing I attend when I sit down to write the next day, as it helps me get straight back into it. But now I was finding lots of things were falling into place without having written one word.

My usual course – instead of outlining the story – is to map out every character (with a small backstory) and every location I think I might use in the story. This gives me a map of my world, so wherever my characters go, I know what’s there, and who’s there. This way, I don’t have to stop and contemplate these things when they come up. Also, their existence can stimulate the story. E.g. in JAWiS [MINOR SPOILER ALERT], I knew Casper had a troublesome neighbour in Vic Booth, but I didn’t anticipate how influential Vic would become.

Of course, there’s always lots of characters and locations I never use. In my [TITLE TO BE CONFIRMED] (due out around September this year – or did I already mention that?), about three/fifths of the characters I created were never used, but that was okay because they helped make that world real to me. I’m not a big believer in writer’s block. I do think it happens in extreme cases, but also believe that a writer’s lack of preparation can contribute to not knowing where to go next, which writers then mistake for writer’s block. This is my preparation – a technique taught to me by my writing mentor and one-time paramour Helen Garner.

The thing I find time-consuming – and sometimes difficult – is naming everybody. Names can’t just be random. There has to be some purpose to them. A name will immediately evoke a preconception. I say ‘Barney Hooper’, and you’ve already conjured an image of what Barney looks, although I’ve told you nothing about him.

In JAWiS, the protagonist is meant to have a name that symbolises how unobtrusive he is. His surname is ‘Gray’ – not a colour, neither black nor white, but something bland. His first name ‘Casper’ is an allusion to Casper the Friendly Ghost, because Casper is meant to be a ghost in his own existence, just slipping through innocuously. People mightn’t interpret this stuff consciously, but on a subconscious level there’s always some understanding. (You might wonder how I know this – it’s because I’ve sensed it.)

My approach to coming up with names is methodical. I’ll write out two alphabets – a lowercase a – z, and an uppercase A – Z. Then I’ll pore through two books of baby names I own, as well as a folder I’ve compiled which lists first and second names by nationality. For each first name I come up with, I cross out the corresponding letter that name begins with in the lowercase alphabet. Then I do the same for surnames with the uppercase alphabet. This means (that for primary characters) I won’t double- or triple-up on names beginning with the same letter, e.g. Bob, Bill, Burt – this can be confusing for the reader to follow (unless that’s the author’s intention). When I have lists of names, I start matching, feeling which is right for which character. If I’m looking for a specific connection, I might even fall back on what a particular name means. Then I compare the final names for any unwitting clashes, e.g. in the planning for JAWiS, I had a ‘Jane’ (in case you haven’t read JAWiS that’s the protagonist’s wife – quick! Go read JAWiS) and a ‘Dane’. Dane went.

For this new novel, I’ve got my lists, but not the names of my characters, although I do know who they are – how they factor in the story, and how they relate to one another. I had hoped to get started this week, but a severe bout of food poisoning on Saturday wiped out a couple of days. I’m hoping to nut out the characters over the rest of this week, then begin Sunday.

I won’t give away the title at this early stage, but I will give you its acronym – ‘TFSoLY’. And I will say that its protagonist is a supporting character in JAWiS (which, if you haven’t read, you should). But I’ll leave it at that.

Just Another Week in Suburbia