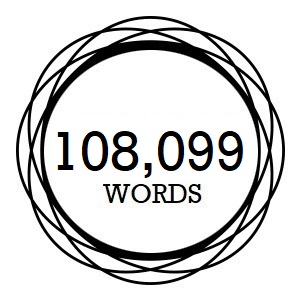 Well, very little of it today, other than to say that my WIP is nearing completion. However, it’s a mess – definitely the messiest thing I’ve written. It’s going to need revision, patching, and rewriting. Also, I’m writing a whole new opening, although that won’t happen until I finish the existing draft and go over it several times – I need to know what I’m dealing with, and I need to know it well.

With that preamble out of the way, here is the rest of that deleted scene from Just Another Week in Suburbia …

Chapter 53
(continued from last week)
○
The immediate aftermath is a blur. There are people everywhere as we filter outside – mostly onlookers wanting to gawk. Then paramedics arrive. Then reporters. Then police. Uniformed officers escort Roger to a police car. He glowers at me without the glower. He’s just a husk.
Paramedics treat Jane and me. Her cut isn’t bad. It’s cleaned and bandaged. I just have a lump on my head. A paramedic asks me a series of questions to check if I’m concussed. When he’s satisfied with my answers, he moves on. There are others who need him more – others who have breaks or lacerations. Reporters filter amongst the witnesses, but ultimately congregate upon Jean Jacket. He becomes a media darling.
Police take statements. There’s not much Jane and I can say. Beth becomes involved in a long conversation with them, telling them that Roger thinks she’s having an affair with me because she left him. Jane and I, sitting on the hood of my Fiesta, listen while we stare at the gaping hole in Sofia’s. The Porsche sits in it like an unexploded missile. The things people do.
‘I want to come home,’ Jane says.
I fold my arms across my chest. Don’t look at her. But I can imagine her eyes brimming. Tears streaming down her cheeks.
‘I don’t expect you just to forgive me. We don’t even have to sleep in the same bed. But I’ll prove myself to you.’
‘I don’t know if I can ever trust you again.’
‘Give it a chance.’
She reaches for my hand. I pull it out of reach.
‘Please?’
My eyes flit to her belly. Rise up her body. To her face. Sure enough, she is teary. So many times over the years, this is when I would’ve reached out to pull her into my arms. The instinct is there to do it. But I don’t want to. She can cry. She deserves to cry.
‘You can come home,’ I say, ‘but I don’t know where it’s going to go.’
She wants to rush me, throw her arms around my neck. My hands hover about my hips, like I’m preparing to fend her off. She nods.
‘Okay.’
‘But if you think this is just going to be some smooth transition, you’re kidding yourself.’
‘I know.’
‘It might never work.’
‘I understand.’
‘Fine, then.’
○
I see Jane to her Bug and she drives off. Then I double-back to catch up with Beth just as the police have dismissed her.
‘Roger followed me to your place last night,’ she says.
‘Oh.’
‘Yep. Did you see him this morning?’
‘At my place?’
‘Apparently he was parked down the street. He slept in his car.’
I shake my head. ‘I guess it explains why he went a little crazy.’
‘Yeah. A little.’ Beth smirks. ‘The things we do, huh?’
I shrug.
‘You taking her back?’ she asks.
‘Not yet. She’s coming back home, but …’ I shake my head.
‘Maybe she deserves a second chance.’
‘You didn’t give Roger a second chance.’
‘I think that’s all I did over the years. Everybody’s different, though.’
‘Thanks for everything.’
‘If you need me …’ She forms her thumb and pinkie finger into a gesture meant to be a phone and brings it to her ear.
‘Same.’
Beth smiles, gives me a little hug, and a kiss on the cheek.
Previous