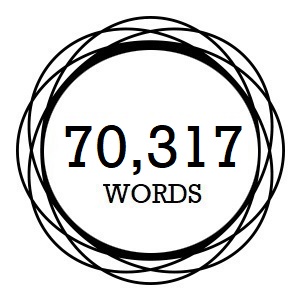 Year ago, I went back to school as a mature-age student to study writing and editing. Part of the course requirements, I found out, were classroom presentations and (at least) two public readings at an event the course hosted monthly. Both prospects horrified me. The course, however, understood that if you’re going to be a writer, you will at some point need to conduct yourself publicly, e.g. at a launch, or readings.

Come the night I had to read, I appeared calm – years of dealing with anxiety had taught me to hide what was going on inside, but I was terrified I would mess up, and grew short of breath (a common anxiety symptom for me). I kept psyching myself up, though. I kept telling myself I would be ‘fantastic’. Not ‘good’ or ‘okay’ or that everything would be ‘fine’. I had to aim high. If I missed, I would land thereabouts in the vicinity of ‘fantastic’. If I aimed moderately (e.g. okay) and missed, I would land in the region of ‘below average’ (ewww) or ‘terrible’.

In the end, I was good. Not brilliant or anything, but good, and that was enough for me. Best of all, nobody knew how nervous I had been.

Come the day of the class presentations, we (students) gathered in the hallway, waiting to be let into the auditorium. Another mature-age student sat on the floor, back against the wall, on the verge of the panic attack. I knelt by her and told her she would be fine. She responded, ‘Not everybody is as confident as you, Les.’

Ha. She had no idea what was going on inside my head.

Over the last thirty years (and more), I’ve dealt (on and off) with conditions such as anxiety, depression, and OCD. For about a five-year period I was agoraphobic, and struggled to get out of my safety zone. Even now if I go somewhere new, it rears up. So going into a course and fraternising with strangers, and then being required to present myself publicly was always going to be difficult, regardless how I conducted myself externally.

When I came out of the course, I’d developed a newfound confidence, and because of my background with neuroses pursued speaking opportunities first with SANE, and then with beyondblue. With everything I’d gone through, I figured I had something to offer others through lived experience.

I did a number of talks, always nervous early but eventually falling into a rhythm. My most difficult engagement was at Broadmeadows Police Station, where I talked in general about anxiety and depression in front of a group of detectives and uniformed officers. When I walked away from that, I told myself if I could do that talk, I could do anything.

Something I’ve learned – not only through my own journey in public speaking, but also in dealing with anxiety – is that it’s the pressure we put on ourselves that undoes us.

As far as public speaking/readings go, it’s that fear that we’re going to mess up, that people will think poorly of us, that we’ll be so embarrassed we’ll never be able to show our faces again.

My attitude to those fears – and others of their ilk – has become simply this: Who cares?

If we mess up, so what? For many, the first stumble lights the fuse to detonation. If I mess up now, I’ve learned to stop, reset, and continue as normal. If people think poorly of us, that’s more an indictment of them – that they’re laughing at somebody’s misfortune – than us. And if neither of those things matter (or anything along those lines), we shouldn’t be embarrassed. And even if we are, again, so what? There’s worse things in the world – illness, violence, poverty, etc.

In reality, reading in public is no different to reading aloud to ourselves. It’s not an audience who applies pressure. It’s ourselves, by introducing the belief that an audience is judging us. Once that pressure is removed – once we think, Who cares? – so is the self-judgement. And once that goes, public speaking/reading becomes simpler.

If you are somebody who grows nervous, think about it that way the next time an opportunity presents itself. 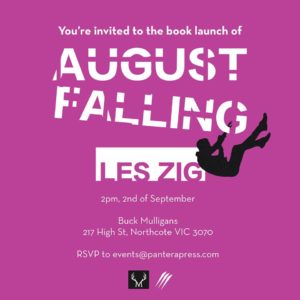 The date for the launch of August Falling has been set: Sunday, 2nd September, 2.00pm, at Buck Mulligan’s in Northcote. If you’re free I’d love for you to come along.

And if you’re not, I’d still love for you to come along.

(But being that it’s also Father’s Day that day, I’ll understand if you can’t.)