There are similarities. Lots of similarities. Look at the basic premise: an unsuspecting nobody becomes ensnared in a galactic struggle and learns they have the biggest part to play.

Which movie is that? Both, of course.

Because of that, I’m going to compare the two as if The Force Awakens is a remake of A New Hope, given both stories incorporate the same key beats.

Beat #1
The protagonist’s life is disrupted when they come in possession of a droid.

People believe A New Hope is driven by coincidence – it’s not.

Leia (Carrie Fisher) leads a mission to find Obi Wan Kenobi (Alec Guiness) on Tattooine. When her ship is captured, she programs the Death Star plans into R2D2 (Kenny Baker) and sends him on a mission to find Obi Wan. R2 jettisons the escape pod, and when he lands on Tattooine – and despite the protests of C3P0 (Anthony Daniels) – keeps trying to get to Obi Wan. R2 does this the moment they land, and then does so again, even after becoming the property of Uncle Owen (Phil Owen), so R2 obviously has Obi Wan’s location.

Obi Wan is on Tattooine to watch over Luke (Mark Hamill), so Obi Wan must live in close proximity. Jawas capture R2, and then go to Uncle Owen’s farm to sell droids. This is a small stretch but, again, this is all happening within the vicinity of wherever Obi Wan lives, and we see that Tattooine’s population isn’t dense, so it’s not unlikely to think that farms would be few, and that in this area the Jawas would end up at Uncle Owen’s. The biggest coincidence is that Uncle Owen buys C3P0 and R2, although they both fill needs on his farm.

Rey (Daisy Ridley) is a scavenger on Jakkuu. While Poe Dameron (Oscar Isaac) is on a mission and programs a map into BB8, BB8 then rolls across the desert and bumps into the one person who has no connection to anybody or anything, and is also Force-capable – Rey. Rey then bumps into Finn (John Boyega) – the person who helps Poe escape from the First Order, and who earlier set BB8 loose across the desert. Rey has no connection or proximity to either. It’s just all coincidences.

Beat #2
The protagonist is forced to leave the planet they live on.

When Han Solo (Harrison Ford) agrees to charter them to Alderaan, Luke scoffs at the sight of the Millennium Falcon. When they’re fleeing Tattooine and a dashboard indicator lights up and beeps, Luke asks, ‘What’s that?’ When he bemoans them not leaping to hyperspace quick enough, Han Solo reproaches him and says they need to make precise calculations.

What we learn throughout all this is Luke really has no idea what he’s gotten himself into, or how to handle to it all. He’s ill-equipped, and enthusiasm isn’t going to get him anywhere. This adds to the excitement and tension. How will he cope with what’s out there?

Rey’s driving memory is being abandoned by her parents, and wanting to find out who they are. This, however, in no way motivates her actions. Whereas Luke yearns to make a difference, Rey actually believes the events of the Original Trilogy are legend.

When she is accosted by two ruffians who want BB8, she easily incapacitates them with her quarterstaff. Well, okay. She can handle herself because she’s grown up alone in this tough environment. After meeting Finn and being pursued by Stormtroopers and TIE Fighters, Rey jumps on the Millennium Falcon (which just happens to be there), and flies this ship expertly. This is a ship that presumably she’s never flown – presumably she’s never flown any ship. When there’s issues with the ship, she repairs it. Now while she might be a scavenger and know her way around some tech, surely fixing a ship should be totally beyond her expertise. It’s not like I can go to the airport and repair a 747 just because I know how to fix a toaster.

To top it off, while flying through space they bump into Han Solo and Chewbacca (Peter Mayhew).

Beat #3
The protagonist learns about the Force.

While the Millennium Falcon is hurtling through hyperspace, Obi Wan introduces Luke to the concept of the Force. A seeker droid hovers above Luke’s head and fires small energy bolts at him. Luke tries – but fails – to fend them off with a lightsabre. Han laughs and scoffs about the Force. Obi Wan asks Luke to try the exercise again, but this time wearing a helmet with a dark visor. Luke feels the Force and fends off the bolts. Obi Wan tells him, ‘You have taken your first steps into a larger world.’ It shows that regardless of what potential Luke holds, he is still a novice. But he’s now aware of something much greater than everything he’s known up to this point.

On Takodana, Luke’s old lightsabre calls to Rey. This is her awakening to her Force potential. It’s not really something she embraces, or has to achieve. They give it to her (without any struggle or accomplishment). The possibility scares her and she flees. Kylo Ren (Adam Driver) accosts her and incapacitates her with some sort of Force-stun. It’s Rey’s only defeat in the story, but doesn’t exist to give her character a failure to learn from – as occurs repeatedly with Luke – but just to move her into the next part of the story.

On Kylo’s ship, she Force-rebukes Kylo’s attempts to probe her mind, then influences the mind of a Stormtrooper (Daniel Craig) to release her. How? She didn’t know the Force existed until a couple of scenes earlier, and yet she is already capable of two abilities – and one of those is against Kylo, who’s been trained for years both as a Jedi apprentice and as a Sith. Unlike her first encounter with the ruffians she incapacitated, there is no explanation, and no extrapolation, that you can apply to suggest why she can execute these powers with no training at all.

Beat #4
The protagonist witnesses the death of their mentor. 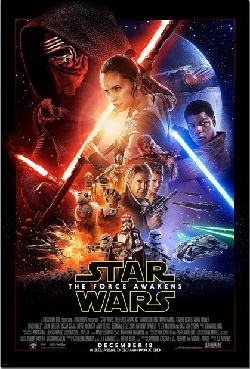 While on the Death Star and trying to get back to the Millennium Falcon, Luke sees Obi Wan and Darth Vader (David Prowse/James Earl Jones) in a battle with lightsabres. Luke stops to watch.

It’s speculation why Obi Wan chooses to sacrifice himself, although it’s implied he knows he’s no longer a match for Vader, and you could be forgiven for thinking that he’s continuing existence would jeopardise the lives of the others (who might try to rescue him). Obi Wan’s battle creates a distraction, gives Luke and the others a clear run to the Millennium Falcon, and Obi Wan’s death empowers him to become a spiritual advisor for Luke. Also, if you looked at it as a prize fight, from a marketing standpoint it continues to build Vader’s stature, and introduces him to Luke as the villain who must inevitably be defeated. The stakes have just been increased.

The Force Awakens treats Han Solo’s death almost purely as a marketing ploy. Snoke (Andy Serkis) tasks Kylo with killing his father as a rite of passage. It’s meant to build Kylo up – both in the story, and in the eyes of the audience. Let’s hate him! He killed a beloved character! Unfortunately, it’s meaningless. Rey defeats Kylo almost immediately afterward, so all stature gained from that scene is squandered. In The Last Jedi (2017), he remains the same immature brat, so it was no rite of passage either. And Han’s death doesn’t affect Rey’s life at all. Han’s wiped from existence, and everything goes on the same.

Arguably, The Force Awakens would’ve been better positioning Leia as a Jedi (given her abilities which, apparently, she hasn’t used at all between The Return of the Jedi (1983) and The Force Awakens), and Snoke tasking Kylo with eliminating every Jedi threat. Now Kylo’s killed his mother (the same rite of passage assigned to murdering his father); he’s eliminated the last known Jedi (if Luke’s in hiding), which is a significant blow; and the Resistance lose their long-time leader, throwing them into disarray. That organically creates interesting possibilities for where the story could go (or could’ve went). And then you could still do wonderful things with Han, like him going to get Luke, and then (with Rey) trying to hunt down Kylo and Snoke.

Of course, maybe the whole argument here is that none of it means anything, and these people are trapped in the same endless cycle of Good versus Bad, regardless who the players are, and how many lives are lost.

But if that’s the case, then this whole universe becomes redundant because if there’s no ultimate objective, who cares?

The rebels assault the Death Star and lose ship after ship. Luke commences a trench run. Obi Wan’s disembodied voice tells Luke to trust the Force. Luke turns off his targeting computer and hones in on letting the Force flow through him. Darth Vader, pursuing in his own ship, senses the Force is strong with Luke. But that gives Luke only the smallest leeway. Vader finally targets him and shoots. A returning Millennium Falcon saves Luke, and the mission.

Rey encounters an injured Kylo Ren and they duel with lightsabres. Some people counter that her expertise is an extension of her quarterstaff ability. But these are two different weapons. She’s never used a lightsaber up to this point. It would be like saying I can be excellent with a baseball bat because I know how to swing a tennis racquet. Rey seizes the lightsaber with the Force (another ability she has spontaneously developed), then attacks Kylo and defeats him.

Despite Luke’s best efforts, he is vulnerable. Despite his Force-potential, he really can only grasp at the fringes of it. We understand he’s begun his journey with the Force, but he has a long, long, long way to go, whereas Rey has already exhibited Force mastery in different areas and defeated the story’s antagonist. Where is her journey? Where is her growth? What is the story’s arc?

Lots of people have made the same point, but it’s interesting when you compare her to Luke’s journey and the key points that shape them. One character goes on a real journey, struggles, grows, and ends the story different to how he begun it, while the other character – circumstances aside – does not change at all. She is just handed what she’s needed to move forward so the story can continue to unfold.

Life is about making mistakes, learning from our failures, and (hopefully) picking ourselves up so that we can improve.

That’s why we can empathise with Luke, while Rey sets an impossible standard.

The Empire Strikes Back vs The Last Jedi