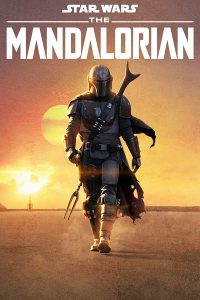 The best thing people are saying about it is, ‘It’s not offensive!’

This is important to understand. People are judging it against the curve of Disney’s Star Wars movies, the way they judged The Force Awakens (2015) against the sour taste that the Prequels had left.

But what if that curve wasn’t there?

How would it stand up?

I like the feeling of the setting. Set five years after the events of Return of the Jedi (1983) – you know, that movie where we thought the Empire was overthrown and the Emperor killed – traces of the Empire remain, although they’re dishevelled, disorganised, and operate in the shadows.

I would like to see the New Republic assert their presence, and lawfulness return to planets to show that there was a point to overthrowing the Empire and bringing in the Republic.

But it’s early and that could still come.

The Mandalorian (Pedro Pascal) is a bounty hunter who’s contracted to kill Baby Yoda. Mando – as he’s known – struggles to kill an innocent, and reneges on his contract. That’s it. His arc is actually largely finished in episode 1. He’s gone from (presumably) a merciless bounty hunter to somebody with a conscience.

While (some of) the stories continue to chip away at his emotional armour, he isn’t that interesting. We get flashbacks of his life as a child, which justifies his connection to Baby Yoda (both threatened by greater forces), but there’s not a lot more here to mine.

One thing that also frustrates me is that his skillset is inconsistently executed. One episode he’ll take care of foes with ease, the next he’ll struggle.

The Mandalorian employs the template of a western – a gun-for-hire will go somewhere, get involved with the people or be hired for a job, and then see that job through. The end. Move onto the next episode.

There’s nothing wrong with that as long as the stories interesting. But most are just so-so. They don’t advance the over-arching plot. They don’t advance Mando’s development. Most of the middle episodes just jog on the spot. These are generic stories that have been done in other series decades ago.

Some of them also play out like video games, e.g. go there, get that, bring it to this person, then get that.

The first episode and last two episodes – which tied into the arc of former imperial, The Client (Werner Herzog), wanting Baby Yoda – were interesting but limited.

Some of the episodes look great. Others look tacky. A few scenes look like people have just been sitting in front of a green screen – which is obviously what they’re doing. But you don’t want to be thinking that. You want to believe in whatever the setting is. The village background in episode 4 looks like the background in a 1950’s B&W movie.

I do wonder if they’ve been saving money for the bigger set pieces, because when it works visually, it’s gorgeous. Yes, he’s super cute. It’s like somebody in Disney said, ‘Find something to match Baby Groot!’

My one query is that he seems to be Force inherent. I’ve been made aware something like this also happened in The Clone Wars (2008 – 2020). I’m not a fan of this in principle.

In the Prequels and the Original Trilogy, the Force is sold as a potential that the bearer carries, but has to learn to tap into and master, and from there they have to develop their skill-set.

The counter is that Baby Yoda’s species might be naturally Force-inherent. That feels like a cheat given nobody else is. And even if he is Force-inherent, does that mean he comes with ready-made skills? That really undersells the journey a character has to take to better themselves. How do you relate to that? We can relate to a character’s struggle. We all struggle in life to improve our standing. We cannot relate to a character being given whatever they need to be better than they were. (Hello, Sequels.)

Also, if this is the case (for this species, and thus Yoda), Yoda loses value in The Empire Strikes Back (1980). What right does he have to lecture Luke about his efforts if he (Yoda) simply inherited all his abilities?

Obviously, this will be explored further, so I hope there’s another explanation.

I loathe that this has been introduced into the Star Wars universe – here in The Mandalorian, and also in The Rise of Skywalker (2019).

I would be fine if the Force-wielder healed themselves – to an extent. Obviously, some injuries would be too dire, e.g. Anakin Skywalker can’t heal himself, and has to function in the Vader suit.

But, now, if they can just heal anybody else, it breaks stakes in this universe. The reason we feel tension in a story is our fear that something will happen to the characters. If you can just Force-heal injured characters, then why care anymore?

Also, now that this exists, you have to wonder why it wasn’t applied in situations where it was clearly needed, e.g. why didn’t Obi Wan heal Qui Gon in The Phantom Menace (1999)?

If somebody says it’s because Obi Wan doesn’t know how, then how does Rey? This now becomes problematic.

This is the problem with magic in stories. Once you become too free with it, then audiences start quizzing why it isn’t providing solutions when it clearly could.

If you look at something like The Lord of the Rings, Gandalf does very little with his magic, so we never ask why he doesn’t use it in dangerous situations. We have very little frame of reference for what power and abilities he does have, so we can’t rely on them as a panacea.

The same occurs with the Force in the Prequel Trilogy and the Original Trilogy – it’s tightly contained. Even the Jedi mind trick is qualified as only working on the weak minded. They prove that in Return of the Jedi. Luke uses the Jedi mind trick successfully on Jabba’s aide, Bib Fortuna, but unsuccessfully on Jabba. It also occurred in The Phantom Menace when Qui Gon failed to influence a droid. It shows this isn’t a quickfix.

But now the Force is being opened up with new and extremely powerful and unqualified abilities (e.g. Force heal, Force teleport). That is going to present narrative queries where (and when) previously they didn’t exist.

The story now centres around Baby Yoda. Who is he? Why did the Imperials want him? What will become of him?

If I had to speculate, I think Baby Yoda will be a clone of the original Yoda (there’ll be some justification for finding a sample, e.g. the blanket he slept under on Dagobah had hair on it). The ready-made abilities will be a result of some sort of muscle memory that translated across in the cloning.

The former Imperials will be after him because they’re trying to find a way to weaponise the Force, as they’ll see that as a means to getting back into power.

I guess an argument can be made that Disney played it safe given the backlash the Sequels were receiving. I always believe that if you put something good out, that’s both your best offense and defense, whereas making something ‘safe’ is purely a defensive move. Right now, The Mandalorian is playing like The Blandoralian.

But it has at least put all the pieces in place to set up a story. In that regard, it plays like a prequel to the true story, where they’ll be able to move into gear. And – unlike the worrisome Star Trek franchise – it has good people behind it in Jon Favreau and Dave Filoni who seem to have an understanding of this universe.

It’ll be interesting where they take season two.