One of my favourite guilty (movie) pleasures is Highlander (1986). 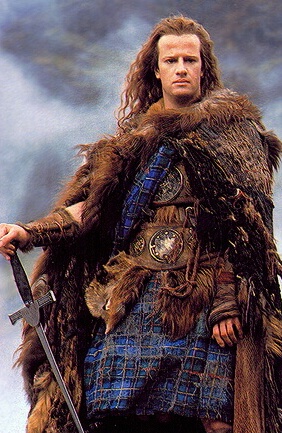 In 1518, Connor MacLeod (Christopher Lambert) is born in the clan MacLeod in a small village in Scotland. During a battle with a rival clan, the Frasers, in 1536, the Black Knight, Kurgan (an amazing Clancy Brown), stabs Connor through the belly. Kurgan declares, ‘There can be only one!’ and is about to decapitate Connor when his clansmen save him. But it’s all for nothing. Connor’s wounds are fatal. He dies that night.

The next day, he’s up and about and as healthy as ever. Fearing he is possessed, his clan drives him from the village. We rejoin him some time later. He’s living in a castle with a partner, Heather (Beatie Edney). But their lives are interrupted when they are visited by Juan Sánchez Villa-Lobos Ramírez (a scene-stealing Sean Connery).

Ramirez explains that Connor – like Ramirez himself – is an immortal. The immortals hunt one another in pursuit of the Prize – an unspecified power that the last remaining immortal will receive. The only way an immortal can die is if they lose their head. When one immortal kills another, they inherit all their victim’s knowledge and experience – a phenomenon known as the Quickening. Ramirez trains Connor and warns him that Kurgan is also an immortal, and if he wins the Prize, humanity will suffer an eternity of darkness.

In present-day New York 1985, Connor is masquerading as an antique dealer, Russell Nash. He encounters another immortal, Fasil, and they battle to the death. Connor then becomes the prime suspect in Fasil’s murder. Obviously, the police don’t understand what’s going on. A forensic pathologist, Brenda Wyatt (Roxanne Hart), investigates Connor, and learns there’s something odd about his background.

The story alternates between 1985 and the past, each flashback expanding on the mythology, as well as providing character development. A lot of the storytelling touches upon the curse of immortality – that you outlive those you love. Apparently, early drafts of this script pushed this further. Kurgan wasn’t a straight-out antagonist, but a self-loathing warrior who competed for the Prize simply because it had become ingrained in him as a survival instinct, but he just wanted it all over and done with.

Highlander marked the feature directorial debut of Australian Russell Mulcahy. Mulcahy had learned his trade directing music videos, and had become one of the most sought-after (music video) directors in the 1980s. He handles the epic historical set pieces with aplomb, and the contemporary action pieces have a stylishness that makes the immortals – and their pursuit – feel distinguished from everything going on around them. The cops – baffled about the sudden state of beheadings – are a good commentary on how the everyday person would cope with extraordinary events.

The band Queen was meant to provide one song, but ended up liking the movie so much they did the whole soundtrack. Their ballad, ‘Who wants to live forever?’, is one of the most moving ballads you could hear, but seems to have been lost behind more high-profile songs associated with this movie, such as ‘It’s a kind of magic’ and ‘Princes of the universe’. (Those songs themselves are often lost behind Queen’s plethora of hits.)

The movie has a closed premise. Here are these immortals. Obviously, they’ll fight to the end. One will remain and win. Then they become mortal, and lead a normal life. The end. But because of the movie’s success, it spawned four sequels, an animated series, an animated movie, a live-action series also entitled Highlander (1992 – 1998), and a spin-off series. The live-action series was meant to follow Connor’s life, but the lead, Adrian Paul, preferred having his own character, so they created Connor’s cousin, Duncan.

The series disregards that the first movie delivered the conclusion that Connor won the Prize. Now there are lots more immortals. Duncan encounters a new one pretty much every episode. That’s the down side. But on the up side, they explore the mythology and come up with some nifty concepts. Apparently, there are a number of people who might be immortals, but the immortality needs to be triggered by a violent death. There is also a group of mortals, known as the Watchers, who keep a vigil on the immortals, because they’re interested in who’ll be the last.

But let’s backstep: Highlander came out in 1986. The television series started in 1993. In between, there was a sequel to the movie, called Highlander II: The Quickening (1991).

Yes, Connor was the last immortal. He won the Prize. In 1994, humanity become aware that the ozone layer is depleting. By 1999, Connor, using the Prize, has helped scientists coordinate to build a shield around the world that protects people from the depleted ozone. But that’s been a double-edged sword: the world is pitched into perennial twilight due to this buzzing shield operating constantly, and the weather remains fixed at a humid 37 degrees. By 2024, people have fallen into melancholy. Humanity has lost hope. Now Connor is old and embittered and resigned. He’s just waiting to die. (I imagine this was Rian Johnson’s template for his incarnation of Luke Skywalker.)

But, wait, Connor has a flashback. He wasn’t born in a small village in Scotland. He was actually a rebel on a planet, Zeist, who was part of an uprising against the government. Ramirez was his comrade. The rebellion was quelled. As punishment, the Zeist government exiled the rebels to Earth … where they would become immortal. (That’ll show them!) They would fight one another, and the last remaining immortal could return to Zeist – why you’d want to return to a planet where conditions must be so bad that you’ve just tried to overthrow the government is anybody’s guess.

A Zeist warlord, Katana (Michael Ironside) sends back two flying warriors (I don’t know why they fly) to eliminate Connor so he can’t return to Zeist. But Connor fights back and kills them. This triggers Connor’s immortality. He de-ages. Then the plot gets muddy. Well, muddier. And stupid. Well, stupider. Connor learns that the ozone has replenished, but the corporation who privatises the shield is only interested in their ongoing profit. Katana throws in his lot with the corporation to kill Connor. Ramirez, who was killed in the first movie, returns when Connor declares, ‘Ramirez, I need you!’ Ramirez’s explanation for surviving decapitation is, ‘I’m rather glad the magic works.’ (I imagine this was JJ Abrams’s template for his incarnation of Emperor Palpatine.)

This is a brief sampling. There’s more. Ninety-nine percent of this movie is so wrong. It is amazing that a story can just keep mis-stepping. Highlander is a close-ended story. There really isn’t anywhere to go. And while an exploration of how Connor used the Prize could be interesting, it’s sidelined into some B-grade plot that rehashes the original story, just with a different villain.

There were issues behind the scenes. Russell Mulcahy re-cut the movie for a special director’s cut, aka Highlander 2: The Renegade Version. Is it better? Well, yes. But that’s like debating whether it’s better to be hit by a car or to be hit by a van.

It astonishes me that anybody greenlit Highlander II: The Quickening, and that the standard was so low that people let this story go through. Did anybody watch the original? I’m also stunned that director Russell Mulcahy, lead Christopher Lambert, and supporting actor Sean Connery, all returned to make it. You hear of directors and actors declining sequels because of the quality of the script.

They should’ve stopped at the first.

There should be only one.

A Review: The Mandalorian