So JJ Abrams has headed over to Warner Bros. to reboot the DC universe with Justice League Dark. 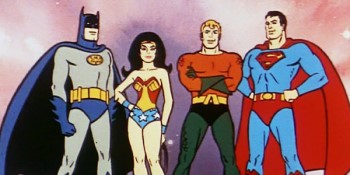 The DC universe is a mess. I blame Zack Snyder who fundamentally didn’t understand the characters, and in trying to update them for a contemporary retelling disfigured them hideously – especially Superman, who became this gloomy, insecure, brooding twat.

But now that JJ’s Justice League treatment has been leaked, we can marvel in his ingenuity – and it’s up to typical JJ standards.

Clark’s intellect is recognized in primary school as being near genius. He’s sent to the famed Metropolis School for Excellence to pursue a scholarship for one year. And of course, one of his fellow students – dealing with the grief of his parents’ murders – is young Bruce Wayne.

The two strike up a begrudging friendship, and demonstrate their polar extremes in dealing with the school bully, Lex Luthor: Clark tries to be diplomatic, while Bruce wants to beat him. A fellow student, Diana Prince, intercedes and disarms the situation.

Fast-forward to university, where all four are reunited. Clark and Bruce are now both now attracted to Diana Prince, although she is not interested in either of them. She has been sent out into the world by the Amazons to learn the ways of everyday people. Being inquisitive, she discovers Luthor is involved in something nefarious. Diana asks Clark and Bruce for help – if they can keep their rivalry in check.

They team up Harry Potter-style when Lex Luthor opens an interdimensional gateway and tries to bring in Brainiac, who is intent on the conquest of Earth.

Clark, Bruce, and Diana just manage to close the gateway, but each recognize their shortcomings, and go their separate ways to better themselves: Clark to the Artic, where he builds the Fortress of Solitude, and is educated to become Superman (and learns more about Brainiac); Bruce roams the world, learning the skills that’ll make him Batman; and Diana back to the Amazon, where she adopts the skills to make her Wonder Woman.

When they return to civilization, they each perform heroic deeds, which introduces their superhero personas to the world.

Luthor is now the governor of Metropolis. He is intrigued by the trio and investigates them. Brainiac tells him that Superman comes from Kyrpton, and he will be vulnerable to kryptonite. In a homage to Superman (1978) Luthor finds a chunk of kryptonite in a museum, and works to turns it into a ray. He begins his plan for global conquest.

He warns people of the threat to Earth posed by Brainiac. His scare-mongering is a tactic to drive his political aspirations (although I don’t know why you have political aspirations when you’re hellbent on conquering the planet). But Superman, Batman, and Wonder Woman – knowing Luthor’s prior connection to Brainiac – believe Luthor’s secretly in collusion with Brainiac and investigate to expose him. But this is all part of Luthor’s plan.

The super-trio find that Luthor has a secret underwater base in the Atlantic. Superman and Wonder Woman swim there, while Batman takes the Bat-sub. The Bat-sub is tangled in reeds and Batman falls behind. He tells the others to go on, but doesn’t confess his oxygen is almost out (although why he has only enough oxygen for a one-way trip is anybody’s guess). Just when things look bleak for Batman, Aquaman emerges from the deep and rescues him.

Meanwhile, Superman and Wonder Woman come to Luthor’s base. Superman is incapacitated with a kryptonite ray, while Wonder Woman is frozen. Lex Luthor appears as a hologram to taunt them. He doesn’t recognize Superman as Clark or Wonder Woman as Diana Prince.

Batman and Aquaman arrive at the underwater base and save Superman and Wonder Woman just in time, whisking them away before the base explodes. No explanation is given to how Batman has enough oxygen now to make the return from the deep.

Luthor opens a gateway, which allows Brainiac’s forces to invade Earth. This attracts the attention of the Green Lantern Corps, who respond by sending one Lantern to help. He’s killed, and his ring falls to Hal Jordan, who becomes the Green Lantern. He fights a rearguard action against Brainiac’s forces, but is finally overwhelmed by numbers. He is pushed back against the coast line.

A Killer Whale – with Aquaman riding on its back – leaps onto the beach and smashes Brainiac’s forces. Superman and Wonder Woman arrive to defeat the rest. Batman tracks Luthor to a secret mountain base. Together, the superheroes make their assault on the base, each at different times using their specific expertise to disarm a nasty booby trap. Finally, they arrive at Luthor’s control room.

Luthor declares he will be ruler of Earth. Superman pleads with Luthor, saying that Brainiac is just using him. Luthor believes he’s too smart to let that happen. But new interdimensional portals open up, allowing more of Brainiac’s forces through. This is a suprise to Luthor. Brainiac has gone rogue.

The superheroes fight the forces but are uncoordinated – until Wonder Woman begins to strategize. The fight turns. They fight their way through the numbers to get to Brainiac. Brainiac overcomes Superman, Wonder Woman, Aquaman, and Green Lantern, but Batman outsmarts him and banishes him to a nether-dimension.

The battle is over.

Lex Luthor claims he was possssed by Brainiac. He has spurious doctors who back up his claim. Superman knows Luthor is lying, and Luthor knows that Superman knows, but public sympathy has developed for Luthor – he did warn everybody before anybody else knew, after all. The support encourages Luthor to announce a run for the presidency. Superman says he’ll be watching and waiting.

Superman rejoins Wonder Woman, Aquaman, Batman, and the Green Lantern. They discuss making a group to be alert for evils. Superman says Diana is the one who’s displayed genuine leadership abilities and suggests she should be their leader.

Wonder Woman sends out a plea to all corners of the globe, saying if anybody has abilities to come join them, as they are forming a league to fight against the evils in the world – the Justice League.

After the credits, we see a red blur speeding down a desert highway.

How stupid does all this sound?

Well, none of it’s true. There is no leaked treatment. I just made it all up in the space of fifteen minutes, but I bet you believed JJ Abrams was fully capable of this plot.

A Look Back: The Sixth Sense