The Sixth Sense is a 1999 supernatural drama in which a troubled eight-year-old boy, Cole (a brilliant Haley Joel Osment) claims he can talk to the dead. Malcolm Crowe (Bruce Willis) is a child psychologist suffering from guilt after one of his former patients, Vincent (Donnie Wahlberg), visits him years later and shoots him, then takes his own life. In trying to help Cole, Malcolm sees possible redemption. Cole’s mother, Lynn (Toni Collette) struggles to cope with the pressures of being a single mother while things are going on around her that she doesn’t understand. 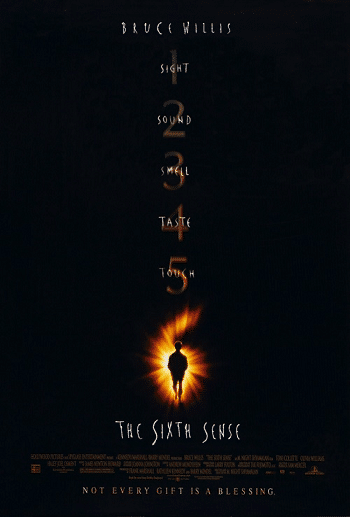 The movie catapulted writer/director M. Night Shyamalan to fame and had everybody talking about its twist. I actually didn’t see the movie until it hit VHS, so I knew there was a twist, but avoided hearing about it.

When I finally watched the movie, the twist was on my mind for about the first fifteen minutes – then the story sucked me in and I just wanted to see where it would go. I appreciate some people did pick the twist, but the majority I know didn’t.

The strength of The Sixth Sense is that it gives us characters that we care about, they each have their own objective, and we’re taken on a journey where we want to see what happens next. We want to see Malcolm redeem himself, as well as reconcile his marriage. We want to see Cole come to some peace. We want to see his clueless mother become clued-in.

Shyamalan also takes his time introducing the supernatural elements, so we’re forced to deal with them as Cole deals with them – first with fear, then with wariness, and then with acceptance. There are some brilliant touches – such as breath misting, people wrapping clothes tighter around themselves, and plummeting thermostats – that foreshadow when something supernatural’s about to happen.

But three things have always bothered me about the story. Two are nit-picks. But the other not so much so.

Cole is having breakfast when Lynn spots something on his school tie. She takes it off him, then goes into the adjoining laundry to find a clean one. (Cleverly, their pet Husky puppy has buried itself in a laundry basket, as if it’s hiding.)

When Lynn returns to the kitchen, she finds most of the cupboards and drawers opened. She assumes Cole did it, and nervously asks if he was looking for something.

Lynn’s absence (in real time) from the kitchen is fourteen seconds: that’s not a lot of time for Cole to get up from the kitchen table, and noiselessly open drawers and cupboard doors all around the kitchen, then return to his chair. The cupboard door handles are also out of his reach. He’d have to ram his fingers under the bottom corner of each door to get enough leverage to open it. That’s not going to be a quick process.

I appreciate Lynn is meant to be oblivious and that she rationalises the crazy stuff happening around her until she can rationalise no more, but given the time available and the age and size of her son, I find it hard to believe that she doesn’t question this more.

Cole is invited to a birthday party, but is tricked into entering an upstairs room where he is harangued by some sort of entity – we never know what exactly. Lynn takes him to the hospital, where the doctor suspects that Lynn has abused her son.

While I can accept this child abuse thread is never picked up again, the point of the story is that these ghosts aren’t harmful – they’re just trying to find a way to communicate. They recognise Cole has that ability, so they come to him. They’re scary, but they’re not evil.

Having a malevolent entity gives Cole a very real reason to be terrified.

Even if this entity wasn’t malevolent – even if it was just pushy and insistent – it still hurts Cole badly.

Throughout, Lynn references how a bumblebee pendant keeps ending up with Cole. Towards the end, he says that Grandma – Lynn’s mother; it’s established they had a difficult relationship – gives it to him. This is the vehicle in which Lynn learns about Cole’s abilities.

And that’s all brilliant.

Now let’s backtrack: one night, Cole’s awakened by a teenage ghost girl, Kyra (Mischa Barton) vomiting. Cole goes to the girl’s funeral and finds a tape she set up in her bedroom that recorded her mother (Angelica Page) systematically poisoning her. Cole takes the tape and gives it to Kyra’s father (Greg Wood). The father watches it and learns how his daughter died. He confronts his wife.

While my first two points are largely nitpicks, this one does annoy me because it takes this fantastic story about a boy coming to grips with what he can do, and then uses those abilities to turn him into a superhero who rights wrongs and solves crime. That feels like a totally different story.

When we hear about spiritual mediums, the primary motivation behind them (whether you believe in them or not) is to deliver some message of solace from beyond.

I would’ve preferred if The Sixth Sense fleshed out the estrangement between Lynn and her mother, and used Cole as a means for them to reconcile and find peace. That feels truer to the story, which is an emotional, intellectual, and spiritual one, rather than a quest-based objective.

Having said all that, I did see The Sixth Sense again not too long ago and still thoroughly enjoyed it.

It’s a great story that holds up well.