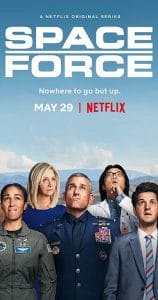 is going to be a review in two halves.

Originally, I was going to watch only a handful of episodes of Space Force to be fair in providing a review.

But then it became one of those shows where I was hooked to see what storytelling atrocity it would commit next. I hadn’t seen anything so bad on television since Star Trek: Picard (and Star Trek: Discovery before it).

I couldn’t look away …

Halfway through its first season, the show ate itself, and reincarnated as something better.

(I only wish Star Trek: Picard and Star Trek: Discovery could do the same.)

Steve Carell plays General Mark R. Naird, who’s promoted to a four-star general and charged with relocating (with his family) to Colorado to lead Space Force, a new branch of the American military focused on (as the name suggests) space – and, primarily, colonisation of the moon. John Malkovich plays Dr. Adrian Mallory, his science advisor. Lisa Kudrow plays Naird’s wife, Maggie, who somehow ends up in prison when the story jumps one year ahead to Colorado (the writers decide to keep the why a mystery, but given she has a forty-year sentence, it must be something big), and Diana Silvers players Erin, their troublesome teenage daughter. Then there’s an ensemble cast portraying the various eggheads and brass who help and hinder the Space Force project.

I appreciate that television pilots don’t always hit the ground running. I loathed The Orville’s pilot and didn’t bother watching anymore of it for months. But it evolved into excellent science fiction television. I can’t wait for the next season. Go back to the 1980s, and something like Star Trek: The Next Generation took three seasons (that was seventy-three episodes back then) to really find its way.

In TNG’s defence, it had to win over the existing fanbase and convince them that there could be a final frontier beyond Star Trek: The Original Series, it was pioneering genre (television) science fiction in the late 1980s when that was a barren landscape, and those three seasons weren’t objectionable. They had some good episodes, some okay ones, and really only one truly bad episode (a clips show that closed out season two entitled Shades of Gray).

So I’ll forgive Space Force’s shaky start, even if as a pilot it hit the ground and crashed and burned.

The problem with the pilot and the first half of the season is it relies on a single conceit to carry the premise: that Steve Carrell – yet again – plays a buffoon in charge of competent people. (Well, to be fair, there are other dummies and blowhards around him.)

Now you can make the dumb people joke work as a parody: Zoolander parodies that models are airheads who rely on their looks; Anchorman: The Legend of Ron Burgundy parodies that presenters are just mouthpieces who recite the news.

When these characters are removed from their comfort zone, they’re forced to grow in some way. They might still be stupid, but they take ownership of their lives and their plight. They move forward and exceed beyond their limitations. We cheer for them because they become something greater than they were.

Where this conceit doesn’t work is when you’re expected to believe a buffoon has succeeded despite their buffoonery – especially when their buffoonery should, in fact, see that they’re weeded out.

In Zoolander and the first Anchorman, being an idiot doesn’t matter, because both stories are about selling an image. It doesn’t matter (in those stories) who they are on the inside.

Anchorman 2: The Legend Continues (2013) is a good precautionary tale about pushing the premise too far. Now, the characters are such idiots, you struggle to believe they could function in everyday society. This is when you transcend parody and spoof and enter a new genre, which I’ll call lobotomy. We’re meant to laugh at the inordinate dumbness, but I think most of us cringe that they’d even attempt such jokes, and query how these characters have gotten to where they are.

For half of the first season, Space Force employs (if not copies) the same formula Carell used in The Office. The difference is in The Office, Carell’s Michael Scott lets his people do their jobs. The office works fine in spite of Michael. That’s not the case in the first half of Space Force‘s season one, given Naird makes Scott look like Elon Musk, and is constantly overseeing and butting in on everything with a brashness that is so annoying you wish somebody would throttle him.

If you look at something like Get Smart as a comparison, Maxwell Smart (Don Adams) is clumsy and (for the want of a term) absent-minded, but he’s also a gun agent. He works things out. He trusts people who help him. Also, Get Smart is a smart comedy. Too many people recognise it only for its many catchphrases, but there is plenty of satire, spoof, and wittiness, too.

Leslie Nielsen’s Frank Drebin – in Police Squad! and the three Naked Gun movies – also pushes the moron boundary, but again, whether it’s through design or luck, Drebin’s competent at his job. He doesn’t override his fellow characters. There’s a deadpan naivety to Drebin which endears him to us.

None of that is present in the first half of Space Force’s season one. There are attempts at satire, but they fall flat because they’re couched in idiocy. Satire is smart. Take The Larry Sanders Show for example. Larry Sanders (Garry Shandling) might be vain and sometimes clueless about the real world, but he’s a comic genius in his role as late night talk show host. His producer, Arty (Rip Torn) shields him from anything that might detract from his performance. His crew support him because it keeps them working.

With The Orville, the jokes in the early episodes are often tacky and out-of-place. But the reason The Orville evolves is that all the parts are there in the pilot. The characters grow into strong personalities. Humour is often derived from the various cultural idiosyncrasies. The characters approach, treat, and deal with situations differently. As an ensemble, the characters challenge one another, and stimulate storylines.

I had no hope that Space Force could do the same.

The second half of the season abruptly changes the dynamics: Naird remains a buffoon, but more so in terms of military bluster – he’s a military man struggling to reconcile scientific endeavours. They pare back his boorishness. In the first half of the season, we’d get glimpses into Naird’s humanity. Now these are explored, giving him moments of heartfelt insight relating to his aspirations and his family – moments that connect him and endear him to the audience.

John Malkovich is great – even in the first half of the season when the show is misfiring. Whenever he’s on screen as Dr. Mallory, the stories always gain gravitas and – which might be surprising for Malkovich, who often plays edgy offbeat characters – heart. He tries to provide the satirical commentary on whatever’s happening. Malkovich and Carell have good chemistry and because their characters are such stark contrasts, they generate conflict and drama as they try to nut out the problems, often finding solutions somewhere in-between their viewpoints.

It feels as if at some point during the filming of early episodes, somebody looked at what they were doing, and made a creative decision to stop using the template, and reinvent Naird, as well as the season’s arc. The Chinese are introduced early as antagonists who are ahead of the Americans in the space race, but then their role is beefed up. There are still flashes of dumb, but they do find a genuine voice behind the storytelling that is truer to what a show like this should be using.

I’d give the first half of season one a 1 out of 10, and the second half a 6 (and trending upwards if they keep up the same narrative).

A Look Back: The Sixth Sense

A Look Back: Ghost