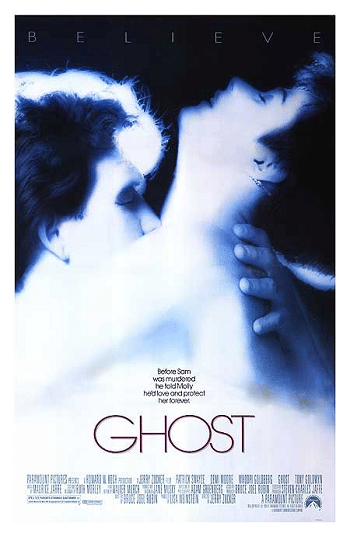 Sam Wheat (Patrick Swayze) and Molly Jensen (Demi Moore) are a young couple who move into and renovate a Manhattan apartment. One night when they’re out, a mugger, Willy Lopez (Rick Aviles), attacks them. Sam tries to fight back and is killed. He suddenly finds himself out of his body, watching Molly cry over his corpse.

Confused, Sam (now a ghost) stays near Molly but can’t speak to her – until he meets medium, Oda Mae Brown (Whoopi Goldberg), a charlatan psychic who is shocked to learn she can communicate with the dead. Sam convinces her to pass on his messages to Molly. Molly is initially doubtful.

Sam then learns the mugging was arranged by his close friend, Carl Bruner (Tony Goldwyn), to try retrieve a notebook with passcodes to the computers at the bank where they work. Carl has embezzled millions, but can’t access the files.

This film does so many things right. Casting is perfect. While Whoopi Goldberg got the major plaudits for playing Oda Mae, Demi Moore is awesome as the grieving, confused partner, and Swayze is perfect as the frightened, vulnerable ghost. Also, Goldwyn – who comes across as so likeable – has just the right hint of untrustworthiness.

The dynamics of the story work so well. If it was too heavy-handed, too schmaltzy, or too dark, it easily could’ve come apart. But there’s a real subtlety to how the events unfold, and the separation of the physical and noncorporeal world is brilliant in that Sam and Molly can occupy the same space, but Molly has no awareness of Sam’s existence. This is frustrating for Sam, who no longer belongs to this world but is still trying to connect to it.

The subplot about the embezzlement also provides a nice underpinning. Whereas my criticism with The Sixth Sense (1999) is that the genre subplot (Cole solving the vomiting girl’s murder) is thrown in to reconcile that Cole’s abilities have a purpose, here the subplot is woven in from the very beginning, intertwines with the murder, and gradually unfolds to drive the story through its third act.

This is where my issues are.

Throughout, Sam sees the white light – ostensibly heaven, or where good people go. One of the ghosts he meets references there’s another place. When Willy dies, screeching shadows rise up from the road and drag him, screaming, to that other place. That scene itself – in terms of the way it’s handled and the fear it generates – is unnerving.

But how does Willy die?

Sam learns how to interact with the physical world and literally harangues Willy to his death.

Later, when Carl threatens Molly’s life, Sam harasses him until a broken window slams closed on him and kills him.

My issue is that Sam is never in any danger in either encounter. He’s dead. They can’t do anything to him. While Carl threatens Molly’s life, Carl can’t see Sam. Carl can’t hear Sam. It’s not the traditional stand-off where the bad guy holds a weapon on the hostage, and the good guy can’t do anything for fear the hostage will be hurt. Carl has no idea where Sam is at any time. Sam could easily incapacitate him. But instead Sam bullies and terrifies him.

While the counter might be that Carl hired Willy, and Willy killed Sam, so Sam is justified in his responses, surely the afterlife isn’t about exacting revenge and murder – because that’s what this is on both occasions. If Sam was still alive and he did the same things to these two, leading to their deaths, he’d be culpable.

It just feels like in tying up the embezzlement and murder plot, Ghost becomes an action flick and finds ways to manufacture fight scenes, which don’t fit what precedes it – this beautiful story about a love that transcends death.

At the close of the movie, a white light appears. Molly and Oda Mae see Sam. It’s a poignant moment. Sam talks about taking love with him into the afterlife.

Yeah, and the two accessories to murder.

A Look Back: Raiders of the Lost Ark