I’ve been going through a lot of movies in lockdown – a sprinkling of newer movies, some older ones I’ve never seen or saw so long ago I can hardly remember them, as well as movies I love which I thought it would be time to re-watch. 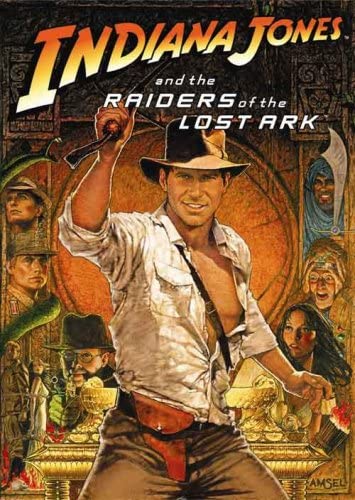 I first saw this in 1982 as part of a high school class trip to the city – this is when the city had an almost-exclusive monopoly on cinemas, whereas now you find them in every shopping plaza. The teacher had been looking for a movie based around some topic or other – it was so long ago, I don’t remember. But a friend suggested Raiders, and away we went.

As a twelve-year-old, I didn’t know anything going into this movie. I knew very little about George Lucas and Steven Spielberg, and nothing about the Ark of the Covenant. About all I did know was that the movie starred Han Solo (Harrison Ford) from Star Wars. You can’t get that ignorance anymore, which is a shame, because there’s something to be said about walking into a cinema with no knowledge, no expectation, and no prejudices.

Even though I’ve seen this movie umpteen times, even though I can quote the bulk of the dialogue, and even though the person who watched it this time is older and more cynical, this re-watch still thrilled me and entertained me just as it had when I first saw it. And, no, that’s not just nostalgia speaking. It’s because this is a great film.

Indiana Jones (Ford) is a swashbuckling archaeologist. From the first scene, we’re introduced to high action, danger, and – most importantly – Indy’s expertise. We see he’s composed, he’s knowledgeable, that he’s skilled, and he has an ongoing rivalry with a villainous archaeologist, Belloq (Paul Freeman). This tells us more about Indy in ten minutes than the Star Wars Sequel Trilogy does for any of its leads in nine hours.

The CIA inform Indy that Adolf Hitler and the Nazis are after the Ark of the Covenant, where the ruins of the Ten Commandments are stored. Whoever carries the Ark will wield unspeakable power. This is such a beautifully done scene as Indy and his friend, confidante, and boss, Marcus Brody (Denholm Elliott) brief the CIA suits about the Ark. You get a sense of awe and mystique and gravity that what Indy’s about to pursue has global implications.

From here, the story leaps into the adventure as Indy goes to Nepal and tracks down Marion Ravenwood (Karen Allen), an old flame, and the daughter of Indy’s former mentor, Abner Ravenwood, and asks her about an amulet which’ll help him find the Ark. Cue Nazis. We’re introduced to another villain, Toht (Ronald Lacey), and shown that Marion is a tough, uncompromising person in her own right.

I won’t go through the entire film, because so much happens. The action is frenetic, but the story slows down whenever the characters need to investigate leads, or have dramatic interactions. Everything is always moving forward – whether it’s the plot, or just the character dynamics. There’s none of this Star Wars: Episode VII – The Force Awakens bullshit that when a pivotal plot point does come up, it’s brushed off as “A good question … for another time” and never answered – a motif that runs throughout that entire Sequel Trilogy.

Casting is perfect. Ford shows why he became one of the biggest stars in the world for a while through the 1980s and 1990s. He has charisma, presence, and is a seriously good actor. He sells whatever’s needed – action hero, intellectual, or lover. Karen Allen is magnificent. She plays a character who Indy (and Ford) might’ve overshadowed, but she has every bit of stature that he does.

All the supporting cast are brilliant, from Denholm’s solemn Marcus Brody to Indy’s digger friend, Sallah (the always-engaging John Rhys-Davies) to the villains. They all have roles to play that contribute to the story in some meaningful way. (I could throw in another Star Wars Sequel Trilogy reference here how most of the supporting characters do nothing.)

As far as the villains go, they’re layered and motivated. While Belloq is working for the Nazis, he’s primarily interested in the archaeological significance of the Ark. Toht is the stereotypical villain in black, but is sinister and creepy the whole time. And Wolf Kahler as Colonel Dietrich represents the coldness and brutality of the Nazis seeking a power to rule the Earth.

Add to that Spielberg’s masterful direction – starting from the very first shot where we only catch glimpses of Indy. When one of Indy’s porters draws a gun on him, Indy cracks his whip and disarms. The porter runs off. Indy steps into the light and we see our hero for the first time. What an introduction.

Let’s not forget John Williams’s rousing score – a theme that’s become iconic in its own right (as pretty much all Williams’s themes have). It sets the tone for the period, captures the spirit of the story, and lifts the entire film into a new strata.

If I have any quibble it’s that after Indy and Sallah find the Ark’s resting place in the Tanis map room, they walk through the Nazi dig site, and Indy detours randomly into one tent to find Marion bound there – it seemed she had been killed earlier. That’s incredible luck (to find her) given all the tents he could’ve ducked into.

However, I do consider it a tiny quibble for one big reason: it’s in no way used to move the plot, a la Star Trek (2009) where James Kirk (Chris Pine) gets chased by a snow monster and flees into a cave, only to find Spock Prime (Leonard Nimoy) – this story can only unfold from this point due to this chance encounter. If Spock Prime hadn’t been in that cave, Kirk would still be marooned there to this day.

If anything, Indy’s discovery adds a bit of dramatic romantic tension later, when Indy and Marion are fighting the snakes in the Well of Souls. I do wonder why they didn’t reveal Marion was still alive in this scene. Was it because they wanted to show Indy’s jealous side because Marion is wearing a garment Belloq gave her? I’m unsure.

Indiana Jones and the Raiders of the Lost Ark remains a brilliant action flick, and outshines a lot of the stuff released today – particularly movies that try to mimic its swashbuckling, heroic adventure and dashing lead without understanding how or why any of it works.

A Look Back: Ghost

Why Superman II Still Has the Best Ending Ever