Although it’s forty years old, I still rate the climax of Superman II (1980) as the best climax to any superhero film. It does something that the numerous superhero movies since have never bettered: it surprises us. 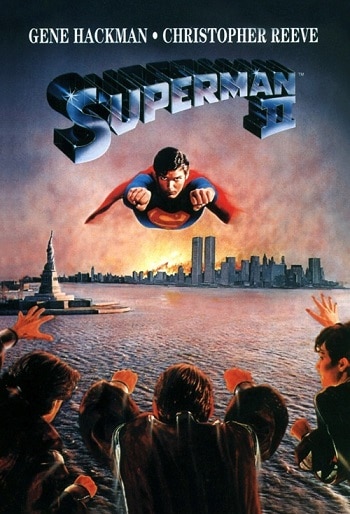 One of my issues with the superhero genre is that too often, the final battle is won through sheer will and/or strength.

In The Dark Knight Rises (2012), Batman’s victory can only come through physically besting Bane. In The Dark Knight (2008) – which is meant to be a test of wills and intellect, since the Joker confesses he can’t win a fist fight against Batman – Batman still has to physically incapacitate him.

In Man of Steel (2013), the Krypton world-building machine is terraforming Earth into Krypton. Superman lies at the heart of its ray. In the Krypton-like atmosphere, he should be powerless. But he wills himself to overcome its effects, fly up, and destroy the world-building machine. Then, in a fight with Zod, he snaps Zod’s neck to end the conflict. In Batman v Superman: Dawn of Justice (2016), Superman wills himself to overcome the effects of the kryptonite spear he carries, then thrusts it into Doomsday’s body.

Wonder Woman (2017) doesn’t offer us anything more complex. In the final battle, Aries is overpowering Wonder Woman. He’s too strong. But she wills herself to find some hidden reserve of strength, fights off Aries, and then defeats him.

Go over to Avengers: Endgame (2019), and the whole third act is a battle between the forces of good and not-so-good. Each hero attempts to tackle Thanos, but he fights them off. Iron Man launches himself at Thanos and sneakily tears the Infinity Stones off his gauntlet. This is cool in that it’s different, but I would also argue that not one of us knew the Infinity Stones were so easily removable, so it’s a small cheat.

In each Iron Man movie, there is some sort of boss fight at the end. The same happens in Captain Marvel (2019). Even in an offbeat superhero movie like Super (2010), the Crimson Bolt only succeeds through a physical assault on the villains.

It’s a tried formula, and I don’t use it to depreciate these movies – well, not all of them. Some of these movies are great. The Dark Knight plays a chess game between Batman and Joker, so the skirmishes offer context. Super is very much a reinterpretation of Martin Scorsese’s Taxi Driver (1976) – it builds a violent world that understands only one language.

But Superman II – featuring a superhero whose greatest asset, arguably, is his strength – dismisses all that.

And it’s all built so beautifully – and, more importantly, organically.

Are there fights between Superman and the villains Zod, Ursa, and Non? Yes. There is an exhaustive fight over Metropolis. But unlike Man of Steel, which wreaks havoc to viscerally impress upon us the extent of the destruction, Superman II uses the battle as a lesson to Superman: if he fights the Kryptonians in the city, innocent people will die. So he does the only logical thing: he flees, and lures them to pursue.

Earlier in Superman II, Superman forsakes his powers. He wants to be human so he can enjoy a human life with human luxuries – notably love, and a relationship with Lois Lane. When he steps into the crystal chamber in the Fortress of Solitude and exposes himself to the Kryptonian sunlight, he emerges mortal. We don’t see this as foreshadowing. We see it only as a sacrifice he makes to be with Lois.

Even his ill-fated altercation in the diner with the bully is a lesson for Clark: life isn’t fair. There are bad people out there, and they are at the mercy of the strong and the cruel and the wicked – possibly a perspective he never appreciated as Superman, but which he experiences now as the mortal Clark. It’s a metaphor for how the Kryptonians are conquering Earth, and how innocent people will suffer under their tyranny.

The lights flash in the Fortress of Solitude. We saw this earlier. How will Superman survive?

He emerges, slumped, seemingly defeated. Zod commands Superman to kneel and take his hand in fealty. Superman kneels, takes Zod’s hand, and crunches it. John Williams’s magnificent score pipes in. Superman picks Zod up above his head and throws him into an ice wall.

As Luthor works out what’s happened, he explains it to himself (but for the edification of the audience): the lights (the Kryptonian Sun) flashed throughout the Fortress of Solitude, while Superman was safe inside the crystal chamber. Superman had switched the mechanism earlier, and enlisted Luthor’s help knowing that Luthor would betray him.

Many people complain that Superman is too strong, that it’s too hard to create anything that can threaten him, and that makes him uninteresting.

Superman II proves how well you can write Superman: they out-numbered him, so physical prowess became moot; they threatened those he loved, so he was compromised regardless; and they introduced a means to de-power him. And on top of all this, the Kryptonians were planning to enslave the world. You couldn’t have higher stakes.

And that’s special for a genre that often relies on blunt force.

A Look Back: Raiders of the Lost Ark

A Look Back: James Bond