Ian Fleming’s James Bond was a burned out, hard drinking, womanizing secret agent who was a spy for MI6, had a license to kill, and fought the independent organization known as SPECTRE (SPecial Executive for Counter-intelligence, Terrorism, Revenge, and Extortion). 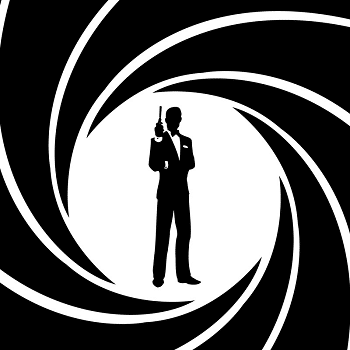 He lived in this cool (from a creative standpoint) Cold War era when the threat of nuclear between the US and Russia seemed imminent, and everybody was paranoid about spying. Being British, Bond was also the gentleman’s spy – knowledgeable, seductive, and always charming. He always felt more cultured than those he was investigating.

The first Bond movie, Dr. No, screened in 1962 and starred Sean Connery as Bond. Connery was suave and composed and had just that right hint of ruthlessness. Fleming liked Connery’s portrayal so much that he incorporated Connery’s native Scotland into Bond’s ancestry.

The early adventures were generally grounded as espionage action/thrillers. Connery became the consummate Bond. The second movie, From Russia with Love (1963), remains unparalleled in the Bond pantheon. It has a believable story, two brilliant villains in Donald ‘Red’ Grant (the inestimable Robert Shaw), and Rosa Klebb (Lotte Lenya), and tension throughout.

As Connery’s tenure went on, he grew disillusioned with the franchise due to the growing reliance on gadgetry. In his final (official) Bond, Diamonds Are Forever (1971), he drifts through the story, often looking disinterested. The movie is also this weird panache of styles, as if they didn’t know how to portray it as the first Bond in the 1970s.

When Roger Moore took over with Live and Let Die (1973), the story still tonally felt like it should be a Connery Bond. Moore’s third film, The Spy Who Loved Me (1977), is arguably his best outing, but it has cartoonish elements, such as the introduction of Jaws (Richard Kiel) as a behemoth villain with steel teeth, and a secret underwater base. The overall tone also feels lighter. From here, Moore’s outings become this conflict of grounded espionage and outlandish villains, stunts, and gadgets.

Behind the scenes there was a protracted legal dispute over rights and the use of SPECTRE. For Your Eyes Only (1981) opens with Bond killing off Blofeld, which was the filmmakers’ way of proclaiming that they were done with Blofeld and SPECTRE – and that they didn’t need them.

This is when the series starts to go awry.

Then the Cold War ended. That meant Russians were no longer the go-to villain of choice in spy thrillers. This hurt storytelling everywhere. Stories had to do nothing but introduce a character as Russian, and you immediately distrusted them. They had mystique, menace and stature. (The Russians were probably making movies depicting Americans the same way.)

And this is where Bond fell into a quandary.

Realising that Bond had become too cartoonish, the filmmakers tried to ground Timothy Dalton’s Bond. Dalton played him as darker and more serious. Several people proclaimed that Dalton’s portrayal is the closest reflection of Fleming’s character.  Some audiences found it too flat after Moore’s light-heartedness.

But the biggest problem here is the landscape. Moore had Bond currency, so his presence carried the character through the demise of SPECTRE and the Cold War – how well is up to each individual’s interpretation. I always felt despite Moore’s obvious age, his final outing, A View to a Kill (1985) is a good Bond, appreciated by Christopher Walken’s arch-villain Max Zorin, and Grace Jones ’s May Day.

But the only familiar touchstones that Dalton had were Robert Brown as M, and Desmond Llewelyn as Q – and they are only ever minor parts anyway. Even Lois Maxwell’s Miss Moneypenny is gone, replaced by Caroline Bliss. Due to the AIDS paranoia at the time, Bond’s womanising is curtailed in The Living Daylights (1987). There’s no Cold War to provide atmosphere. There’s no SPECTRE. The landscape feels empty – perhaps why Bond tackles a drug baron in Licence to Kill (1989).

Pierce Brosnan’s first outing as Bond in GoldenEye (1995) is a solid story (it was originally written for Dalton), but now Judi Dench portrays M. Llewelyn’s Q is the last holdover to the previous era. Bond’s sensibilities have also changed. He loses his edge. He becomes, well, any other character. The stories rely on ridiculous gadgetry, such as an invisible car.

Come Daniel Craig’s debut in Casino Royale (2006), the filmmakers decided to hard-reboot the series. The slate is wiped clean (although, somehow, Judi Dench remains as M). The stories become grounded, which is a laudable choice. For several movies, they build up the mystique of the Quantum organization … and then summarily ditch it.

Now this is a strange move, because the introduction of Quantum suggests the filmmakers realised that Bond needs a regular antagonist. Just as Batman has the Joker, and Superman has Lex Luthor, Bond needs a constant in the world of espionage. That constant carries with it marquee. Time doesn’t have to be spent exploring backstories if they can just introduce somebody or something that already has that stature.

Behind the scenes, the long-standing legal dispute had been settled, so the filmmakers then decide to reintroduce SPECTRE. This was a great move.  In Spectre (2015), Bond learns about the existence of this mysterious organization, immediately infiltrates it, discovers Blofeld (Christoph Waltz), captures him … and then we learn that they have a familial connection.

But the rest? Way to systematically devalue an icon.

Bond – as a property – has lost its soul. Outside of the name, the character has no relationship to the early movies or his literary source. It’s fine that characters are reinvented – look at superhero properties, which are constantly rebooted – but they have failed to reinvent Bond as anybody interesting, or which personifies who he is and what made him a pop culture icon.

The landscape around him is equally bland. Each movie, he’s pointed at the villain of the week, and set loose. Obviously, you don’t want to rely on a single person to be the villain every movie – Superman and Batman both have rogues galleries – but the plots have become disconnected from the grandeur they once enjoyed. They feel formulaic: villain, hench-person, love interest, plot. And just attempt to play to the extremes, as if that’ll generate chemistry.

The filmmakers have failed to adapt with what’s happening in the real world over the years. Yes, they’ve struck things from the universe – usually so they don’t cause offense. Well, okay, but they haven’t offered anything as a replacement. So all that exists is this vacuum. They pour things into it (like the hard reboot, SPECTRE, Blofeld) without any real system or thought. Those things then disappear into the vacuum.

It’s storytelling. You can do anything with the character and the property. For example, once the Cold War ended, why not create a new independent terrorist organization? You would think there would’ve been a lot of spies who were suddenly obsolete. Perhaps somebody mobilized them, made them terrorists for hire (like SPECTRE), and they were run by a hierarchy that Bond systematically tried to take down story after story.

Why can’t Bond still be a hard-drinking widow who’s on edge, ruthless but charming, and always just that one mission away from quitting? They’ve done this to an extent with Craig, but it feels one-dimensional. Now, he simply comes across as if he doesn’t like himself, what he’s doing, or, well, pretty much anything.

In License to Kill, Felix (David Hedison) and Della (Priscilla Barnes) reference that Bond was married; Bond (Dalton) has a sudden look of pain and regret. In those several seconds, we understand that despite Bond’s vocation and his attitude, he’s human and carries this anguish. It’s more character development than anything they’ve done in the four movies with Craig.

With the new Bond imminent and the behind-the-scenes maneuvering that has gone on, it just feels like we’re going to get another passively reactive adventure that stands for nothing, introduces narrative choices to please contemporary demands, and that we’ll forget the moment we walk out of the cinema.

Why Superman II Still Has the Best Ending Ever

A Look Back: Rocky V