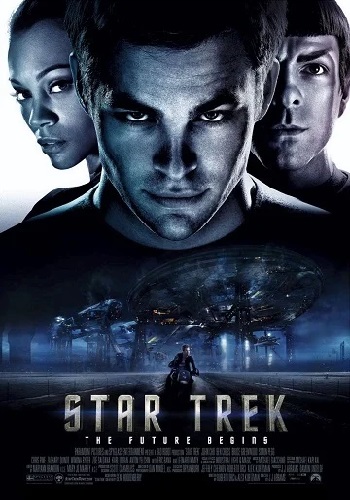 JJ Abrams is quoted as saying that he never got Star Trek, which makes him an odd choice to reboot The Original Series through a feature in 2009.

People credit him for making Star Trek more accessible. I think this is the polite way of saying it was so dumbed down, that everybody was drawn to the pretty explosions and sweet, sweet visuals. The problem with that aesthetic beauty is that it can only last so long. When your story has no real identity of its own, it blurs into all the other generic science-fiction action movies that are also pretty to look at but have so little substance behind them that they’re quickly forgotten.

So here’s Star Trek‘s world-build: in the future, the Romulan sun is about to go supernova. Spock Prime (Leonard Nimoy) tries to save it by injecting the sun with “red matter”, but fails. The sun, like this premise, blows. Nero (Eric Bana), a Romulan commanding a mining ship, the Narada, and Spock are caught in a black hole and thrown back into different points of the past.

The Narada encounters the USS Kelvin. This becomes the divergence of the timeline – when everything breaks from the canon we know.

Due to Romulus’s destruction, Nero wants vengeance against Spock. (Going by this movie and Star Trek: Picard, the Romulans have a victim mentality against anybody who tried to help them but didn’t succeed. Morons.)

Nero asks the crew of the Kelvin about Spock. They don’t know him – this is before Spock’s time. After some pointless back and forth, Nero kills the Kelvin’s captain. The Kelvin’s First Officer, Commander George Kirk (Chris Helmsworth), orders the crew to abandon ship. As his wife flees on an escape pod, she gives birth to James. George Kirk then rams the Narada and dies, and takes no further part in this adventure. Oh, how I envy him.

Twenty years later, Spock (Zachary Quinto) serves aboard the USS Enterprise. James Kirk (Chris Pine) comes aboard as a graduate from Starfleet Academy. It’s astonishing Kirk’s followed the same career path given his timeline is so radically altered, and in this film his stepfather is an asshole and Kirk is prone to disobedience and larceny. Anyway, Kirk and Spock argue, then bond, and then defeat Nero and the Narada.

What is “red matter”? More bullshit tech to facilitate the storyline. It’s supposedly extremely volatile. Spock needs only a single drop for his plan, and yet he brings the equivalent of a keg’s worth.

Nero and the Narada then come back in time, can’t find Spock, and do what? Just bum around for twenty years until Spock grows up and they can kill him? This is the plot? Why not go to Vulcan and destroy it right now? They do it later anyway, and destroying the birthplace of Spock is likely to kill him (unless his parents are off-world). Why not destroy Earth? Why not go on a rampage and become conquerors of the galaxy, since your tech is so much better than everybody else’s? Why not go to Romulus and warn them? Why not work on a way of getting home (given you have twenty years to do it)? Why not go to the Federation and explain what happened, and use the time to evacuate Romulus?

There are so many things that Nero and the Narada could do and their choice is apparently to do … nothing.

On the flip side, the survivors of the USS Kelvin would be debriefed. How do they not report that this big Romulan ship attacked them? How does Starfleet not go out and look for it? Why don’t they approach the Romulan Empire and ask about it? This would be a significant event during this time period. Imagine the Russians sank a US aircraft carrier. Do you think the United States wouldn’t follow that up?

At the very least, why don’t Starfleet mark down that the Romulans came looking for “Spock”, and see if there’s any Spock in Starfleet? If there’s not, wouldn’t you monitor the people coming through just in case? As it is, they know the Vulcan Ambassador Sarek. Does nobody make the connection that he has a son named Spock? Is that too tenuous? Well, a Romulan ship just openly destroyed one of your starships. Don’t tell me your intelligence section wouldn’t be following every lead to learn more.

Like Nero and the Narada, Starfleet’s course of action is to do … nothing.

Twenty years later, Kirk graduates from Starfleet Academy. And then after an unbelievable series of events over a very short space of time, he’s put in charge of the flagship, Enterprise? There is not a single other officer in the entirety of Starfleet who should have that command? He doesn’t start as an ensign and work his way up? There’s not an experienced captain who gets the command, as Jean-Luc Picard does in Star Trek: The Next Generation? There’s not some prodigious commander who’s promoted to captain, a la James Kirk in The Original Series? This bullshit abandons the military infrastructure and hierarchy that The Original Series, The Original Series movies, and The Next Generation clearly establishes.

You just get to be a commanding officer straight out of Starfleet. I might go do three years in the Navy and ask for command of an aircraft carrier.

How does any of this make sense?

This is what bullshit premises do. They invite a lot of unanswerable questions.

Lots of stories deliver us premises that we’re asked to accept unconditionally, e.g. Back to the Future asks us to accept that Doc Brown built a time machine; Star Wars asks us to accept the existence of this dominant Empire. I can begrudgingly accept – as stupid as it is – that somehow, the Romulan sun went supernova quickly, creating the schism.

What’s impossible to believe and accept is everything that then has to fall into place – as well as be ignored – to make this story work.