Warning: the following is full of spoilers. Do not read if you haven’t seen the movie. I’ll be giving everything away! You have been warned. 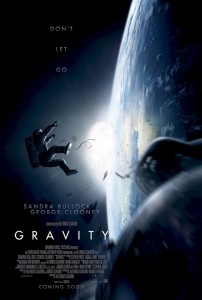 I saw Gravity the other night, and I thought it was just okay. Not horrible (like Man of Steel), not a masterpiece (as is being espoused), but just okay with the occasional really good bits.

Five things I liked about it ~

Sleuth (Sir Laurence Olivier, Michael Caine, Alec Cawthorne) is one of the best movies I’ve seen containing limited locations and actors. You can never guess what’s going to happen next. But as difficult as this story must be to tell (whilst attempting to keep it engrossing), Gravity – by virtue of what are meant to be its strengths – becomes predictable, with the only real (sustained) wonder coming from the visuals and music.

I would’ve actually preferred had the bulk of the crew survived the initial impact, and then the events of the story lopped them off one at a time, so we had no idea who might survive. Then you could’ve slotted in a scene like the one that occurs when Kowalski untethers himself to save Stone, which would’ve had meaning had they spent eighty minutes of film-time together and bonded. I understand that changes the story but, for mine, that would’ve been far more compelling.

Still, Gravity is better than most movies out there at the moment.