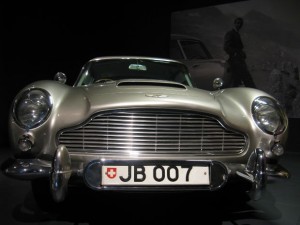 If the Bond franchise were released today, the first one would be great, the next would be okay, and by the third it’d probably be puttering. That’s the route of a lot of modern-day franchises: e.g. Transformers, the Bourne series, Lethal Weapon. By the third movie, most franchises are starting to look worn, and whenever there’s a fourth instalment, it’s usually positively comatose.

That Bond survives is because it’s an institution. It’s fifty-years-old. We just accept that instalments will be released. What’s more, the Bonds have an existent fan-base who’ll sustain them. New fans are made (or at least new fans might trial the franchise) because it’s iconic and they want to see what all the hoopla’s about.

Unfortunately, whilst the misguided reboot has helped reinvent the serial, there’s little to distinguish it from other action films. Think about it: when Bond was forging its cinematic legacy, there really wasn’t very much competition for the same genre in the same grandiose style. Now, you have Mission Impossible; you have the Bourne series; next month it’ll be something else. What recommends Bond over its peers?

Ian Fleming’s James Bond was a hard-drinking, hard-living misogynist, a patriotic cold-blooded killer who was only ever a step from throwing in the Secret Service.

This character was interesting.

Modern-day Bond is not.

I enjoyed Timothy Dalton as Bond. He could portray the ruthlessness that his predecessor, Roger Moore, couldn’t. It was a throwback to Connery’s days. Dalton’s Bond was also depicted as burnt out and does throw it in his second adventure, License to Kill. He was the closest to Fleming’s embodiment of Bond, as depicted throughout the books. But they gutted the character, eradicating all the other Bond staples. This is when Bond began metamorphosing.

Things got worse with Pierce Brosnan. The filmmakers never seemed quite sure how to handle him – cold, ruthless, and aloof, like Connery, or suave, easy-going, and progressively tongue-in-cheek like Moore. Brosnan’s a much better actor than anything he was offered in Bond. His performance in Tailor of Panama is the perfect template for Bond. Sadly, we got Brosnan’s Remington Steele – a fop masquerading as a spy. The writers, similarly, seemed apprehensive about pushing Brosnan out of this comfort-zone – much to the franchise’s detriment. Or perhaps they just weren’t comfortable in pushing the audience out of their comfort-zone in how they perceived Brosnan.

Daniel Craig has followed the same route, although he – and the filmmakers – were lauded for reintroducing a grittiness to Bond with Casino Royale. In truth, they’d already done that with Dalton and The Living Daylights, only audiences had been unreceptive to it (or perhaps unreceptive to Dalton, but more likely to the two mediocre stories) at the time. Now they were open to change as the world (and world events) had become progressively grimmer, compounded by a reinvention of the action genre, necessitating a seriousness the series had long forgotten.

Now an aside: why a reboot? You can revamp the series. They did it with Craig’s predecessors. They tailored Bond for Moore, as they did for Dalton, then Brosnan. Why the need for a reboot, which effectively wipes all the canon and starts over? The franchise had deteriorated but was by no means unsalvageable, the way you might consider the original Batman series was (shudder). The reboot’s insulting to the fans who’ve followed Bond all those years to suddenly be told those adventures don’t exist anymore.

A reboot has also caused continuity issues in Skyfall, although people tell me I’m silly to complain. Yes, sure, the actors have changed, as have the times, but they’ve always been faithful to the canon: e.g. George Lazenby’s Bond was married and widowed in On Her Majesty’s Secret Service; Connery was hell-bent on vengeance for her murder in the beginning of Diamonds are Forever; Roger Moore’s Bond lay flowers at her grave in the teaser of For Her Eyes Only; Timothy Dalton’s Bond saddened at the mentioning of marrying in Licence to Kill, prompting Felix Leiter to explain to his new wife that Bond was married once.

Casino Royale erases that. And more. It erases everything.

Then Skyfall falls into some bizarre re-rendering. Those pre-Craig adventures should no longer exist, and yet Bond has the car from Goldfinger in storage. I can accept the character exists in an ageless vacuum, but how does he own a car from a story which never happened? However, then we have Moneypenny debuting. What? And M’s office at the end is a duplication of M’s office during Connery’s time. Does this reboot coexist in some parallel dimension like JJ Abrams’ horrendous Star Trek reboot?

It seems to me that the filmmakers don’t really know how to handle Bond anymore. They’re throwing out ideas hoping something will stick and galvanise the franchise. The truth is he was a product of the Cold War, living in a time drinking, smoking, womanizing and political incorrectness were not only acceptable, but also a sign of how cool you were.

What’s more, he once had a nemesis: SPECTRE. They (and Blofeld) were to Bond what the Joker is to Batman, Lex Luthor to Superman. The first two Craig Bonds teased a new nemesis in the Quantum Organisation, and perhaps that’s a thread which they’ll pick back up at some point, but right now Bond is nemesis-less – as he has been since Moore’s Bond ditched Blofeld into a factory shute, (the eradication of SPECTRE a result of rights issues). It leaves the Bond universe populated by rent-a-villain. How many of them can you recall since Blofeld bit the dust? A handful … if that?

I love the Bond franchise and Skyfall was probably the best Bond in twenty-five years. It had a grandeur reminiscent of the earlier movies, although the bar for today’s Bond isn’t set very high. Bond’s become a bland, generic action hero, interchangeable with any number of franchise action heroes, e.g. Jason Bourne or Ethan Hunt, and yet without the distinctiveness that makes those characters unique to their respective franchises.

In moving forward with Bond, the filmmakers seriously need to look at reinfusing Bond with character, with traits that distinguish him from the pack and make him appeal to us. He doesn’t need to be a role model. He just needs to be somebody. Right now, he’s a homage to the character we loved lobotomised of all the stuff that made him compelling.

They also need to consider the universe he’s navigating and why he’s regularly required to save it. Bond villains have been lacking, and it shows in his adventures. Once upon a time, only Bond could save the day. Now he’s either represented as a novice, just another agent, or washed-up. Is this really the best they’ve got? Hell, send John McClane.

The New Universe of Star Trek.