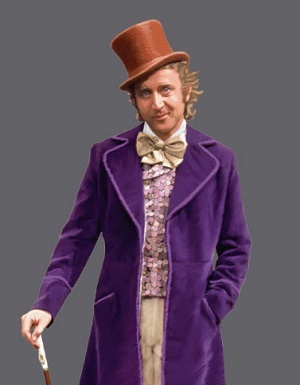 This was before pay-tv, streaming, digital channels, the internet, rentals, and, well, everything. We had four channels and that was it.

Regardless of how often I’d seen these movies, I’d always tune in again, finding something magical in each. They all, in their own way, dealt with the fantastic, and two of them featured children as protagonists. As a kid, who didn’t want to believe in magic, wonder, and boundless possibilities? These are the sort of stories you wish you could just step inside of and live for yourself.

I think these movies also taught me one valuable lesson about storytelling: that regardless of premise, you need to be able to build and maintain suspension of disbelief – that means you wouldn’t question that a cyclone could toss a house into another land where little people sang and an evil witch threatened to reign supreme; or that there could truly be a car race from New York to France, replete with dirty competitors and underhanded tactics (obviously, I’d never seen the Tour de France up to that point in my life); and that there could be a reclusive chocolate entrepreneur who was opening the doors of his mega-factory to allow kids to take a tour.

I don’t care what the story is as long as the premise can be sold to me, and then nothing happens that contravenes that logic that story has set up.

Here’s an example: Highlander (1986) tells of immortals who have lived among us for millennia, and battle one another (using swords) in pursuit of the ‘Prize’. The only way an immortal can be killed is if they’re decapitated. The victorious immortal then assumes all the knowledge, experiences, and strengths of the defeated immortal. On and on this goes, until only one immortal remains.

The movie ends when protagonist Connor MacLeod (Christopher Lambert) defeats the antagonist, Kurgan (an amazingly sinister and charismatic Clancy Brown). The Prize turns out to be that Connor becomes all-knowing – God-like, in a way, and this will help him bring peace and understanding to Earth.

Unbelievable? Well, maybe. But they sold me this premise, I’ve always been a fantasy geek, so I went all-in. And nothing that happens in Highlander contravenes the laws and physics that the story has set up.

In Highlander II: The Quickening (1991), the story is set in the near-future, where the ozone has almost been depleted, and Connor MacLeod has helped scientists build a shield to protect us from the sun’s harmful rays.

Um, okay. In a bizarre way, I can respect that they’ve tried to continue the story, rather than just rehash it, as many sequels do. So this is what Connor did with his abilities.

But then we learn that the immortals came from a planet, Zeist, where they were part of a rebellion against a tyrannical government. They were captured and exiled to Earth, where they then became immortal (wtf?), could only kill one another by decapitation (WTF?), and when only one remained he/she would become mortal and have the choice to die of old age on Earth or return to Zeist (WHAT THE FUCK?).

A friend saw Highlander II: The Quickening and told me he’d renamed it The Sickening. He warned me not to see it. My two cousins – who I saw movies with regularly – and I concluded no movie could be as bad as he said, and decided we had to see it.

My friend was not only right, but had understated his case.

And the movie just continually ruptures the suspension of disbelief. Because Connor is the last and might come back to Zeist, the antagonist from the tyrannical government dispatches assassins to eliminate him, although by this stage Connor is old, resigned, and close to dying from natural causes anyway. The assassination fails, and Connor is rejuvenated to a young age (who knows why?). A reporter, the single-named Louise (Virgina Madsen – I guess the character wasn’t important enough to warrant a surname ) had bugged Connor earlier, sees the assassination attempt and Connor’s rejuvenation, and after Connor introduces himself as coming from Zeist they begin making out – they’ve shared like twenty seconds of screen time up to that point, and she’s in no way alarmed by what she’s seen or been told. That’s some relationship development. In the first movie, Sean Connery plays Ramirez, a mentor to Connor, but is decapitated by Kurgan. In the sequel, Connor cries out, ‘Ramirez! I need you!’ and Ramirez returns, materialising from a beam of light.

How many ways do you want to insult your audience?

Highlander II: The Quickening reigned supreme as my worst commercial movie of all time for over twenty-seven years. It’s impossible to remain invested in the story. They made three more Highlander sequels, and a television series based on another immortal – all of which ignored Highlander II: The Quickening. I stand to be corrected, but it could be the first sequel disregarded from an ongoing franchise’s canon (which now happens regularly).

So whatever the story, sell me the premise, remain consistent within those established parameters, and I’m happy. I’m immersed. I’m unquestioning. But start puncturing that suspension of disbelief, and the analytical part of my mind – the part of my mind that I want switched-off because I want to just sit back and enjoy the story – becomes activated and then embarks on shit patrol. I’m no longer immersed in the story. I’m out to tear shreds.

Some people feel that certain stories don’t have to create and maintain a suspension of disbelief, because they might be light-hearted, or silly romps, or whatever the case might be. I saw Mama Mia: Here We Go Again (2018) and was repeatedly annoyed by how many coincidences and contrivances drove that story. Just because it’s this fluffy comedy doesn’t mean it can escape with poor plotting.

Jim Abrahams, David Zucker, and Jerry Zucker made a string of spoof comedies in the 1980s, such as Airplane! (1980, aka Flying High), Top Secret! (1984), The Naked Gun: From the Files of Police Squad (1988) – just to name a few. For as silly as those films can be, for as many jokes as they can cram into every scene, the stories are always well-plotted. (It’s arguably a talent people who make these sort of spoofs now have lost.)

There really shouldn’t be an excuse for lazy storytelling.

In Willy Wonka and the Chocolate Factory, Willy Wonka (Gene Wilder) is charismatic, intelligent, and manipulative. In his first appearance, he limps out with a cane. The crowd initially cheers him, but then fall silent as they pity this sad, pained figure who has shunned the public for so many years. Wonka’s cane gets stuck between some cobblestones, and he falls forward, somersaults, and bounces to his feet. The crowd cheer. It’s all an act.

Apparently, Gene Wilder suggested this entrance, because he said it set the tone for Wonka – you could never be sure if he was telling the truth. It’s a simple scene, but says so much about this character. As the story unfolds, Wonka is constantly shown as withholding information, unmoved when each of the children fall to certain curious fates, and condescending. He’s lured these people into his demesne for his own gain. Very little happens that he hasn’t foreseen.

I can fully believe this man would build a chocolate empire.

In Charlie and the Chocolate Factory (2005) – which, admittedly, is closer to Roald Dahl‘s source novel than the 1976 adaptation – Johnny Depp plays Willy Wonka as a diffident, dysfunctional, and psychologically underdeveloped adult who’s always struggling with whatever’s unfolding around him. Even when he meets the kids for the first time, he’s taken aback by their personalities, and at a loss as to how to handle them. When they challenge him, he grows petulant. He suffers flashbacks that grow tantamount to Post-Traumatic Stress Disorder.

You can have people who are socially inept, intolerant of others, and don’t fit into conventional society, but who are geniuses in a specific area. Depp’s Wonka, however, is more juvenile than the kids around him. Watching this story unfold, I could never invest because I just couldn’t believe this Willy Wonka could build any sort of empire, or that he’d even want kids to come tour it.

But so was the original.

One makes me believe that this premise could happen and makes me wish I could be a kid who discovers a golden ticket.

The other makes me believe somebody thought it would be cute to sew a whole lot of skits together and remake the book.

The Shadow in the Wind