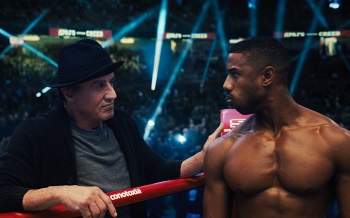 six movies spanning thirty years, a number of title defenses, as well as a series of impossible victories, what was left for the Rocky universe?

The answer is Creed (2015), a soft reboot which introduces the new lead of Adonis Johnson (Michael B. Jordan), the illegitimate son of the legendary Apollo Creed (Carl Weathers).

I actually had a similar idea about twenty years ago – continue the boxing story with one of Apollo’s sons. It’s the logical move. In Rocky Balboa (2006), we see that Rocky’s only son, Robert (Milo Ventimiglia), works in some corporate job, so it’s not like he’s going to put on the gloves. I thought Steps (James Francis Kelly III) might’ve been introduced as a backdoor character – a way to continue the franchise, if desired. But obviously that didn’t occur.

That leaves introducing a character unconnected to the universe, or spinning off from one of the existing characters. Paulie (Burt Young) is unmarried and childless, we don’t see if Mickey (Burgess Meredith) has family (although I guess they could’ve span out some grandchild, or great-grandchild), and Apollo aside, Rocky’s other opponents throughout the series have no connection to him outside of being his opponent. Apollo, on the other hand, is never the traditional antagonist, ends up becoming Rocky’s best friend, and for – real gravitas – dies in Rocky’s arms. Apollo’s the perfect candidate – well, at least his family is.

We briefly see his kids (as young children) running around in Rocky II (1979) but if we’re honouring real time – the timeline in the franchise has always been this bizarre hybrid of real time and movie time – were probably considered too old to carry on the story in Creed, which takes place 36 years later. So somebody new is needed – somebody born around the time of Apollo’s death (although this would make his son about thirty during the time of Creed. Jordan himself would’ve been 27 when they made the film).

This is not something I get, and which I feel depreciates Apollo’s legacy. Now, whenever I rewatch the original movies, I’ll be looking at him as an adulterer. Couldn’t they have made his wife Mary Anne – played by Sylvia Meals in Rocky II and Rocky IV (1985) – pregnant at the time of his death? Doesn’t that heighten the tragedy? (I’ve covered the way I would’ve written it in a 2016 blog here.)

In any case, Creed was extremely well received, although I don’t understand why. Is it a bad movie? No. Is it a good movie? Well, I don’t think so – at least not commensurate with the adulation it’s received. At best, it’s typical of the contemporary reboot – it replays the beats of its predecessor (without understanding why the beats worked), and tries to recapture lightning in a bottle.

Good luck with that.

The bulk of sporting movies employ a simple formula: an underdog battles their way to the top and takes on the champion. Nobody wants to see a movie about a champion remaining champion. There’s no journey in that. Stallone himself recognised that. In Rocky (1976), he’s the one-in-a-million shot against Apollo. In Rocky II, it’s a rematch against Apollo, who’s determined to prove the first fight was a fluke. In Rocky III (1982), a younger, hungrier, stronger challenger, Clubber Lang (Mr T), pulverises Rocky, and odds (and age) are against Rocky winning a rematch. In Rocky IV, a seven-foot tall, steroid-using, Olympic-gold-medal-winning, undefeated amateur-champion Russian, Ivan Drago (Dolph Lundgren), punches Apollo to death, and would seem an impossible opponent. Rocky V employs a different dynamic – the pupil, Tommy ‘Machine’ Gunn (Tommy Morrison) turns against the teacher – but Stallone still handicaps Rocky with brain damage. In Rocky Balboa (2006), an aged Rocky fights champion Mason ‘The Line’ Dixon (Antonio Tarver), who’s dominated the heavyweight division to the point there are no legitimate contenders remaining.

Step outside the Rocky universe, and you’ll find other examples. Miracle (2004) – based on a true story – sees the US ice hockey team take on the dominant and feared Russian team. Every Mighty Ducks movie – The Mighty Ducks (1992), D2: The Mighty Ducks (1994), and D3: The Mighty Ducks (1996) – features the misfit Ducks taking on a more-fancied opponent. The Natural (1984) is about prodigiously talented player, Roy Hobbs (Robert Redford), battling corruption, age, and a life-threatening injury just so he can have a shot at major-league baseball. Moneyball (2011) – another one based on a true story – is about the Oakland Athletics trying to compete with richer clubs. On this list goes.

Audiences want to see an unlikely opponent who’s down and out defy the odds and stand up there against the best. It’s a simple’s hero’s journey which speaks to all of us. We, too, can defy the odds. (Maybe we can’t, but for the duration of watching a movie we believe we can. That’s what moves us.)

Rocky does it perfectly. Rocky (Sylvester Stallone) is a nobody. He’s fighting lowly club fights. Whatever chances he’s had, he’s pissed them away.  The exchange he has with trainer Mickey in Mickey’s Gym is brilliant. Rocky wants to know Mickey’s problem with him. Mickey tries to balk. Rocky demands an answer. Mickey tells him (as the gym comes to a halt): Rocky had the talent to become a good fighter, but he became a ‘leg-breaker’ for a two-bit hood.

The beauty of this scene is that it happens before any opportunity has come along. Mickey doesn’t need to flatter Rocky. Mickey doesn’t need to win him over. Mickey owes him nothing. But we learn Mickey saw potential in Rocky – it even shocks Rocky, who’s taken aback. Rocky realises that if he’d applied himself, his life could’ve taken a different path. He defends himself half-heartedly, but obviously this declamation has shaken him.

When Rocky gets his chance (against Apollo) and Mickey comes to him, we know Mickey’s not just seeing this as an opportunity for himself. He had believed in Rocky. Mickey now wants to help Rocky get the best out of himself. In the journey, Rocky develops self-worth. By the time the bout is over, it’s not about whether Rocky wins or loses. It’s about him becoming somebody.

If there had been any missteps along the way, if Rocky had been knocked out early, that would’ve been it – he would’ve in all likelihood been cast back into oblivion. What would his future have been? As a nobody-boxer who lost quickly, he wouldn’t have had other chances. He might have given up boxing without that self-belief. Arguably, he might’ve gone back to working as an enforcer. His life could’ve been squandered – along with the lives of the people who’d become intertwined with him, such as Adrian (Talia Shire) and Paulie.

Creed does none of this. Adonis lives with his affluent stepmother, Mary Anne (now played by Phylicia Rashad). He’s working some white-collar job – possibly a stockbroker. Whatever it is, he’s doing well for himself. His decision to box isn’t driven by a need to survive, but because it’s just something he wants to do. He’s not happy as a stockbroker. Fine. Some stories do this well – a person who’s discontent with their life goes out to try find themselves. City Slickers (1991) is a good example.

But I cannot bond with Adonis the way I did with Rocky. Adonis is doing well for himself and has plenty of options in life. He’s doing better than the bulk of the audience. Why should I care? I sympathised with Rocky because of his plight. I empathised with his impossible dream to get somewhere in life. Adonis deciding to box is tantamount to Mickey Rourke’s decision in the 1990s to quit acting and box. Really? Okay. Good luck to you. Doesn’t really mean a lot to me, though.

The one-in-a-million-shot in Rocky might be farfetched, but they package it well enough that they sell it. Rocky going the distance with Apollo remains the best fight in the series, although it’s the shortest.

The fight itself tells a story: Rocky knocking Apollo down early (the one-in-a-million shot), then withstanding Apollo’s barrage (life beating down on him, trying to sending him back to where he came from), getting up against the odds after being knocked down (finding the strength within himself to go on despite everything that’s happened), and taking it back up to Apollo (continuing the fight and refusing, from this point on, to be bowed). Rocky goes the distance with Apollo not as a moral victory because nobody has ever done so before, but because it defines Rocky – it proves to him that he means something. It’s beautiful storytelling. If you were told nothing about the movie, muted the volume, and watched just that fight, you would pick up a lot of those beats just through what’s happening.

Creed tries to replay these beats. Adonis gets his shot at the champion, ‘Pretty’ Ricky Conlan (Tony Bellew). The thing is Adonis is young, hungry, and well-trained. If he was to decline the bout, he’d get other shots. He has time on his side. If he lost in round 1, he’s young enough to rebuild. And while his legacy is meant to work against him, the story shows it’s opening doors for him – it does so now (against Ricky Conlan) and would again.

There are no real stakes. If Adonis fails at boxing, he could go back to his cushy job. In all likelihood, he’s educated and qualified and experienced enough to pursue a range of jobs. His stepmother is rich. You may argue that Adonis’s failure could result in a loss of identity, but he has other options to pursue. Rocky didn’t. For Rocky, it was boxing, crime, or hard labour. Adonis could arguably do anything.

The Creed-Conlan fight itself is well-shot, but predictable because we’ve seen it done before (and better). Even if we hadn’t, it’s so heavily foreshadowed you know Adonis will take Conlan the distance, you know Adonis will survive a seemingly crushing knockout, you know – like in Rocky – Adonis will push Conlan at the end. Only now we don’t have the same context. Adonis doesn’t defy the odds to get up because life has battered him down, as it had Rocky; he gets up because it’s a dramatic moment to show his resilience. He doesn’t knock Conlan down to show how he’s taking the fight back to life; he knocks Conlan down because nobody ever has, and it’s the cheap heat victory he’s given (he did what nobody else ever has) as compensation for ultimately losing the fight.

One is a beautifully crafted, emotional, against-all-odds journey.

The other is about some guy who wants to box.

I know which I periodically rewatch.

Superman II vs Man of Steel

Willy Wonka vs Charlie and the Chocolate Factory