Every artform is open to interpretation. We all like different things. So I’m sure there are people who disagree with my bottom four choices. That’s okay. I understand why people love the other Rocky movies; or if they even prefer one of the Creed movies, which are slick and well-made.

I look at them from the point of view that I want them to be true to the original universe. Rocky III and Rocky IV feel as if they stray, trading substance for glitz. The Creed movies feel like they’re hitting the same beats but (for me) not generating the same emotion. They play like remakes trying to again capture lightning in a bottle. But there’s no formula that makes that happen. That’s why I see those other movies as I do.

Synopsis: Now champion and ‘domesticated’ (Mickey’s word), Rocky loses much of the hunger that drove him to the top. When a vicious contender defeats him, Rocky must rediscover his passion if he’s to win the rematch.

The performances carry this movie. Clubber (Mr T) oozes menace. Apollo shows a more compassionate side, training Rocky following the death of Mickey. Rocky is also forced to explore his own value (in the world), and it’s Adrian who helps him discover it’s not about the championship, but the person looking back at him in the mirror. It’s actually a great scene when they’re arguing on the beach, and shows Adrian’s toughness and her willingness to get in Rocky’s face to make him see reason.

Rocky III tries to explore Rocky’s loss of identity, but in this movie (and Rocky IV) Rocky never feels like the Rocky we’ve gotten to know in the predecessors (and which Rocky V recaptures – another tick for that movie). He’s not the street-wise bum trying to fumble his way through the world. He almost seems like a sophisticate. It’s meant to be part of the story’s message, but feels like it’s moved Rocky too far from who he is (or, at least, who he’s meant to be).

While the predecessors feel like stories that involve a climactic fight, Rocky III feels like a fight movie that tries to shoehorn in a story.

Highlight: Mr T as Clubber Lang is fantastic. It wouldn’t have been easy taking over from Carl Weathers as Apollo, but Mr T offers a vicious and malicious antagonist.

Lowlight: It’s an enjoyable romp, so nothing stands out as horrible. But this is where the series moves away from story and focuses more on action.

Synopsis: After brain trauma forces Rocky into retirement, he takes on a young boxer and trains him, guiding him up the ranks. But his mentee is manipulated by an unscrupulous promoter into turning against Rocky and trying to goad Rocky back into the ring.

This movie is pilloried, but I enjoy it.

Yes, after Rocky’s bankrupted by an embezzling accountant, you’d think that Rocky could recoup some of his fortune by finding a cushy commentary gig or some lush endorsements. They could’ve qualified this better. But I actually believe the bankruptcy is largely irrelevant to this story. In fact, I think they didn’t even need to pursue it. This story could happen with Rocky still rich, but moving into management and having that unfold as it does (although the poverty increases the stakes).

In a lot of ways, Rocky V reminds me of the excellent Wolverine conclusion, Logan – it’s an older Rocky, he can’t do what he used to do due to brain trauma, and thus he’s left to deal with a future he’s never contemplated, and tries to redeem himself by taking on a student at the sacrifice of his relationship with his son.

That they took the climactic fight of the ring is also laudable. This is who Rocky has always been – a product of the streets. Interestingly, it’s also the only time in the Rocky series that he’s the favourite in a fight, and he handles Tommy with ease. The only time Tommy gets the better of the fight is when he blind-sides Rocky.

As an aside, Rocky was meant to die in the final battle, but that was changed at the last minute. That might’ve elevated this movie to an entirely different level.

Highlight: After Tommy puts Paulie down in the bar, I love the confrontation between Rocky and Tommy, the promoter, Duke, saying they need to settle it in the ring, and Rocky telling Tommy, ‘My ring’s outside.’

Lowlight: Rocky loses his fortune far too easily (although I’m no accountant, so don’t know how these things work). 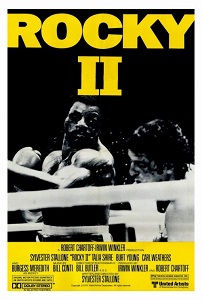 Synopsis: After losing a split decision in his title fight against Apollo, Rocky tries to live a domesticated life, marrying Adrian, becoming a father, and working a 9-to-5 job. But when he’s retrenched and Apollo – wanting to prove to the world that he didn’t carry the first fight – taunts Rocky and publicly demeans him, Rocky has no option but to climb back into the ring.

This is one of those films that has an almost impossible job because we know that the thing they’re trying to deny is going to happen (the Rocky-Apollo rematch) will happen, and given that the protagonist lost the first bout, that it’s unlikely that he will lose the rematch.

Weathers could’ve easily played a traditional antagonist given he becomes the villain, taunting Rocky back into the ring, but the story’s wonderful in humanising Apollo’s motivation. He doesn’t want to beat Rocky out of viciousness (a la Clubber Lang) or national pride (a la Ivan Drago). Rocky took him the distance and the bout ended in a split decision. Apollo wants to prove he can beat Rocky and do so easily. Apollo wants to show he’s the true champion. He wants to repair the damage to both his pride and reputation.

Rocky tries to navigate a domesticated life but finds he’s not a great fit anywhere, and that boxing gives him purpose – and his family a chance at a luxurious future. He had his shot at the world title and proved he could mix it with the best. As much as he tries to deny boxing, circumstances conspire against him.

Although the story builds to a predictable inevitability, there are a number of powerful scenes that keep the story engaging, and while the title rematch has an implausible climax (I’ve never seen a boxing match end that way) it is brilliant and dramatic.

Highlight: Take your pick – Adrian waking Rocky and telling him to ‘Win’; Mickey’s impassioned plea to Rocky in the hospital chapel to stand up and take Apollo on; Adrian’s argument with Paulie about Rocky fighting; Mickey trying to convince Rocky to retire and slapping him to prove his damaged eye is no longer up to it; Gazzo pointing at a picture on the wall of Rocky and saying, ‘Remember that guy, Rock?’ … well, this list could go on. 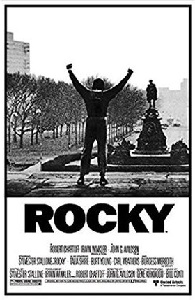 Synopsis: A boxer who’s squandered his talent and now fights small fights while working as a heavy for a loanshark gets a once-in-a-lifetime shot at the heavyweight championship of the world.

Still a masterpiece that rates up there not only with the best boxing movies going around, but the best sports movies of all time.

Compelling performances from everybody involved – Sylvester Stallone (too underrated as an actor), Talia Shire as Adrian, Burt Young as Paulie, Burgess Meredith as Mickey, and Carl Weathers as Apollo Creed.

Weathers is another underrated actor, who unfortunately got lost in that stream of musclebound action heroes populated by Stallone and Arnold Schwarzenegger in the 1980s, which lead to studios trying to clone their success with anybody who had size and/or fighting skills.

The story intertwines the perfect balance of drama, romance, conflict, and sport – in fact, we get very little of the fight, because it’s not about each individual punch thrown (which the later movies are determined to show you) but about the story the fight tells.

I love good sports movies. They’re inherent with a natural structure: an individual or team starts bad, something changes in their universe, they improve despite setbacks, they become good, and then face some sort of championship at the end.

I’m guessing the only one in my list that will drastically surprise is Rocky V. But I’ve watched the movies regularly over the years, and that one has appreciated as a good story, while several of the others have depreciated as well-made, well-paced action flicks.

Now, as I’m older, I think that list is pretty much set with me for the rest of my life.

Rating the Rocky Movies: Part I

The Premise of It All