I love the Rocky franchise. The movies range from classics to great popcorn entertainment.

When I was younger, the fights did it for me. It was just about the entertainment. But as I’ve gotten older it’s been about the substance. It’s a rare thing when a sporting movie can blend the two and find that balance.

Over the next two weeks, I’m going to rate the Rocky-universe movies, going from my least favourite to my most favourite.

There’ll be spoilers: so don’t read on unless you’ve seen all eight movies, or you don’t care about them being spoiled.

Synopsis: Now champion, Adonis Creed is shocked when Viktor Drago – the son of Ivan Drago, who killed Adonis’s father, Apollo, in the ring – emerges and wants a title shot.

What a farcical premise: after losing to Rocky Balboa, pretty much all of Russia shuns Ivan Drago. Think about this: Drago is an Olympic Gold Medallist and was an undefeated amateur champion. Russia would’ve pumped so much money and tech into him. And in his second professional bout (killing celebrated ex-champion Apollo Creed in his first) he loses to the world champion, Rocky Balboa, and Russia decides, What a dud. They shun him. His wife leaves him. And that’s the end of his career. No other country even tries to poach him and naturalise him. Instead, an embittered Drago cultivates his son to become a boxer, waiting ever-so-patiently until Rocky takes on and trains Apollo Creed’s son, Adonis, to become world champion (Drago must be clairvoyant) so the Dragos can have their revenge.

Just a terrible idea that does very little with Rocky, tries to get Adonis to learn values outside of boxing but really does nothing with him, and paints the older Ivan Drago as entirely one-dimensional until the last two minutes – his relationship with his son Viktor is a missed opportunity.

The movie also suffers the same structural issue as Rocky III: if your protagonist faces the antagonist in the middle of the movie, the protagonist has to lose, otherwise that’s the end of the story. That sets up the inevitable rematch. Gee, I wonder what’ll happen there. Unfortunately, unlike Rocky III, Creed II lacks that movie’s charisma and purpose. Rocky III established Rocky as a tried champion who’d been shielded in his defenses, and had moved away from his roots. Creed II establishes that Creed is still the same git he was in the first movie, but now has a belt.

In fact, a lot of Creed II’s beats feel like imitation – being the champion, having an opponent win the first bout convincingly, the problem pregnancy, the self-doubt, and then the rematch.

Highlight: I will give it credit for the innovative finish to the rematch bout.

Synopsis: Apollo Creed’s illegitimate son through an affair, Adonis, asks Rocky to train him. When the media discover Adonis’s identity and the celebrity of being the great Apollo Creed’s son, he’s fast-tracked into a title shot.

Sylvester Stallone understands stakes: in every Rocky movie, Rocky is fighting for something. Creed struggles in the stakes department. Here, we’re sold the premise that Apollo had a son through an extramarital affair (already a strike for me), he has a cushy job, and lives with his rich stepmother (Apollo’s wife) Mary-Anne (Phylicia Rashad). And then Adonis (Michael Jordan) wants to fight.

If he loses and bombs out of boxing, what does it cost him? Rocky had nothing in the first movie. He was a bum. Adonis could go live with his rich stepmom and get another cushy job. I understand that’s not his passion, but the point is he has a pretty comfortable safety net. So who cares if he loses?

The story then weaves in Rocky (Stallone absolutely brilliant) doing what he did in Rocky Balboa (questioning his place and usefulness in the world around him), and a contrived way to give Adonis a title shot that is so telegraphed, they might as well have written the screenplay on a mackerel and slapped us across the face with it.

Let me also go back to Adonis’s parentage: why did he have to be an illegitimate son? We saw Apollo had children – why not use one of them? Or even have Mary-Anne pregnant when Apollo is killed? Emotionally, that would’ve meant much more than Apollo’s widow adopting Adonis.

Although this movie was lauded, it didn’t engage me. Jordan’s a good actor, but his Adonis is cocky and grating. I found him hard to get behind. Apollo was cocky, but engaging. He never felt like the villain, and even when he’s thrown into that role in Rocky II he’s not actually malicious, but indignant that his integrity is questioned (that he carried the first fight).

Then there’s this forced journey that hits the right beats, without eliciting the depth, charm, and emotion of Rocky.

Highlight: Rocky deciding to let the cancer take him out. It’s so poignant to see this character who’s survived so much feel he has nothing left to fight for (and Stallone is, as already mentioned, brilliant).

Lowlight: It’s a toss-up between Adonis shadow-boxing to a YouTube video (of Apollo and Rocky’s fight) or jogging down the street while being chaperoned by motorcyclists.

Synopsis: Older and widowed, Rocky struggles with his purpose in life, and agrees to an exhibition against the reigning champion as a form of catharsis.

I’ll credit this story for trying to explore Rocky’s sense of worth and his place in the world now that he’s older and lost his wife, but the story feels unnecessary.

It was actually inspired by then-45-year-old George Foreman’s shock heavyweight title win against Michael Moorer in 1994. Stallone thought if an old Foreman could do it, then an old Rocky might have life yet. But the story feels as it evolved away from that inspiration (outside of the bout that involved an old Rocky) and became about something that might not have needed exploration.

Also, I was a bit annoyed about Adrian’s death. In three of the last four movies, Stallone uses the death of a major character to drive the story, so nothing ever feels organic. (This is maybe why I like Rocky V – I feel that story could happen regardless of the circumstances, whereas Rocky III, Rocky IV, and Rocky Balboa couldn’t tell the stories they did if those characters hadn’t died.)

Another issue is that the climactic flight lacks of the poetic ballet of all the previous bouts – I understand they tried to make it more realistic, but the fights throughout the series have never been realistic, and the juxtaposition here becomes alien.

Highlight: Rocky’s motivational speech to his son (although there are several powerful moments throughout – Rocky and Paulie talking about Adrian’s death is another, and Rocky quipping to Dixon, ‘It ain’t over until it’s over’ is pretty cool).

Lowlight: It’s not a bad film, but struggles to become a great one. If they combined, for example, Rocky’s need to fight, Adrian’s illness, and an estranged son, that could’ve been much more interesting. 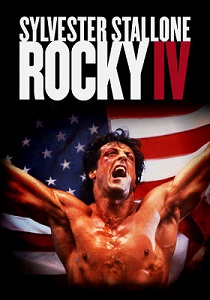 A silly romp that is typical of 1980s revenge movies, which abounded at the time. Throw in the US-Russia rivalry and, well, this writes itself.

By now, there’s not a lot to say about having Rocky on top, so the story resorts to providing the biggest physical challenge possible by introducing the biggest opponent possible: Ivan Drago (Dolph Lundgren). Coming a close second is Stallone showcasing his insanely cut physique.

The movie ends up playing out like a string of music videos that showcase training and boxing matches. It’s extremely enjoyable as bubblegum fare but feels silly compared to the others.

It is also the one movie where Adrian becomes superfluous. The use of Adrian is criticised throughout the Rocky movies, and particularly the sequels. She’s seen as redundant. I don’t get it. She may not have a glamorous career, but is that the only facet that commands definition and worth? She’s one-half of a couple – the smarter half, and the one who provides a reality check. She’s the one who turns Rocky around, whether he’s despondent (e.g. Rocky III) or blinded by emotion (Rocky V). Maybe that’s not worthy of any meaning in today’s climate.

In this movie, I agree she offers little. Here, Rocky’s going to do what Rocky’s going to do, and it’s Adrian who has to fall into the wake regardless. If she wasn’t there, the story would unfold exactly as it does. You could actually say the same about Creed with the relationship between Adonis and Bianca (Tessa Thompson) – Adonis is going to do what he does regardless. You can’t say that about Rocky II, Rocky III, and Rocky V. If Adrian’s s not there, those stories follow a different avenue (although in Rocky V, it’s more about her waking Rocky up to Tommy Gunn being a parasite).

I enjoyed each of these movies, and still have a soft spot for Rocky IV. It’s dumb but I remember raving about it when I saw it as a teenager, and it is done so well (however unrealistic the bout is) it’s enjoyable if you accept it for what it is – an 1980s revenge movie.

Highlight: Rocky’s punch that cuts Drago and stuns all of Russia. This remains seriously cool.

Lowlight: This movie contains a robot. I believe when the robot saw Rocky’s victory speech end the Cold War, the robot decided humans were easy prey and thus founded Skynet.

Next week, my top four.