My WIP has long been neglected. 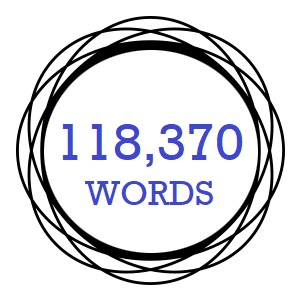 It was never my intention. Usually, when I finish anything – be it short story, novel, or screenplay – I launch straight into revision, and keep revising (reading it over and over) until I can get nothing more out of it. Then I give it a break, then start the process again with a fresh mind. When I’m certain I have nothing new left to offer, I’ll send my work out to alpha readers. Their feedback will contain stuff that I either can no longer see, or was never able to see. As an author, you have all the answers in your head. But sometimes, they either haven’t been translated successfully onto the page, or they haven’t made the journey at all.

Anyway, part of the reason I haven’t gotten into revision until now is I’ve had a few other prose things going on (some of which I’ll touch upon next week); and also had a couple of screenplays floating about that have been trying to generate interest (to be fair, they’ve gotten some, but I won’t go into that until there’s some serious heat behind them). I also had an older screenplay I thought I could give a quick revision, but thanks to a lack of synchronicity in Microsoft’s OneDrive between my laptop and my desktop, I lost about half the screenplay’s revisions and then had to start over.

But now my focus is back primarily on my WiP, and reading it I worry about the problems I’ve faced with my previous novels – writing to a genre that doesn’t really exist. An author friend said if my protagonists had been women, the books would be classified as ‘chick lit’. But the protagonists are men, and there’s no ‘bloke lit’ genre that formally exists. A novel teacher I knew suggested that westerns had constituted ‘bloke lit’. If that had been the case, then I guess you could say the same for any form of action novel, but that really then cedes into categorical genre fiction.

I spoke to a friend on Monday who asked me the difference between ‘literary’ and ‘genre’ fiction. I explained that ‘genre’ fiction usually involves a goal such as solving the murder, stopping the bomb, catching the bad guy, etc., whereas ‘literary’ fiction involved characters trying to come to terms with their own emotional/spiritual/intellectual growth. One is strongly plot driven, and the other character driven.

Often, ‘literary’ fiction is also about the language of the prose. Check out the work of A.S. Patrić, who won the 2017 Miles Franklin for his debut novel Black Rock, White City, and followed that up with Atlantic Black. I’m privileged enough to be one of the readers Alec will ask to read early drafts of his stuff, although you couldn’t tell they’re early when you read them. The construction of his prose is magnificent – and as close to faultless as you could imagine.

I like to think my actual writing (style) is commercial, although some reviews have referred to literary flourishes. Growing up, I read a lot of high fantasy and historical fantasy, which tends to be formal and flowery. I thought that was how I needed to write, and tried to emulate that (especially J.R.R. Tolkien, who was one of my idols). But reading J.D. Salinger’s The Catcher in the Rye and David Eddings’s fantasy series The Belgariad, I learned that prose could be simple and straightforward without losing its power (like Ernest Hemmingway, who I read many years later). So as I developed as a writer, I tried to pare back my prose. I’ve seen reviews cite my books as ‘easy to read’, which I take as a compliment (even if it might not be meant as one). A lot of work goes into making prose easy to read.

That leaves the definition of ‘literary’ fiction, which – honestly – I don’t get. Sure, I understand it on the most basic level of simple categorisation. That’s where the books are going to sit be told to sit. But then they’re not classifiable beyond that because the genre allegedly doesn’t exist? Surely I’m not the only author who’s written about men dealing with issues and relationships.

Off the top of my head, The Riders (by Tim Winton), Little Children (by Tom Perrotta), Music for Torching (by A.M. Homes) and Stoner (by John Williams, and this book is now a classic) explore men struggling with relationships and how they make peace with that (although Little Children and Music for Torching have multiple POVs). These types of books exist. I’m sure there are tons more. I would’ve thought that Just Another Week in Suburbia and August Falling sit with them.

Somebody once suggested to me that if we had to create a genre for my novels, then it could be called ‘Suburban Noir’. That sounds about right. (And all those aforementioned books – with the exception of The Riders, which features several international locales – would comfortably sit in such a genre.) Somebody should go out and formalise that. If you think about it, new genres do get recognised once enough people start writing about that stuff, (e.g. such as paranormal romance). And I think these books are existing without formal categorisation.

Anyway, I’m now just under halfway through revision of my WiP. I thought it would be a total mess, but it’s much cleaner than I anticipated. I need to write a new opening (although that’s for thematic reasons – I don’t think there’s anything wrong with the existing opening, and may turn it into a novelette), but (so far) the story’s working.

Song of the Curlew