In early 2017, I published a young adult novel – Pride – under my YA moniker of ‘Lazaros Zigomanis’. This is actually the name I was baptised under. 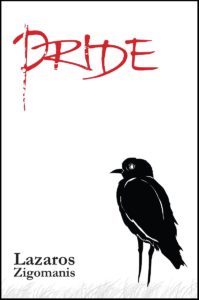 To provide some background, it was 2002. I ran a football website and the season had just finished. Collingwood had lost the grand final (there’s a shock), and I needed content for the off-season so I could maintain some readership. Therefore, I decided to serialise a story, and since my website was football-centric, I decided it was going to be a football story.

I’d already had this vague idea for about ten years, but it was originally going to be based in the AFL. I decided to relocate the setting to a smattering of small (fictional) country towns, which presumably would sit in rural Victoria. This gave me greater freedom. As usual, I planned out all the background stuff: the characters, the names of the towns, the tally of flags and wooden spooners in this competition’s history, and even the scores for the finals the year before (as I figured they might be referenced).

What emerged was Pride.

Pride is about Luke Miggs who plays football for his country football side, the Ravens. Luke still hopes he can use country football as a springboard for something better (as in an AFL career), but the Ravens have only ever been battlers. Things change when a twenty-something Indigenous man, Adam Pride, emerges from the night and tells the Ravens he wants to play for them. It’s the catalyst for change but as the season wears on, it becomes evident that Adam shares some sort of past with Claude Rankin, the tyrannical captain-coach of the reigning champions, the Scorpions. Luke, along with cadet journalist Amanda Hunt, investigate, and are shocked at what they find.

There’s my mini-synopsis without giving away spoilers. I hate spoiler-giver-awayers. Somebody did that publicly in relation to August Falling – not the major spoiler. They were proud they kept that a secret … and then gave away all these mini-spoilers about August’s background. That annoyed the hell out of me. I wanted to hit them with a glitter bomb.

Back to Pride: I submitted it around and it got rejected lots. Eventually, it was chosen as part of the 2009 Olvar Wood Fellowship, facilitated by Queensland authors Inga Simpson and Nike Bourke. Inga mentored me through a redraft. I submitted it around again. I got more rejections, although now some of them were personalised. In 2011, it was shortlisted for the Atlas Award – a publisher’s award that could lead to publication. It didn’t.

Somebody who’s always believed in Pride is my good friend Blaise van Hecke, who also happens to run her own publishing company, Busybird Publishing. While they primarily help people self-publish (and try to educate them in the process), they do publish a handful of titles traditionally each year (and now do so under the imprint Pinion Press). Blaise had always loved Pride and wanted to publish it as early as 2008. I was always worried that friendship prejudiced her decision. In the end (fast-forwarding to 2017), I agreed . It’s flattering and encouraging to have somebody believe in your work, and she’d believed in Pride for ten years while everybody else was saying no to it.

Pride had been getting periodic revisions over the years as I learned more about writing. Originally, it had been about 44,000 words. After Olvar Wood, it went to about 55,000 words. I then wanted to enter a competition that had a 50,000-word ceiling, so I pruned it. There were exhaustive edits in-between (I’d guess about thirty). But before Blaise accepted it, I’d had it edited by Inga again, which highlighted some deficiencies. And now (going into 2017) I knew a lot more than I did when I was just idling around in 2002.

I fleshed the hell out of the book. I got halfway in and my laptop died. The hard drive was irrecoverable. Usually, I back up obsessively. On this occasion, I had only one/quarter of it backed up. Now, it was either ditch the thing, or start all over. I dreaded the prospect. I’d lost some good material when the hard drive died. Now it was resignation or let anger fuel me through starting again.

I started all over.

Pride now sits at about 80,000 words. I pulled all the story back into line (there was some rather vague generalising), I fleshed out subplots and characters, and hopefully I developed the mystery. One of the things I addressed was that Inga said she felt I held back in an intimate scene. So I attacked it. If you’ve read Just Another Week in Suburbia and August Falling, you’ve probably rightly guessed I attacked it too much.

That one scene of intimacy (although it’s still tame by comparison with those others) has become problematic for the book’s existence as a Young Adult title. Compounding Pride’s woes (I bet you didn’t know that a book could have woes) is that Dennis Jones – the distributor responsible for its, well, distribution – collapsed, which obviously didn’t help. (Sadly, many publishers felt this sting.)

So over the new year, I’ve been reworking the existing book to tone down any scenes that may cause offense as a Young Adult title. The majority of the book is the same. There’s been a few other minor alterations, but nothing that fundamentally changes the story. Just that sex scene. That got the big overhaul. As in it no longer exists. The sex does. Just not the scene as it was.

Pride is now being rereleased by Busybird Publishing, but under its YA title (to distinguish it from its existing release) of Song of the Curlew.

Pride still exists, but I guess by virtue of Song of the Curlew’s existence as exclusively a YA title, it now makes Pride an adult title, although I’ve always thought of the story as a tweener – appealing to teens and up.

In that regard, I compare it To Kill a Mockingbird. I’m not saying my book is a classic or on that level, but just that it’s comparable in terms of market placement. To Kill a Mockingbird features a six-year-old protagonist, Scout, but deals with serious issues like racism and displacement. It’s a book read and enjoyed by people of all ages.

I’ve always had a soft spot for Pride. I think it’s a good story. Surprisingly, not every author feels this way about their work once it’s out in the world. Pride emerged well-formed. The things like the plot, the structure, the characters, were all working from the beginning. Even the voice was working from the beginning. I wrote other books between Pride and 2017 which I’ve abandoned, but I kept coming back to Pride.

I’ve always felt it’s an important story to tell, juggling themes like coming of age, the ramifications of the choices we make, the pursuit of dreams, the bond of family and community, and the pervasiveness of racism. If it had been accepted elsewhere and been published between 2002–2017, it would’ve been a far lesser story. I’m glad in 2017 I could do it the justice it always deserved.

I’m sure most authors feel they’d like to take one last pass at their manuscripts, even after they’ve been published. Well, Pride is now as full it can be, and I’m glad that in its new incarnation, as Song of the Curlew, it can target another market.

So here’s to Song of the Curlew.