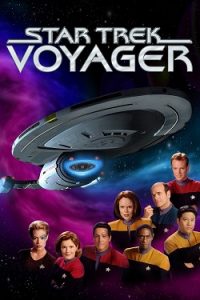 And, yes, it’s worse than Star Trek: Enterprise, which wasn’t very good either. But at least Enterprise had some interesting crew and tried to do a few things, although it annoyingly ignored canon at times. Still, that’s better than Star Trek: Voyager, which was an exercise in the writers growing far too comfortable (read: complacent) with the genre and the era.

What Works
Interesting premise, flinging the ship and crew seventy thousand light years from Federation space. One query with this is that Kirk and Picard regularly had their ships flung to the far reaches of the galaxy, and always got back within forty minutes. But at least the idea is sound.

Robert Picardo is excellent as the Doctor, and Jeri Ryan strong as Seven of Nine. Robert Beltran brings a quiet nobility to Command Chakotay, but is underused (allegedly, because Beltran was so outspoken about the direction of the show). Kate Mulgrew is a good actress and was solid as Star Trek’s first commanding female officer but, unfortunately, Captain Kathryn Janeway is a terrible character.

What Doesn’t Work
Mulgrew herself described Janeway as ‘bipolar’ to explain why she was so erratic, although apparently the reason for this were different writers had different ideas on how Janeway should be portrayed, so were always pushing their own agenda given their opportunity.

The rest of the cast is bland – Tuvok (Tim Russ) was just a Spock clone without what made Spock interesting (the half-human side). Harry Kim (Garrett Wang) was meant to be killed off a few seasons in, which shows how valued he was. B’Elanna Torres (Roxann Dawson) just seemed to run around being angry or frustrated with everybody. Tom Paris (Robert Duncan MacNeill) is likeable, but doesn’t get to do much. Kes (Jennifer Lien) walks around in a perpetually dreamy state, and Neelix (Ethan Phillips) is appalling, with little to offer once Voyager moves out of the regions he knows. All these characters become one-dimensional, even when their lives change circumstantially. They hit their beats, do their thing, and that’s it for them.

Following The Original Series, the writers struggled creating adversarial races. The Ferengi were initially laughable, and the writers could never make the Romulans work as this omnipresent threat. The Breen were often mentioned but never went anywhere. Ultimately, to create threatening aliens, the writers fell back on using a warrior archetype, which meant they just cloned the Klingons, e.g. the Jem’Hadar were just juiced-up Klingon, while the Cardassians were cultured Klingons. What helped the Cardassians come to life were two compelling characters, Gul Dukat and Elim Garak, played brilliantly by Marc Alaimo and Andrew Robinson. Through Dukat and Garak, the Cardassians gained depth. The Borg were genuinely good as mechanised Klingons. In Star Trek: Voyager, the initial threat were the Kazon, another brand of alien who were just Klingon Lite.

Initially, Janeway integrates Chakotay’s Maquis crew onto Voyager, which is meant to create conflict and tension. That’s briefly explored, but then dropped. The show then unfolds as a clone of Star Trek: Next Generation, with the crew stopping to investigate new life, new civilisations, and all that. You’d think given how far they are from home, there’d be some urgency about their journey, and that their Starfleet integrity would be tested more. It happens a few times, but never with any real complexity.

Robert Beltran was also critical of the show as it went on, saying that Janeway had grown tyrannical, that supporting characters were forgotten, and any time any situation came up, all Janeway had to do was consult Seven of Nine’s repository of Borg knowledge for a solution, thus it made the rest of them redundant.

The technobabble progressively grows out of control so that it undermines any dramatic tension. If you look at the climax of Star Trek II: The Wrath of Khan as a comparison, we have a very simple set up: the ship doesn’t have enough power to warp away before the Genesis device explodes. Spock goes down and we see him fixing something to do with the engine. The Enterprise regains power and warps away. Nice, simple, yet compelling. We understand that. Technobabble used? Zero. In Voyager, you know they’ll get out of any situation just by spouting some meaningless technobabble. It becomes a deus ex machina. Then there’s the Borg: they were intimidating in Star Trek: The Next Generation. In Star Trek: Voyager, they’ve lost any real threat. Whenever the crew of the Voyager deal with them, it’s with complete aplomb.

Finally, I’m unsure why the needed so many time travel stories. The writers have the vastness of the galaxy, they’re in uncharted space, and they still have to screw around with time travel. That goes infinitely for the finale, which has to rate as one of the laziest and most offensive finales in television history.

How I Would’ve Done It
We can keep the premise. We can keep the bulk of the characters. Tom Paris is good, but I would’ve played on him as disreputable – always looking for an angle to try to get Voyager home quicker. Cut Tuvok’s long-standing friendship with Janeway. And cut him as a Vulcan. Make him a Romulan observer who was aboard (for their initial mission), and now has to integrate into the crew, but whose motivations and choices are often questionable, although he learns morality along the way. Harry Kim and Neelix are out. Instead, I would’ve used Nog (Aron Eisenberg) from Star Trek: Deep Space 9, who now has to embrace his Ferengi instincts to barter with people in the Delta Quadrant for supplies and resources. Atop of being a Starfleet officer, he has to learn to accept who he is.

Janeway and Chakotay can stay, but both are pushed way down the chain of command – Janeway to Lieutenant Commander, Chakotay to equal rank, more general experience, but no real bridge qualification. When the Voyager is shunted into the Delta Quadrant, the bridge crew – including the Captain and the First Officer – are killed. Janeway survives because she’s in Astrometics, and is now thrown way out of her depth because she has to take command. The crew are divided about her. Half want to uphold Starfleet principles, the other half feel they should just do whatever’s required to get the Voyager home as quickly as possible. Everybody’s unsure whether Janeway has the capability to command. It doesn’t help that Chakotay feels he should be in charge. Torres also stays, but not as this fledgling engineer, but chief engineer who’s been around, is decorated, and has the respect of the crew. Her support of Janeway validates Janeway’s standing.

Throughout, Janeway’s ideals are tested. But the Voyager is a big ship, and she has a lot of people wanting to get home, so there are times she has to compromise for one reason or another – either to keep the ship functioning, because she finds a possible shortcut, or simply because she recognizes the crew’s coming apart. Voyager (the ship) also experiences wear. Throughout the existing show, Voyager always looks pristine, but the ship would become scarred, run out of resources, and even go through stretches (as in episodes) where systems aren’t working. It’ not like they can just stop at a starbase and get a service, so keeping the ship up and running drives the urgency of their mission.