Reruns of Star Trek: The Original Series captured my imagination when I was just a kid in the 1970s. Space, aliens, adventure – what isn’t there to love? 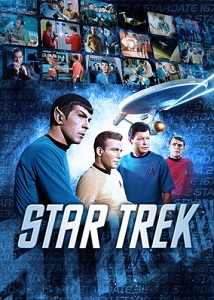 The effects are obviously dated now, but the storytelling was paramount. I had an argument with somebody once about Star Trek: The Original Series versus JJ Abrams’s reboot; what the other person highlighted – as an intended detractor from TOS – was the terrible special effects TOS incorporated. But the storytelling itself holds up. While there’s some stories typical of that era, overall the storytelling is logical, causal, and makes sense within its own universe. Even at its worst, it remains entertaining.

When Star Trek: The Next Generation was touted in the late 1980s, I was dubious. This was pre-internet, and all I had to go on were articles in entertainment magazines. Talk about the effects and sets were encouraging, but shots of the cast? Who was this bald old guy they were getting to play the captain? Jean-Luc Picard? What sort of stupid name was that? I was ready to hate – and, admittedly, part of it was motivated by my loyalty to TOS.

I didn’t think TNG’s pilot, ‘Encounter at Farpoint’, was particularly good. A number of the central characters felt as if the writers weren’t sure how to position them. Later episodes introduced the Ferengi as the antagonist, but they came across as comical. But Patrick Stewart as Picard? He commanded every scene, and became the core on which the writers could build and find their way. Stories could be uneven, but even the bad ones showed potential. As time went on, TNG evolved, improved and found its voice. Characters became defined, as did the political landscape. They introduced a fantastic new antagonist in the Borg. 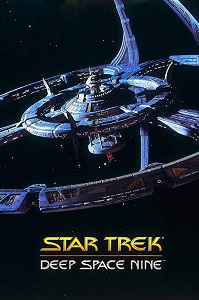 Next came Star Trek: Deep Space 9 – a show that wasn’t essential Trek because it was based on space station and didn’t necessarily involve trekking. Avery Brooks played commanding officer Benjamin Sisko. I already liked Brooks: he’d been in Spenser for Hire – I recall it had been a troubled production, but everybody spoke highly of Brooks. He ended up getting his own short-lived spin-off, A Man Called Hawk. Brooks had presence, and distinguished himself from his predecessors, Picard and Kirk.

The creators and writers of DS9 must’ve learned lots from the teething problems of TNG, because they hit the ground running. The supporting cast were great – Alexander Siddig’s Dr Julian Bashir was the only character they took a while to define (he found his niche as they went on). They reinvented (and validated) the Ferengi, and provided the template for who they became. Best of all, they created a gripping political landscape not only separate from TNG, but which reshaped the Trek universe.

Star Trek: Voyager came next. The premise was terrible: the Voyager was flung seventy-thousand light years across the galaxy and had to find their way home. Stuff like that happened often enough in TOS and TNG and they always got home before the end of the episode. The crew integrated a band of Maquis (a paramilitary group), which was meant to create friction and conflict with the Starfleet crew. That might’ve been the intent, but it didn’t last very long.

Most of the cast felt derivative or bland. Captain Kathryn Janeway was an uneven commanding offer – even Kate Mulgrew (who portrayed her) acknowledged that. To her credit, she was excellent as Trek’s first (on-screen) female commanding offer – it’s just a shame they didn’t write her a better character. Robert Picardo was compelling as the doctor, Jeri Ryan brilliant as Seven, and Robert Beltran underused as Chakotay. The rest could’ve been those peripheral crew members you see in Trek who are handed a line every fifth episode.

The political landscape never worked. The initial antagonists, the Kazon, were Klingons Lite. As Voyager was moving in a straight line, they passed through various territories, but they never found a worthwhile nemesis. The writers had to (re)introduce the Borg to try create some tension, only to unwittingly depreciate them given how easily the Voyager crew handled them every encounter. Their flirtation with time travel was overused, and their reliance on technobabble was infuriating. When you can just make up anything to justify a solution, how can you ever create and maintain tension? Robert Beltran also complained that when Seven (Jeri Ryan) came on board, it made the rest of the characters redundant, because if Janeway ever needed to know anything all she had to do was consult Seven’s repository of Borg knowledge.

I think Voyager has like two great episodes, and the rest is just meh. The show never realised it’s potential. While the Voyager was meant to be ‘lost’, it always felt like they were out exploring just as would’ve happened in TOS or TNG. Despite being so far from home, the ship didn’t show signs of wear, on-board ship operations and crew infrastructure remained pristine, and regulations and morality were rarely compromised. You would’ve thought all these would’ve been progressively tested the longer Voyager was cut off. 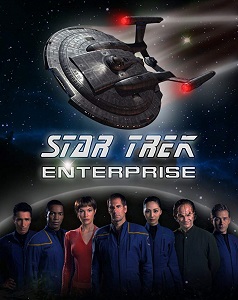 Finally, as far as this era went, there was Star Trek: Enterprise. They did a good job with the crew and setting up the initial premise of just beginning to explore space, but they screwed around with the canon, which always annoys me. Why name the ship Enterprise (outside of obvious marquee appeal)? It’s never been mentioned in any of the other series. How do they have a Vulcan on board, when Spock was meant to be the first Vulcan to enlist in Starfleet? (I understand the workarounds they employed, but found them cheap.)

Enterprise wasn’t bad, but it (and Voyager) did feel complacent, as if the writers were so mired in producing Trek that they were now just taking everything for granted and storytelling had become the product of some bland assembly line. I do recall reading an interview where one of the actors said after he got the role, a producer asked him, ‘What’re you doing for the next seven years?’ TNG, DS9, and Voyager had all gone seven seasons – while the comment might’ve been intended flippantly, I found it arrogant and presumptuous. You earn season renewals by producing quality television, grabbing viewers, and producing ratings – not because you expect the fanbase will sustain you regardless.

As the series went on, Enterprise started to develop its own identity. It never found itself the way TNG and DS9 did, but was belatedly heading in the right direction when it was cancelled after the fourth season, despite solid ratings. (Part of the scuttlebutt of why it was cancelled is execs felt it diluted the appeal to Star Trek, which they wanted to be the demesne of the movies.)

All these shows felt like Star Trek. Even when events were at their worst and characters were pushed to extremes, they still had that typical Trek moral underpinning. Humanity had grown up. That didn’t mean they were perfect, but they held to an ideology that the stories weren’t just about a physical journey and material circumstances, but emotional, intellectual and spiritual ones also. Humanity wanted to be better than it was yesterday.

And then JJ came along and kicked that out the door.

The Next Work: Part II