Welcome to the Land of Dumb. 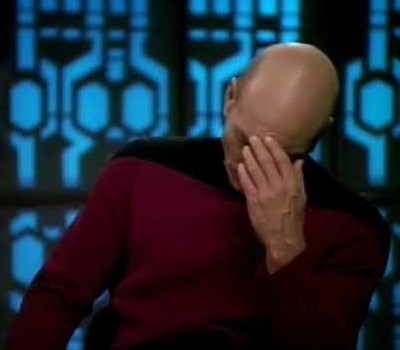 Nobody wants to admit they were fooled into enjoying the Land of Dumb.

Just a quick note: I’ve drawn a lot of examples from the same properties, but that’s just because they’re freshest in my mind. These things do occur regularly.

1. It lazily ignores or rewrites existing and well-entrenched canon.

If you’re taking up a property, you need to accept the history that’s been established. The moment it’s invalidated, it invalidates the existing story also.

Why invest in something that has no respect for its own canon?

Examples: the new Star Wars Trilogy, and, most egregiously, Star Trek: Discovery (2017 – ), which takes place before Star Trek: The Original Series (1966 – 1969), yet introduces holographic communication, instantaneous hyperspace jumps, repair drones, and that Spock has a half-sister he never mentioned in three seasons of TOS, six movies, two Star Trek: The Next Generation (1987 – 1994) appearances, Star Trek (2009) and Star Trek Into Darkness (2013). But I guess oversights happen, hey?

2. It flippantly reinvents and/or invents technology and/or abilities to push its own story.

When you have a future-based property, obviously new technology may be invented. But it still needs to be consistent within the parameters of its own science. This also becomes annoying when it generates a magical solution to a problem because applied retrospectively, this technology or ability could’ve solved so many problems in previous stories.

The biggest issue with magic solutions is they’re magic. It’s very easy to unleash them without bounds. Applying them selectively just exposes how ridiculous it is that they’re used selectively.

It’s much better to think inventively of a way to solve a problem or navigate an obstacle than just provide a magical solution to do it.

Examples: the Force-teleport and Force-heal in Star Wars: The Rise of Skywalker (2019). Think about how many times these abilities might’ve helped characters in situations previously.

The Force-skype in Star Wars: The Last Jedi (2017) helps develop a relationship between characters who would otherwise have no interaction. While there has always been a fleeting telepathy in the Star Wars universe, the Force-skype allowed characters to physically interact. Bizarrely, Snoke orchestrates this in The Last Jedi, but Rey and Kylo continue to do it in The Rise of Skywalker without him. And Luke doesn’t bother to try it in The Last Jedi, but instead projects himself holographically (another new ability) across light years, then overdoses on the Force and dies. Now that the Force-skype exists, why not appear behind an enemy, lop their head off, and then disappear?

A Close Relative: Technobabble is used to sound impressive and/or to rationalise why something works or exists, e.g. ‘Fractal neuronic cloning’ in Star Trek: Picard (2020 – ) to explain why you can clone an android from a positronic neuron. But it’s just gobbledygook.

3. Characters we revisit are in a much worse place than when we left them.

It feels like this is often happening because creators want to move away from collective expectation that these characters lived happily ever after. But it just means they’re all setting up the same journey: redemption. This is a cheat. The tension this story creates is getting the audience to root for the character to become who the audience expected, or who the character was prior.

Characters should undertake a journey that moves them forward. If you look at something like Star Trek II: The Wrath of Khan (1982), James Kirk (William Shatner) has to deal with growing older and learning to accept who he is. In Star Trek VI: The Undiscovered Country (1991), he has to deal with a changing political landscape that threatens to leave him behind. In both situations, Kirk has to move forward and grow, rather than just become the same impulsive, idealistic, headstrong person he had been.

Examples: Luke Skywalker (Mark Hamill) in The Last Jedi. He doesn’t have to move forward and grow. He actually just has to become who he was, or who we expected him to be. In Star Trek: Picard, Jean-Luc Picard is a miserable old bastard who’s just been lounging around, waiting to die also. We want to see the bold, philosophical adventurer.

4. The premise it establishes will look astonishing upon first inspection, but unravel spectacularly if truly examined.

World building is paramount. But it needs to make sense. We need to believe that these particular circumstances could’ve occurred. Too many world-builders just throw a bunch of shit together and, yay, how awesome does it sound? And it is, if you don’t think about it. But some of us do. We don’t want to, but our bullshit metre has been triggered. And once we start thinking, it exposes the absurdity of the world-building.

Examples: the First Order in Star Wars: The Force Awakens (2015). So, since Star Wars: Return of the Jedi (1983), the remnants of the Empire regrouped; built the Starkiller base; replenished the fleet; over at least two decades kidnapped tens of thousands of children and brainwashed, programmed, and trained them to become Stormtroopers; and they did this when the New Republic is in power. And, to top it off, the New Republic didn’t believe a genuine threat existed.

The Force Awakens simply apes the political landscape from Star Wars: A New Hope (1977), but given we have the Original Trilogy sitting before it, it’s impossible to believe that such a landscape could just be. We need explanations. Naturally, we don’t get them.

In The Rise of Skywalker, somehow the Emperor has overseen the construction of five hundred or more Star Destroyers under the ice of Exogol. Who built these ships? Who staffs them? Where did that staff come from? Where did they get their training? How does anybody buy into this shit? (And this is overlooking all the questions about the Emperor still being alive.)

In Jurassic World (2015), people have grown bored of the dinosaur zoo. How? How does this happen? Common zoos are frequently visited. There are always new kids wanting to see the animals. Nobody gets bored of them. So how does the world get bored of something as spectacular as a dinosaur zoo?

5. Coincidences drive the story from Point A to Point B.

Example: In Star Trek (2009), James Kirk (Chris Pine) is marooned on an ice moon, is chased by a snow monster, and ducks into the one cave that contains Spock Prime (Leonard Nimoy). Wow. What are the odds?

In The Rise of Skywalker, the characters land on some quicksand, fall through it, and drop into a cavern. Partly buried under some sand right by them is the exact Sith dagger they had been looking for.

In The Force Awakens, Rey (Daisy Ridley) just happens to run into BB8. Finn (John Boyega) helps Poe (Oscar Isaac) escape, their ship crash-lands, and when Finn walks to the nearest village, he just happens to run into Rey, who has BB8 in her possession. They’re pursued, and the Millennium Falcon just happens to be there. They flee into space and just happen to bump into Han Solo (Harrison Ford) and Chewbacca (Peter Mayhew/Joonas Suotamo). Was a single one of these events justified? Nope. It’s just one coincidence after the other.

6. There’s no sign of pacing; characters just move from one location to where the story needs them next.

A character will traverse great distances because the story needs them somewhere else, even though it should’ve been physically impossible for them to make that journey in the time allotted, and/or the circumstances being what they are.

During the height of the battle, Rey arrives on Snoke’s ship. Kylo murders Snoke, they kill Snoke’s guards, then Kylo and Rey fight. Rey them somehow gets off the ship and back onto the Millennium Falcon. Let’s not forget that at this point, the First Order are looking for smaller craft. (It’s amazing how many times during this tense pursuit that small craft are able to do as they please.)

In actual fact, The Last Jedi is littered with moments like these. Track where characters are, and then where they are in the next scene. Sometimes, how they got from Point A to Point B is obvious. But here, there are lots of holes where they couldn’t have logically moved from one place to the next.

Stories now come with bigger threats than they’re predecessors. It’s all part of upping the stakes. Surely something bigger and more dangerous means that our characters are in more danger, right?

Examples: In Star Wars: The Rise of Skywalker, the Star Destroyers have ‘Death Star cannons’. In Jurassic World, the dinosaur is genetically engineered. A normal dinosaur isn’t bad enough anymore. It has to be a genetically engineered dinosaur. And they engineered it so it can camouflage itself. Why? As a predator, that’s a great characteristic to have. As a sight-seeing object it’s ridiculous. So people come to the zoo to see the dinosaur but can’t because it’s camouflaged?

Even if you’re dealing with superheroes, you have to believe whatever’s happening is possible. Once it becomes video game’esque, how can you remain invested?

Examples: In Black Panther (2018) during the car chase scene, Ulysses Klaue (Andy Serkis) shoots a pursuing car with some sort of energy weapon. The car explodes. Okoye (Danai Gurira) is standing on top of the car. The explosion propels her through the air. She flips, grabs her spear, impales a panel from the car, lands on the panel, and skis across the road. Nakita (Lupita Nyong’o) had been driving the car; she slides up in just the driver’s seat, still holding the steering wheel. I understand this is comic-book superhero stuff, but this whole scene totally blows my suspension of disbelief because it’s so insanely farfetched that it’s impossible to believe two mortals could survive such an event and behave in this way.

Something similar is Legolas (Orlando Bloom) barrel-jumping in The Hobbit: The Desolation of Smaug (2013). I understand the Elves are meant to be graceful and have abilities beyond everybody else, but what happens here is so ridiculous that it transcends any genuine characterisation and elevates into absurdity.

9. There will be extremely obvious solutions characters ignore, because if the characters undertook them the story would end.

So many stories now make improbable decisions to lead them to the next set piece. That’s more important than them pursuing a perfectly logical decision which would’ve undermined the story continuing.

Example: In The Last Jedi, why doesn’t Admiral Holdo explain her plan to her crew? What is her reason for keeping it from everybody? While some might defend her right to not explain herself to subordinates, it’s her reticence which causes everything that follows. This could’ve all been avoided with a conversation.

10. Something mysterious will occur, and no explanation will be provided as to how or why it happened.

It’s like the creator has decided to rely on the intrigue as a hook, and then to bait and switch the audience with another mystery to divert from the fact they’re not going to explain the previous one.

Example: In The Force Awakens, how did Maz Kanata (Lupita Nyong’o) get Luke Skywalker’s lightsabre?

Why People Don’t Recognise the Land of Dumb

Here are the three reasons people don’t cite these issues, and/or defend a stupid property:

Once upon a time, genuine thought went into storytelling. The trend now is for style over substance, which has resulted in lazy storytelling, preposterous plotting, and mindless drivel.

Check your brain in at the door and enjoy your stay in the Land of Dumb. Don’t question how the story unfolds, why it unfolds as it does, or the improbability of the story that it’s telling.

Just sit back and enjoy the dumbening.