One of my early loves used to be pro-wrestling. People might roll their eyes. Wrestling isn’t a sport! might be the complaint. 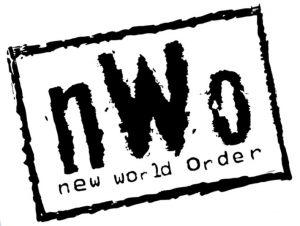 It doesn’t even pretend to be anymore. It’s entertainment – no different than watching an action movie or television show. The plotting is scripted to culminate in a staged battle. We know movies and television shows are fiction, but we still invest in them, we still care for or loathe characters. Pro-wrestling is the same.

The great wrestlers also told stories inside the ring through their bouts. It’s a lot like the fights in the Rocky movie series. If you only watched the boxing matches, you would immediately be able to interpret the circumstances of the story and how and why the bouts unfold as they do. That’s what great pro-wrestling bouts did.

Recently, a friend invited me to join an nWo group on Facebook. The nWo – the new World order – featured in World Championship Wrestling (WCW) from the mid-1990s to the early-2000s, and for almost two years helped WCW trounce World Wrestling Entertainment (WWE), which was the bastion of pro-wrestling at the time.

Over the years, a lot of people – from fans to experts to participants (such as Hulk Hogan) – have postulated why the nWo floundered after being so hot.

And I’ve never actually agreed with any of it.

Here’s my thoughts on why the nWo worked, why it declined, and how they could’ve possibly kept pushing the angle.

The nWo wasn’t a faction, but an angle.

There have been countless factions in pro-wrestling. Some worked well, e.g. The Four Horsemen, Degeneration-X (D-X), etc. Others have struggled to gain genuine marquee.

But the nWo – at least initially – was an angle where three wrestlers who’d made it big in WWE (Hulk Hogan, Kevin Nash, and Scott Hall) planned to take over WCW.

That conflict generated a cultural clash. WCW loyalists immediately hated the nWo. They were patriotic to WCW.

This was the foundation that the angle was built upon.

This is an important distinction, because too many people look at the nWo as purely a faction.

The nWo got too big.

Even Hulk Hogan has claimed this, but the nWo needed to get big because the driver in the storyline was they were taking over. That meant recruiting. That mean WCW wrestlers had to turn their back on the organisation and join the nWo. That meant the nWo had to grow stronger and stronger. To believe the threat, we had to see they were moving forward and building.

As the nWo swelled in ranks, they went from this small dissident band to a sub-organisation within WCW. You could believe they were taking over.

Fans questioned who would join the nWo next. The swerves kept coming – wrestlers tearing off attire to reveal they wore an nWo t-shirt.

There was a genuine sense that this group was going to achieve its intentions.

At this point, the storyline – the angle – kept developing.

There were some movements towards the nWo trying to accomplish their goal – staging their own PPV, and Eric Bischoff demanding Thunder (WCW’s Thursday night show). The PPV struggled, and then the goal was abandoned.

Once that happened, the angle ended, and what we were left with was the faction at the core of the storyline. Without a goal, the faction stagnated. They kept doing what they had been doing – interrupting matches, starting feuds, etc. – but they had no genuine motivation to do so. Without that motivation, they could’ve been any other heel faction.

They lost what made them special.

This is when the nWo began to putter out. WCW recognised that and tried to split the group into a civil war to regenerate heat.

The idea was good, but the execution was stupid. WCW wrestlers who’d strongly opposed the nWo (e.g. The Giant, Lex Luger, and Sting) now suddenly joined either faction. No explanation was given. It just was (which really epitomises much of WCW’s booking at the time).

In splitting the group, they also split the two founders – Nash and Hall. It would’ve made more sense to keep them together and pit them against Hogan and his stalwarts.

At about this time, Bill Goldberg was becoming a hot commodity. As he worked his way up and won the World Championship, WCW decided to reunite the two nWo factions, and pit them against Goldberg. It wasn’t a bad idea. It wasn’t a good one either. Now we had two groups who’d just been warring inexplicably reconcile.

Whatever the platform of storytelling, there needs to be justifiable motivation as to why things occur. If that doesn’t happen, audience start to disconnect.

And that’s what began to happen with WCW.

This is when the WWE started to reassert their ratings dominance.

New Incarnations of the nWo.

The nWo was rebooted several times from this point: the nWo Elite (with the nWo B-Team), the nWo Black and Silver and then, in WWE, the nWo featuring the original founders (Hogan, Nash, and Hall).

Not one of these incarnations worked.

And the reason goes back to the first point: now the nWo purely became a faction, rather than an angle. The Black and Silver version might’ve been interesting had injuries not derailed storylines, but it wouldn’t have been extraordinary.

Think of it this way: it didn’t matter what these reincarnations were called. If they didn’t have the nWo branding, would it have mattered? No. They could’ve been named anything and it wouldn’t have affected how they functioned. They were just another heel group trying to wreak havoc.

Things That They Could’ve Done Along the Way.

WCW chased quick gratification, e.g. having Bill Goldberg defeat Hulk Hogan in a championship bout on Nitro. That should’ve been built up for a PPV, and then prolonged for as long as possible, just as WWE did in keeping the title off Stone Cold Steve Austin.

Goldberg could’ve been pitted against nWo members and made to work his way through the ranks. A feud with Scott Steiner alone could’ve run at least twelve weeks. Once Goldberg had worked his way up to the top, he could’ve demanded a bout against Hogan at a PPV.

Taking a leaf from WWE’s playbook, they could’ve insisted on a special guest referee: Ric Flair. Flair could’ve officiated the match down the line until Goldberg got the pin. Flair would count two, then give Goldberg the finger. Goldberg would try to accost Flair, but be assaulted from behind by Hogan. Hogan pins Goldberg. Flair makes a super-quick count. Hogan wins.

Flair announces the formation of the nWo Four Horsemen: this is why he’s turned. The nWo continue to get stronger. Flair and company get another push. WCW keep Goldberg chasing the belt and trying to right an injustice. Hogan remains champion.

Now we hate Hogan more, we hate Flair, Goldberg has new enemies (as in the Horseman) and you have storylines for the next sixteen weeks.

Instead, once Goldberg became champion, that was it.

Where It Should’ve Gone.

The nWo needed to achieve what it set out to do: it needed to get bigger, until WCW wrestlers became a minority. The holdouts – such as Sting, Lex Luger, Diamond Dallas Page, Booker T, and Goldberg – would be targeted along the way. Page and Booker T could be taken out with injury storylines to weaken WCW further. You might even turn Goldberg as one final marquee signing. (Goldberg might’ve been promised movie roles as an incentive, but it might turn out he had infiltrated their ranks as a double agent.)

At a PPV such as World War III, they could’ve had a royal rumble where the winner took it all. It would be WCW’s last chance to defeat the nWo and reclaim their company. It would be the nWo’s final assault.

In the bout, the WCW holdouts would be horribly out-numbered. They’d fight valiantly, and even get it down to just three: Sting and Luger versus Hogan. Luger would turn on Sting – one final swerve. Hogan would throw Sting out of the ring.

The nWo wins. WCW becomes nWo. Maybe the nWo even announces one last member – some well-known financier that has backed them from the beginning. You could’ve even gotten somebody like Donald Trump to play this role. But now there’s an internal logic: somebody has wanted to take over WCW from within its own ranks and now, after years of war, they’ve accomplished their goal.

For one or two months, you’d have the nWo running things. They’d be dictatorial, treat WCW stalwarts (such as Sting) appallingly, and even talk about expansion (into WWE and ECW).

At the next PPV, it could be announced that WCW’s president, JJ Dillon, will sign WCW over to nWo mouthpiece Eric Bischoff.

However, Bischoff doesn’t show. He’s found unconscious backstage. Spray-painted on the back of his jacket are three letters: WCW.

Now you simply run the angle in reverse: three WCW guys – Sting, DDP, and Booker – continue to hold out. They do exactly what the nWo did originally: ambush wrestlers, spray-paint their logo, and begin to recruit. Some of the feuds are already entrenched, e.g. Luger turned on Sting, so Sting goes straight after him. Steiner and Goldberg might take on Booker T and DDP, with Goldberg turning back to WCW.

And on and on it goes.

Being the group initially in power, the nWo could seek to screw over the holdouts as much as possible, but the holdouts would progressively gain momentum. As they win more and more ground, infighting erupts within the nWo.

This is when you split them into a civil war, so they start taking one another out. They would not recruit now, because that would undermine WCW’s fightback. You’re likelier to have nWo expelling members – possibly even Hogan. You’d be watching them get weaker and trying to hold onto what they had, which is what every empire does as it falls.

Ultimately, it finishes as it started, with one final battle.

WCW win, and the angle is completed.

Anyway, that’s how I would’ve done it.