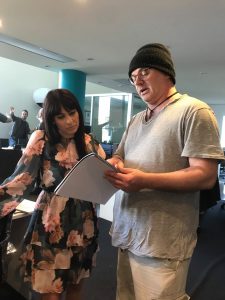 You wouldn’t think that standing around giving actors instructions (when it’s needed), watching actors act, and watching the footage on the camera, would be so exhausting.

It’s something about the creative process, about trying to produce something from your imagination – and whatever wells that invariably draws on.

When I was younger and would have big writing sessions – and I’m talking writing eight or nine hours – I would always end the day feeling two things:

As I got older, I also learned that writing nonstop – day after day after day – could leave me flat, like I was spending so much emotional energy infusing these characters with life (or attempting to) I didn’t leave much for myself.

So I learned to pace myself.

It generally works better, too, because I can digest what I’ve written, compartmentalise it, and assess if it’s working. That’s harder to do when writing big blocks. Everything seems great as it comes out in a feverish rush. It might be for others. But I find it hard to remain focused through marathon writing sessions, so a lot of the latter material I produce can lose its purposefulness.

It’s different filming, because – unlike writing a novel – it’s such an immediate and collaborative process. I can bounce off the crew, or the actors. I can see what the actors are doing and immediately know if I love it, like it, or would prefer to see it done differently. It can be like workshopping.

Stuart also passed on an invaluable piece of advice – he told me I’d write the story three times:

It’s definitely accurate. Seeing scenes I’d written being acted out, I could see what wasn’t working, what needed impromptu revision, and what could be improved. Also, repetition that didn’t leap out on the page certainly leaped out when an actor spoke their lines. Then there’s simple development – things that were shallow on the page gain depth and complexity as they’re acted and actors breathe life and character into the scenes.

That was the case filming Maryanne Niceforo’s scenes. Maryanne plays Helen Katich, a respected actress and stalwart of Australian television. Originally, the character existed (on the page) just to provide a certain perspective. When I wrote the character’s bio, she gained some bones. But it wasn’t until I met Maryanne that Helen gained flesh.

Maryanne belongs to the infamous club I’d like to found – people who spill tea while pouring it from the pot in a café. I thought I was the only one who did this. But it happens regularly – more often than it doesn’t whenever I go to a café. There’s got to be something going on with these pots. (The other complaint is when you get a teapot that provides you about 3.5 teas – who drinks that much tea in one sitting?)

She wasn’t quite how I’d pictured Helen – although I didn’t really know how I’d pictured Helen. But talking to Maryanne, I started working things out. I was toying with a possible twist for the character, but felt like that twist would exist for the sake of existing. However, I did start to see more of Helen because Maryanne kept probing and asking questions that forced me to explore who Helen is.

On Saturday, Maryanne filmed her scenes, finding Helen’s balance between charm, humility, and an underlying pretentiousness that hints at something of a façade. But how much of that façade exists, and what it protects – insecurities, vulnerabilities and/or secrets – is up for speculation.

In one pivotal scene, Maryanne improvised in a way that had us reshoot the scene, but as the improvisation sat in my head and tumbled around in my mind, I decided it worked better than anything I’d planned. It’s exactly as Stuart said: the story was being rewritten (for the better) as we filmed.

Maryanne is a fireball – bright and energetic, and nice enough to laugh at my jokes (although everybody should, really). She’s put a lot of work into becoming an actor, including recently returning from a workshop in LA., so she’s been an awesome addition who’s helped develope a peripheral character into somebody (who’ll become) much more integral.