Where does The Rise of Skywalker go? 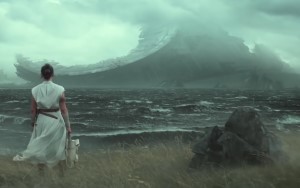 Given the New Trilogy’s slipshod construction, what can they offer us?

A good friend, Tom, suggested the use of ‘Skywalker’ in the title will reference what the protagonists (I refuse to label them ‘our heroes’) call their new resistance. Because, yay, that’s so cool. Tom’s probably right. (If only you could use your power for good!)

Possibly, Luke Skywalker (Mark Hamill) wasn’t intended to be in this film, but given Carrie Fisher’s untimely passing, the filmmakers need some anchor to the Original Trilogy. We hear Luke’s narration in the teaser. We see Leia (Carrie Fisher) hug Rey (Daisy Ridley), which could be the hug they share in The Force Awakens reused and reimagined. We see Lando Calrissian (Billy Dee Williams) return. All these would seem lines cast to catch a fanbase that’s growing increasingly disassociated.

And let’s explore that for a moment: few rave about the Prequels as being great movies – although (and this is not being facetious), I know a number of people who have now said the Prequels have appreciated considerably in light of what’s been done in the New Trilogy.

In an interview following the sale of Lucasfilm to Disney, George Lucas said he always tried to do something new in each movie – new aliens, new worlds, etc. If you look at the Prequels filtered through that information, you’ll concede he’s right. He said he’d written outlines for the new trilogy (featuring teenage protagonists), but at his age he didn’t feel he wanted to commit to ten years of moviemaking, so he sold Lucasfilm. He offered the stories to Disney, but he said that they were more interested in making a ‘retro’ film.

You can do that well enough, but the biggest problem is The Force Awakens (2015) shits on the Original Trilogy’s characters and premises. It plays out like one of those reunion telemovies they do years after a sitcom ends where all the characters have aged, they’re now living lives you would’ve never possibly imagined for them, then the same beats are rehashed. And the result? We tarnish a legacy.

There is no overarching vision for the New Trilogy. Scuttlebutt suggests that JJ had an arc, that he’d written Episode VII and Episode VIII, but Rian Johnson ditched JJ’s draft and wrote his own version before The Force Awakens was completed. I don’t know what’s more objectionable: that they had no plan, or they had a plan that they abandoned. Either isn’t good. Disney should be embarrassed by their handling of the franchise. Somebody needed to oversee all three films, to keep the storytelling consistent and ensure that they worked toward an ultimate goal, as George Lucas did with the Original Trilogy, and Kevin Feige does for the Marvel universe.

While fans defended The Force Awakens, much of that fervor has simmered for The Last Jedi (2017). Many who espoused The Force Awakens as brilliant have fallen quiet. Obi Wan’s words in A New Hope are prophetic: ‘I felt a great disturbance in the Force, as if millions of voices suddenly cried out in terror and were suddenly silenced. I fear something terrible has happened.’ The something terrible is the handling of this franchise. The Last Jedi was the epoch. Solo: A Star Wars Story isn’t a great movie, but about as good as Disney has gotten in this galaxy, and it suffered the flow-on from fans’ disillusionment with The Last Jedi.

Disney have now conceded that following Episode IX, the movies will be on temporary hiatus and they’ll be focusing on TV – substantiation the movies have not fared well. A lame defense is that Disney saturated the market. Well, Marvel release many more movies in their universe than Disney does in their Star Wars universe, and they’re doing well. If people uninvested in Star Wars, it’s because Disney saturated the market with mediocre movies. Compare this to the progression of other serials: Police Academy, Lethal Weapon, the original Superman series, the original Batman series, even the Bourne series, etc. As each movie was less critically and commercially successful than its predecessor, interest waned, and those serials inevitably ended. The same thing has happened with Disney’s Star Wars. Television is a strategic retreat. Hopefully, unlike Star Trek has done with Star Trek: Discovery, they don’t focus on mediocre television.

This shift means that they have no faith in Episode IX to rouse and reinvigorate the fanbase. And why should they expect that? Where can this story ago? Already, rumblings are suggesting that JJ Abrams will be undoing a lot of the storytelling that Rian Johnson did.

A good example is Kylo’s helmet. In The Force Awakens, Kylo wore a helmet as something of an homage to Darth Vader. In The Last Jedi, Kylo smashes it, as if he’s done with juvenile idolization. In the trailer for The Rise of Skywalker, we see Kylo fixing the helmet.

This helmet has become a metaphor for this series: in The Force Awakens, it’s a tacky homage to a superior series; in The Last Jedi, it’s smashing the integrity of this galaxy; in The Rise of Skywalker, it’s about damage control and trying to fix what’s been broken, not realising what was broken wasn’t very good to begin with. They should call Episode IX Damage Control. My only hope now is that the first Star Wars television series Disney release is about the helmet and it’s journey through this galaxy.

FFS, it’s a helmet. Removing the practical truth that, surely, in an age of spaceships and blasters and Death Stars and lightsabers that you could just make another helmet from scratch (just as Luke made a new lightsaber), seriously, the depth of this character’s menace is he wants to wear a helmet just like Darth Vader? What is he? Seven years of age?

And that actually could’ve been an interesting story – a child with prodigious Force abilities that corrupt him before he has the maturity to handle them. Why not? We’ve had evil children with sensational powers in movies before. But that’s not who Kylo is. After watching two movies, my impression is that nobody knows who or what Kylo is meant to be, or what he wants, outside of this initial idolization that is never fully explored.

It’s like the writers must’ve sat around a table and said stuff like, ‘Imagine Han and Leia’s child was bad’, and ‘Imagine he had to kill Han!’, and, ‘Imagine he idolised Darth Vader, and wore a helmet like him’, and that was the depth of their character development. Nobody went beyond that. They just got so excited by those handful of suggestions (most of which should’ve been dismissed) that they built a whole trilogy around them.

One of the best scenes in films is when Detective Prendergast (Robert Duvall) corners D-Fens (Michael Douglas) on a pier in Falling Down (1993). D-Fens – some sort of disenfranchised weapons engineer  – has wreaked a trail of destruction through the city. Now, as Prendergast holds a gun on him, D-Fens asks, ‘I’m the bad guy?’ He doesn’t know he’s bad. He was fulfilling his own objectives on a quest he thought was just and righteous. That’s what makes him compelling. That’s what makes him tragic.

George Lucas’s Prequels aren’t great, but that’s something he strove for with Vader – he didn’t see himself as evil, but making choices for the betterment of the Republic and his relationship with Padme (Natalie Portman). Obi Wan (Ewan McGregor) has to point out to him how far he’s fallen in Revenge of the Sith, and still Anakin can’t see it. He thinks he’s made the right choices, and paranoia has poisoned his rationality. (Shit, these Prequels sound so fucking good now.)

So, as far as The Rise of Skywalker goes, Kylo will pursue Rey; the Emperor will appear to take command; Force-ghost Luke will direct Rey somewhere; the Emperor will be about to kill Rey, and Kylo will save her but die in the process, and he’ll be redeemed; and blah. That’s about as interesting as you can make it from the pieces they’ve given us.

If I was to try salvage the mess, I would go so far left field to surprise everybody. Rey, Poe, and Finn would learn that the First Order has a new super-weapon. Luke wouldn’t have died; he would’ve translocated himself through Force ability; the Emperor would be infused in Hux, and step out of him, ready to unleash the new super-weapon; Luke would lead Rey and the others to a secret location; there’d be a warehouse, and once they opened it they’d find it full of clone Reys.

That’s who she is: a female clone of Luke, created from the hand he lost in Cloud City. And there’d be thousands of them, all Force capable, all inherent with Luke’s skills to that time (muscle memory, Force memory – explaining her abilities, and why Luke’s lightsaber called to her), ready to march out and take control of the galaxy. Our Rey would just be a test Rey they let out, to see how she would fare. Kylo told her she’s nobody. He’s right. She’s just a clone. (This is also why the First Order hadn’t reverted to a clone army – that tech was being used elsewhere.)

Rey would sacrifice herself to take out all the Reys, while Luke somehow banished the Emperor. The First Order collapses. For now, things are the way they should be. For now.

It’s not much, but there’s not much to work with. Whereas moving into The Return of the Jedi there was this great anticipation that this breathtaking saga was coming to some sort of momentous conclusion, the New Trilogy feels like it’s just puttering out – being finished because that’s simply what needs to be done, and just make sure it’s done in the most inoffensive manner possible, because The Last Jedi has already pissed off enough people.

Even the Prequels had much better momentum than that.

Next Week: How I Would’ve Done the New Trilogy.

Good Questions for Another Time

Song of the Curlew