Writer/director Sylvester Stallone was faced with an interesting challenge when the time came to continue the story of his loveable underdog Rocky Balboa in Rocky III (1982). 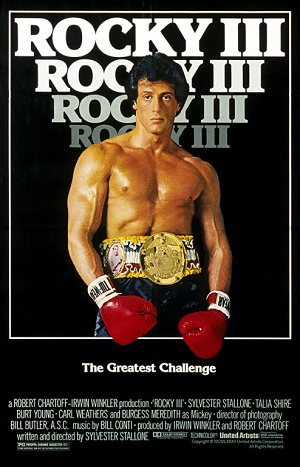 In Rocky (1976), Rocky Balboa is a journeyman boxer who’s squandered his talent and is given a once-in-a-million shot against heavyweight champion Apollo Creed (Carl Weathers). The championship fight becomes less about the title and more about Rocky earning respect (and self-respect) and proving that, for the first time in his life, he matters.

Rocky II (1979) is the obligatory sequel to a successful movie. Given Rocky had lost the first bout against Apollo, a rematch beckoned. It would’ve been a brave filmmaker who made Rocky lose a second time, so the win is a given. But Stallone takes us on a compelling journey as Rocky tries to fit into civilian life, marries Adrian (Talia Shire), struggles financially, and then deals with the issues surrounding the birth of his son.

His win in the title fight is thrilling. I don’t know if two boxers have ever both hit the canvas and had the referee apply a ten count to them. I haven’t seen it. But it adds a twist that nobody expects. Rocky becomes the champion. We cheer. That could be any one of us succeeding at something improbable in our lives. That’s the beauty of storytelling – how we relate to characters and their journey.

Rocky is not only a great sports movie, but a brilliant movie in general, and retains a timeless quality. Rocky II is a worthy sequel.

So where to for Rocky from there?

In real life, promoters probably would’ve organised another rematch, billing it as the decider given both Rocky and Apollo sit at one victory apiece. It doesn’t happen. Apollo slips into retirement. We’re left to extrapolate that he took such a beating in both his bouts against Rocky that it was the smart time to get out. Back then, boxers did retire in their 30s. Nowadays, they seem to always be coming back, regardless of age.

Rocky III introduces us to Rocky now that he’s been on top. He’s had ten title defences. Success, wealth, and domesticity has softened him. He no longer has the same hunger and relentlessness. Meanwhile, climbing up the ranks is a young, hungry, angry, powerful challenger, Clubber Lang (Mr. T). Credit again to Stallone, who builds a fearsome opponent who’s not just a clone of Apollo.

But here the problems begin to creep in.

At a ceremony where Philadelphia honours Rocky by unveiling a statue of him, Rocky announces that he’s considering retiring.

Clubber emerges from the crowd and challenges him, propositioning Adrian to anger Rocky and get him to accept the challenge. Rocky’s manager, Mickey (Burgess Meredith), declines the challenge and leaves.

Back at Rocky’s house, Mickey confesses that Rocky’s opponents were “hand-picked”, saying they chose challengers who were good fighters, but weren’t the “wrecking machine” that Clubber is. Mickey explains that the beatings Apollo gave Rocky should’ve killed him, and that he’s grown domesticated and lost his edge. As a result, Mickey took it upon himself to protect Rocky.

My problem here is that in the opening montage, we see snippets from Rocky’s title defences. Physically, he looks great. He knocks out each challenger – some with huge punches. Throw in his later battle against wrestler Thunderlips (Hulk Hogan) who manhandles Rocky – until Rocky grows angry, removes his gloves, and beats up Thunderlips.

Going back to the opening montage, Rocky’s time at the top mirrors Clubber’s rise. Clubber is powerful and destructive. He obliterates his opponents. But Rocky’s doing the same thing.

While the bout against Thunderlips is meant to be a lark, it turns real, and Rocky shows his fire against a bigger, stronger opponent.

From this limited evidence, it’s hard to reconcile that Rocky’s lost his edge. He looks better than ever.

It might’ve been more instructive in the montage if we saw a Rocky who was a little out of shape and struggling.

It would’ve then been easier to accept that he’d lost it.

On the way to the ring during their title bout, Rocky and Clubber intersect. Clubber shoves Mickey. Mickey has a heart attack. He’s rushed to the change room and a doctor is called. Rocky wants to call the fight off. Mickey berates him and says he has to stand up for himself. Rocky goes out to take on Clubber.

Despite a bright start, a distracted Rocky struggles. Clubber annihilates him in two rounds.

Rocky obviously couldn’t win, because we’re only halfway through the movie. Once he wins, it’s over. It’s the equivalent of, And they lived happily ever after …

So Rocky can only lose. But this can only mean there’ll be a rematch he’ll win.

It’s a condensed rehash of the first two movies that robs the story of its dramatic impetus.

As a sidenote, Clubber shoves Mickey, who then has his heart attack. I would suggest that Clubber’s culpable here, but nothing’s done with the incident.

The Loss of Confidence

A nice message that’s lost throughout the story is what happens when you get to the top?

There are plenty of examples of boxers, other athletes, and sports teams who lose their hunger once they’ve reached whatever’s their sporting pinnacle.

After Mickey dies, Rocky struggles with self-doubt. Apollo tries to train him for a rematch – given the events of Rocky IV (1985), you would’ve thought that Apollo would’ve decided to challenge Clubber himself. (As an aside, Weathers is actually two years younger than Stallone.)

Throughout training, Rocky suffers traumatic flashbacks of the bout against Clubber, and trains ambivalently. Apollo grows disgusted and gives up.

Adrian challenges Rocky on the beach with his interpretation of what happened. He’s afraid of losing everything they’ve built in their lives. They thrash it out. Rocky reconciles the truth and is ready to take on Clubber.

It’s a nice little arc, but “little” is the operative word.

Rocky didn’t struggle with this self-worth when he decided to take Clubber on in the first bout.

It feels as if what should’ve happened is that Rocky tried to beat Clubber, but was just out-matched. As the bout went on, Rocky should’ve begun to experience the doubt. We see snippets of this when Rocky tells his makeshift trainer, Pauly (Burt Young), that Clubber’s too strong, but the message is lost in his concern for Mickey. Is Clubber too strong because he’s simply too strong? Or is he too strong because Rocky’s mind is elsewhere, he can’t mount a defense, and as a result everything is overwhelming him?

That mixed message dilutes what’s meant to be going on – that, psychologically, boxing has gone past Rocky, and Clubber is too strong, too hungry, and too dangerous.

This leads to the next issue.

Weathers is great as Apollo, and this is his favourite movie as the story humanises Apollo.

But what’s the point?

Apollo volunteers to train Rocky. Rocky initially accepts without much thought behind the decision. This doesn’t address Rocky’s issues with self-worth, and contradicts the other subplot: that Mickey took care of Rocky to the extent that Rocky surrendered ownership of his life and career because it was easier for somebody else to do the thinking.

Apollo talks about the “Eye of the Tiger” as a metaphor for hunger and killer instinct, but that’s as motivational as he gets.

If there was going to be a conversation about self-worth, it seems that Apollo should’ve been the one to have it with Rocky. This would’ve presented another opportunity to explore who Apollo Creed is. After all, we know nothing about his past. Where did he come from? How did he become a boxer? He is handed to us as absolute in Rocky. Sure, we see where he trained here, but that’s it.

You’d infer that Apollo probably had his own struggles and recounting them could’ve helped Rocky here, but Adrian becomes the pop psychologist.

That’s great, because that’s her role – she’s the rudder for Rocky. He is clueless without her. She’s always the one who orients him and is the true compass in the family. Her role in the franchise is under-valued. Without her, Rocky would still be a bum and loanshark enforcer walking the streets.

But Apollo coming on as Rocky’s trainer and manager enforces that issue that Rocky takes no ownership of his own fate, and ignores the most important part of Rocky’s battle – the mental one. Surely a big part of training and managing is motivation and addressing the subject’s mindset.

Instead, Apollo trains Rocky to be a Mini-Apollo.

In the first round, Rocky dances, jabs and dominates Clubber.

The second round opens similarly. But then Clubber gets in an offensive and the momentum swings. He knocks Rocky down.

But now Rocky has two realisations:

The two get into a heated altercation at the end of the round, but the exchange is nonsensical. Clubber tells Rocky he’s crazy. Rocky says, “At least I’m not breathing heavy.”

This is a line for the audience to recognise Clubber’s lack of endurance, but is it what you’d say to somebody who called you crazy?

When Rocky returns to his corner, Apollo berates him for standing there and taking Clubber’s best punches, rather than trying to evade them.

Rocky says he knows what he’s doing – he’s come up with his own strategy.

Through the third round, Rocky baits Clubber. This round mirrors the Muhammad Ali-George Foreman bout, where Ali baited the younger, stronger Foreman into throwing big punches until Foreman had exhausted himself.

Rocky’s strategy is meant to show us that he’s overcome his fear and taking ownership of his life and career. Yay.

But why? Apollo’s strategy that Rocky box as Mini-Apollo was working.

You could argue that Rocky abandoned it because he does take that ownership, but then that makes Apollo redundant. All he did was build a clone who outgrew him within the space of two rounds.

While an argument could be made that Apollo (physically) trained him, Rocky and Rocky II show us that Rocky does train himself to a large extent.

If Rocky was just going to rope-a-dope with Clubber, was Apollo needed at all?

Also, Rocky’s strategy falls back to what he used in Rocky and Rocky II and Rocky IV – stand front-on, get punched in the head a lot, and then out-punch his opponent.

A Tale of Two Stories

This feels as if it should be two separate stories:

It’s fine to try the mash-up, but in the end each story works against the other, which makes their message redundant.

The Marriage of Both Stories

For it to have intertwined both stories, it feels as if once Mickey had his heart attack, Rocky should’ve forfeited the title bout against Clubber. Clubber then could’ve become champion and reigned supreme, although the question mark would always hang over his championship given he never won it from Rocky.

Rocky struggles to adjust to life post-boxing, but what Mickey told him (about being shielded) nags at him to the extent that dissonance creeps into Rocky’s life. This is where Adrian’s speech comes in to rouse him to action.

He seeks out Apollo, saying he needs somebody to train him. Apollo says while Rocky’s strengths are his power and his hard head, his weakness is his predictability. Rocky suggests Apollo teach him his style. Apollo says Rocky doesn’t have the tools – and, honestly, he doesn’t. Apollo has speed, grace, and height/reach. His style will never work for Rocky. Apollo suggests what Rocky needs to learn is how to adapt in the ring.

Rocky struggles initially, but slowly learns to think for himself. When he fights Clubber, he uses the rope-a-dope and wins.

Rocky III is a glitzy, action-packed, sports movie powered by great performance from the charismatic leads and fuelled by Survivor’s number one song “Eye of the Tiger”.

It’s beautifully made, fast-paced, and there’s always something happening.

A Look Back: Star Trek VI - The Undiscovered Country

A Look Back: Superman Returns