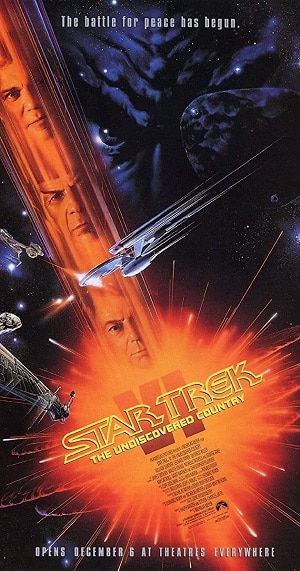 But Star Trek II: The Wrath of Khan (1982) is still considered unparalled for Trek and science-fiction movies, and Star Trek IV: The Voyage Home (1986) was the biggest grossing Trek movie to that time.

So what did the sixth installment have in store? And would it be a fitting swansong for the aging crew?

Nicholas Meyer – who’d written and directed The Wrath of Khan, reinvigorating the franchise; and who’d written the 1987 portion of  The Voyage Home – was back.

Star Trek had often mirrored contemporary issues and events, and Star Trek VI: The Undiscovered Country (1991) would be no different.

Meyer and Leonard Nimoy came up with a story that reflected Chernobyl, the collapse of the Soviet Empire, and the end of the Cold War.

The story also plays into Star Trek: The Next Generation‘s (1987 – 1994) universe.  In Star Trek: The Original Series’s (1966) the Klingons are antagonists. In TNG they are allies.

Through The Undiscovered Country, we get see a building block in how that happens.

TNG also has a two-parter, “Unification I” (season 5, episode 7), and “Unification II“(episode 8), which involves Spock and loosely references The Undiscovered Country.

And, lastly, Michael Dorn, who played Worf in TNG and Star Trek: Deep Space Nine (1993 – 1999), made a cameo as a Klingon Defense Attorney, Colonel Worf.

So as much as this was a sign-off for The Original Series crew, it was also a bridge into The Next Generation, who would pick up the cinematic mantle.

The Klingons key energy facility, the moon Praxis, explodes, which makes it impossible for their empire to maintain their military budget, as well as continuing hostilities with Starfleet.

Spock (Nimoy) volunteers Captain Kirk (William Shatner) and the Enterprise to meet the Klingon batter cruiser, Kronos One, bearing the Klingon Chancellor, Gorkon (David Warner), to Earth to negotiate for peace. Kirk is against the mission. The Klingons killed his son, David (Merritt Butrick), and consider Kirk their mortal enemy. But he has no choice but to follow the orders.

Following a state dinner on the Enterprise with Gorkon and his staff, the Enterprise seemingly fires on Kronos One, knocking out its artificial gravity. Two Starfleet crewman board the ship and mortally wound Gorkon.

Kirk and Bones (DeForest Kelley) board the ship to help, but Gorkon dies. They’re held responsible, put on trial, and found guilty. They are sentenced to life imprisonment on the Klingon ice asteroid Rura Penthe.

Spock and the rest of the Enterprise crew work out there’s a conspiracy involved. They rescue Kirk and Bones, uncover the conspiracy – which involves Klingons, the Romulans, and the Federation – and speed to the peace talks, which have been moved to a neutral site on Khitomer.

Kirk saves the new chancellor, Gorkon’s daughter Azetbur (Rosanna DeSoto), and makes a speech about letting go of prejudices and moving into the future.

The crew return to the Enterprise to find they’re about to be de-commissioned.

The face of the conspiracy is an urbane Klingon versed in Shakespeare, Generald Chang (Christopher Plummer).

Plummer – as always – is great. The problem is he’s not overly developed.

Khan (Ricardo Montalban) in TWOK had a succession of scenes where he tormented beloved crew, bantered with Kirk, and manipulated murder and mayhem. The death of his wife and his obsession with Kirk has driven him mad. We get to see how he refuses to let go of his obsession, how it drives him to make bad decisions, and how it ultimately costs him his life.

Chang (and Plummer) gets to showcase his exuberance in the climactic battle, but otherwise he’s monotonal. He’s interesting that he’s such an atypical Klingon, but we never learn why. He doesn’t want peace with the Federation – presumably, like Kirk, he can’t let go of prejudices. However, we’re left to assume that. At least with Kirk, we understand his biases.

He only shows deviation twice:

He does make a veiled threat at the beginning about how he’s always wanted to meet Kirk, but nothing’s done with it. He doesn’t exchange compelling repartee with Kirk, the way Khan does. There’s no escalation in who he is.

The focus remains on intractability, and how you can become a product of your environment – at the cost of your own future.

The issue is that sums up the Klingons in everything they do, and all their appearances (in television and film). They’re militaristic and aggressive, so that’s always their motivation: a product of their culture.

It would’ve been nice if either we got more of Chang’s backstory as a microcosm for the Klingon ideology, or if he had some scenes – like Khan – where we got to understand more of his motivation (beyond environment).

Kirk makes an early reference that the crew is due to stand down in three months, and then Bones references it again at the trial, but it has no actual bearing on the plot.

In TWOK, Kirk’s age is a factor, because he’s trying to figure how he fits in the universe, and he’s begun to think he is being left behind. In The Undiscovered Country, it’s just a thing that sits there to be mentioned at the end so they can close out this installment of the franchise.

This conceit also seems to ignore that each of the crew would be different ages, so why are they being retired at the same time – particularly when their fellow crewmate, Sulu (George Takei), now has his own starship command (although this was touted for TWOK) aboard the Excelsior?

The Wrath of Khan works so well because it’s this balance between Kirk and Khan. When Carol Marcus (Bibi Besch) and David (Butrick) are introduced independently, it’s to feed into what’s happening: Reliant coming to take Genesis, and then Kirk comes to find out what happened.

The Voyage Home is compartmentalised, but they’re all working on the same objective: finding a way to ship the whales home.

But, at times, The Undiscovered Country feels like it’s juggling a lot of disparate threads: Kirk and Bones’ trial and imprisonment; Spock and company trying to work out how to rescue them; and placement of other characters – such as the Federation President, Sulu, and Chang – so we know where they are when they’re needed come the third act.

While Star Trek has always had its lighter moments, they seem applied too often during periods that the story should be graver, e.g. when Uhura (Nichelle Nichols) is trying to bluff her way past a Klingon outpost, she speaks in halting Klingon and has to consult Klingon dictionaries. The Klingons are amused by her terrible Klingon. This feels like it should’ve been an anxious exchange but is played for laughs.

I’m not expecting the story to always be dark, but given the stakes, I think it would’ve been better to build on the tension rather than undermine it.

The same thing happens on Rura Penthe. It’s meant to be this prison that’s a death sentence, but Kirk and Bones breeze through it. Even Kirk’s one fight is relatively light-hearted.

Spock’s protégé, Valeris (Kim Cattrall) is one of the conspirators. She’s half-Vulcan/half-Romulan, which is the only reason we get for her motivation. Meyer and Nimoy wanted to use the character of Saavik, but apparently Gene Roddenberry nixed that idea because of her legacy in the franchise.

Valeris becomes reflective of how more could’ve been done with the supporting cast.

Another problem I have with Valeris is that, at times, she’s suggesting solutions to the likes of Uhura and Chekov (Walter Koenig). These are two Starfleet veterans, who should be able to confidently bluff Klingon outposts, or stonewall Starfleet, but Valeris is always there supervising and suggesting what they do.

Surely veteran officers with decades of experience who’ve served under Kirk would show this initiative themselves.

There are still a lot of awesome scenes throughout, such as:

The Undiscovery Country doesn’t reach the heights of The Wrath of Khan, which neatly fits into its 113-minutre run time.

This feels like it could’ve been 180 minutes, rather than just 110 minutes, and that extra time could’ve been dedicated to fleshing out characters such as Chang and Valeris, as well as developing the mystery around the conspiracy.

I should qualify that my complaints are largely nitpicking, though.

The Undiscovered Country is a good movie and a fitting swansong for the characters, the crew, and this Enterprise.

A Look Back: Star Trek V - The Final Frontier

A Look Back: Rocky III