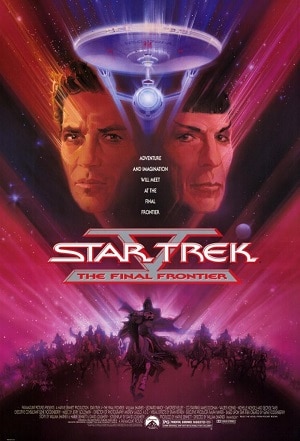 A Vulcan visionary, Sybok (Laurence Luckinbill), engineers a hostage situation on the planet of galactic peace, Nimbus III – a planet that hosts ambassadors from the Federation, the Klingon Empire, and the Romulan Empire.

The Enterprise 1701-A, under the command of James T. Kirk (William Shatner), is sent to neutralise the situation and rescue the hostages.

While Kirk’s mission initially seems successful, the hostages turn on Kirk and his crew. They have become fanatical supporters of Sybok, who has the power to explore a person’s pain, and free them of it. Consequently, they grow devoted to him.

Sybok commandeers Kirk’s ship and reveals his plan is to go beyond the Great Barrier to the centre of the galaxy, where God has summoned him. It’s also revealed Sybok is the half-brother of Spock (Leonard Nimoy).

Sybok liberates Dr. McCoy (DeForest Kelley) of his pain, and explores Spock’s. Kirk refuses, saying his pain makes him who he is.

When Sybok asks Bones and Spock to go with him, both decline (refusing to leave Kirk behind), showing the bond that the triumvirate share.

A young Klingon commander, Klaa (Todd Bryant), is eager to build his reputation as a warrior and decides killing Kirk will accomplish that. He orders that his ship pursue the Enterprise.

The Enterprise penetrates the Great Barrier – some terrible CGI cloud effects that I think were recycled (aesthetically and thematically) for Star Wars: The Rise of Skywalker – and gets to the planet.

The arrival at this destination convinces Kirk, Spock, and McCoy that something is out here. They parley with Sybok and agree to go down to the planet together. But it turns out not to be God but some evil entity.

Sybok sacrifices himself to give the others time to escape. The Enterprise can only beam up two of the three. Kirk gives the order for Spock and Bones to be beamed up. The Klingons arrive. Spock commandeers their ship through the Klingon Ambassador and saves Kirk.

In text, it doesn’t sound that bad.

So where does it fail?

Star Trek’s leap to the big screen with Star Trek: The Motion Picture (1979) was considered a dreary bore, although it’s appreciated over the years as a true Star Trek adventure that’s about exploration and discovering new life.

Cue Nicholas Meyer, who was given command of the franchise and wrote and directed Star Trek II: The Wrath of Khan (1982), which is still considered the best of all the Trek movies. It also began an unofficial trilogy surrounding Spock’s death, his resurrection in the very underrated Star Trek III: The Search for Spock (1984), and his reintegration into the crew in Star Trek IV: The Voyage Home (1986).

Through these three movies, we also meet Kirk’s son David (Merritt Butrick), witness the destruction of the Enterprise 1701, and see Kirk as an admiral, an outlaw, then demoted to captain.

They’re great arcs, and adopt the episodic nature of contemporary television. They close every plot thread in The Voyage Home.

That’s a disadvantage that they have to start over, but also exciting in that it means that they can do anything.

And Star Trek V: The Final Frontier has the right idea – it hearkens back to Star Trek’s core: exploration.

This is the heart of Star Trek. Even Star Trek: Deep Space Nine (1993 – 2000), which is station-bound, still deals with exploration.

I won’t name the other two Star Trek shows that should consider doing this (but they are Star Trek: Discovery and Star Trek: Picard).

The plot is too muddy. It has political leanings with the hostage situation, a militaristic subplot with the Klingon Commander pursuing Kirk, religious undertones in the search for God, philosophical debate about a power higher than us, and the story of exploration in going into the unknown.

It never truly settles deeply enough into one story to realise its potential.

Also, the unknown is listed as being the “center of the galaxy” beyond the Great Barrier.

In the theatrical release, the Great Barrier is just some shitty CGI clouds. Sybok portrays it as an illusion that faith can transcend. It’s a big build-up for little return. In the novelization, they have to reconfigure the Enterprise’s shields to withstand the Great Barrier, suggesting that it’s energy base (and possibly scientifically manufactured). That would’ve been worth carrying across.

The centre of the galaxy is a bigger issue.

It feels as if the story would’ve worked better had it focused purely on locating God in the unknown, discovering it was some sort of entity, and doing more to defeat and escape it.

In Star Trek canon, the Vulcans experienced such volatile emotions, they mastered control over them and installed logic as their overriding philosophy.

Sybok has reverted, which is the reason God contacted him. This is interesting to see a Vulcan at his most primal. I cannot commend Luckinbill’s performance highly enough – charismatic, compelling, and memorable.

But he’s also sold to us as Spock’s half-brother.

It’s always annoying when canon is ret-conned. Yes, Kirk gains a son in The Wrath of Khan, but Kirk’s a womanizer and the relationship presumably happened in that large chunk of time he commanded the Enterprise that The Original Series didn’t cover. We don’t learn much about his life outside of the Enterprise so there’s a lot to play with. Giving him a son doesn’t fundamentally change who he is, or how we perceive him.

That’s not the case with Spock: we see his father Sarek (Mark Lenard) in The Original Series episode ‘Journey to Babel’ (season 2, episode 10 – 1967) and in Star Trek III and IV. Their family is established.

You’d think such a prominent half-brother – or accomplished foster sister – would get a mention somewhere.

Also, their existence recontexualises so many interactions Spock has. In the case of Michael Burnham (Sonequa Martin-Green) from Star Trek: Discovery (2017 – ), wouldn’t having a human sister change Spock’s outlook on humans? Instead, he’s always bemused by human behaviour and how Kirk responds to situations. Wouldn’t having an emotional brother (in Sybok) also change Spock’s interpretation of emotions?

Another query is does Sybok have to be Spock’s brother for this story to function? The answer? Not really. It gives it a tie-in, but hardly an irreplaceable one. Sybok could’ve easily been an uncle, Sarek’s brother, a former student or teacher, a Romulan dissident exploring Vulcan theology, or simply a banished visionary (and perhaps one the Vulcans have excised from their history).

We can’t say that about David in Star Trek II. Being Kirk’s son plays an integral part in that story.

In various books, he outlines the difficulty behind production, although it’s only pertinent to the aesthetics of the movie, rather than the integrity of the story.

The previous two films have an informality about the crew’s camaraderie that works. In both The Search for Spock and The Voyage Home, they’ve gone rogue (although the ship-bound operations still retain their professionalism), so you can understand the segue into familiarity.

Here, they’re on-duty on their new ship, they’re issued an important mission, so we should see them operating in a professional capacity – as they do in Star Trek VI: The Undiscovered Country (1991) – but, for the most part, there’s an air of nonchalance.

They also don’t wear the uniforms to which we’ve grown accustomed (and which we now correlate with Starfleet), so that adds to tonal shift.

Everything also looks just a bit off – a result of a different company doing the special effects (as ILM were busy) – so it’s another reason we’re jolted from everything we know and expect.

The special effects themselves are so-so, and hurt the suspension of disbelief.

There are also lots of improbable sequences, e.g.

There are lots of moments like this which seem to have no causal basis in the narrative.

The Enterprise is called to Vulcan, where Sarek informs Kirk and Spock of Sybok’s mission to reconnect with some elemental power he believes is God, but which (Sarek believes) can only lead to self-annihilation. Sybok is a former student, and his theological leanings have been excised from Vulcan history because they’re considered dangerous. Erasing them was the logical step.

Given the Vulcans base their lives on logic, they would likely be atheists. The question then remains: what has contacted Sybok? Has embracing his emotions helped him evolve and talk to a higher power? Or is there some power trying to manipulate him for its own gain? Sarek won’t be drawn further on the subject, but demands that Sybok be stopped by whatever measures necessary.

Following a series of clues the Enterprise pursue Sybok, only for crew to experience visions of God. This then taps into the nature of faith, and could explore humanity’s treatment of the unknown. Human religion isn’t really a thing in Star Trek, so it would’ve also been interesting to see the characters question whether science has killed God, or some higher power does exist.

If an enemy was required, they could’ve employed the Romulans (for a change), who have been following Sybok’s crusade and intend to weaponise his discovery.

Kirk and company capture Sybok, who claims his vision is the First Life, a God who gave birth to life throughout the galaxy.

They are now so far into the journey that Kirk and crew decide to go the whole way.

It’s not God they find, though, but some ancient entity masquerading as a god – perhaps the Vulcan equivalent of a devil, who tempted ancestral Vulcans to engage their emotions, as it fed from them and could channel them into a destructive telekinetic power.

The Romulans try to embrace it, seeing it as powerful. As happens with Belloq (Paul Freeman ) once he opens the Ark in Raiders of the Lost Ark (1981), the power could destroy them. Sybok sacrifices himself so the others get away. The end.

This could’ve tapped into Star Trek’s mandate to explore both geographically as well as the human condition.

Decades and decades go (like three of them) I wrote fan fiction.

It may seem nerdy, but there are some great stories in fan fiction. Also, as a developing writer, fan fiction gives you a framework in which to operate that teaches you about structure, arcs, and plotting.

Anyway, in my Star Trek: The Next Generation fan fiction, Deanna Troi (Marina Sirtis) began telepathically hearing Sybok’s plea for help, which had been amplified by the entity. The entity was doing this to try and free itself.

The crew of the Enterprise 1701-D embarked on a rescue mission, found Sybok, and outsmarted the entity, which turned out to be a rogue Q.

Later, I wrote a scene for Star Trek V: The Final Frontier to sit between Kirk beaming off the planet and appearing on the Klingon vessel.

Kirk appears in a nether dimension and finds himself confronted by Q (John de Lancie), who introduces himself as one of the entity’s brethren, and elaborates they imprisoned the entity here because it’s evil and that this location is not to be disturbed again. Q also says they’re intrigued by Kirk’s efforts, and have begun to watch humanity.

I thought that would explain things, and provide a linkage between The Original Series and The Next Generation.

It also doesn’t disrupt canon, since Kirk doesn’t know who Q is, Q doesn’t identify himself, and he simply becomes an extension of the entity that Kirk already knows about.

But There is Good Stuff

For the hodgepodge it is, there’s some brilliant stuff in Star Trek V.

I haven’t seen Star Trek V for a while, although I did periodically watch it (as well as the other movies).

Despite it not being a good film, there are still things to enjoy in it.

A Look Back: Star Trek IV - The Voyage Home

A Look Back: Star Trek VI - The Undiscovered Country