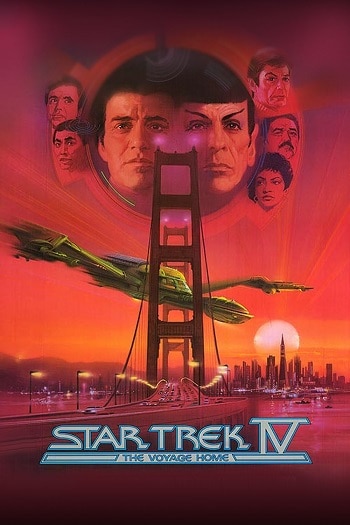 you wanted movies news in the 1980s, you had limited avenues. There was no internet. I’m sure there were magazines, but as a teenager I had no idea what they were. I – and so many others – had to rely on Entertainment Tonight (1981), a television magazine about movies and TV series.

Back then, there wasn’t simultaneous release of movies. Often, they would open in Australia months and months after they’d opened in the US.

So Entertainment Tonight was a valuable tool for a nerd such as myself looking for any advanced news on upcoming movies.

One day, I caught an interview with Nichelle Nichols who coyly said she couldn’t reveal too much about the new Star Trek movie they were working on, but that Star Trek IV: The Voyage Home would be environmentally conscious, that it would involve time travel, and that it would be about saving the whales.

(Well, this is how I remember the interview thirty-five years later.)

I thought it sounded like the stupidest thing imaginable.

Continuing directly from Star Trek III: The Search for Spock, the crew of the Enterprise are still on Vulcan while the resurrected Spock (Leonard Nimoy) is re-educated and refamiliarized with who he is. He re-joins the crew on the captured Bird of Prey with the intention of returning to Earth to offer testimony for his crewmates, who are to be held accountable for their actions in The Search for Spock (i.e. disobeying orders, sabotaging Starfleet property, and stealing the Enterprise).

Meanwhile, an alien probe is travelling to Earth, unwittingly incapacitating any ships it encounters. Once it reaches Earth, it starts transmitting a message to Earth’s oceans, although nobody can understand what it is. The probe’s presence causes cataclysmic atmospheric changes. The Federation President (Robert Ellenstein) transmits a distress signal and warns people not to come to Earth.

The Enterprise crew on the Bird of Prey receive the distress signal and reason two possible courses of action.

Admiral James Kirk (William Shatner) has the message filtered to sound as it would in the oceans. Spock works out that the message is directed at the humpback whales, which are now extinct. He extrapolates that whoever is responsible for the probe has sent it to work out why the whales have stopped communicating.

Kirk and company travel back to 1987, where they find a pair of whales at the Cetacean Institute. After a series of misadventures, our heroes take the whales back with them to their present and deposit them in the ocean. The whales answer the probe, which then leaves.

The story closes with Kirk being put on trial for his actions in The Search for Spock. Given his rescue of Earth, most of the charges are dismissed. The last – disobeying orders – sees that he’s demoted from Admiral to Captain, and given command of a new ship: the Enterprise 1701-A.

While Star Trek: The Original Series (1966 – 1969) is a science fiction series, it still has genuinely light-hearted moments. The same applies to the movies. Even Star Trek II: The Wrath of Khan (1982) – which is the darkest of the series – has light moments. But Star Trek IV: The Voyage Home is the first time the series outright delves into comedy – or what might now be more accurately described as dramedy.

The humour comes from the fish-out-of-water tropes as these characters from the 23rd century have to deal with 1987 culture. Many of these encounters are genuinely funny. Credit to the actors who so easily transition from drama to humour.

One of the nicest things about this movie is that all the cast are given something to do. Unlike most of its successors, Star Trek: The Original Series was never intended as an ensemble show. It centred around Kirk, Spock, and – to a lesser extent – Bones (DeForest Kelley).

Characters such as the engineer Montgomery Scott (James Doohan), Uhura (Nichols), Hikaru Sulu (George Takei), and Pavel Chekov (Walter Koenig) were regulars, but usually only inasmuch as they were part of the background. Every now and again, they might get a little more to do.

That doesn’t change appreciably in Star Trek: The Motion Picture (1979). Scotty, who is ranked as the next-most important character, and Chekov, have enlarged roles in Star Trek: The Wrath of Khan. Each character does something significant in Star Trek III: The Search for Spock (1984), but their parts remain minor.

It’s not until Star Trek: The Voyage Home that their roles are increased and it’s gratifying to see them given screen time after all these years.

The probe sends its messages. When the whales are brought into the present and deposited in the ocean, they answer.

We don’t actually need to know what’s said. The story sets up that whales need to be retrieved to answer the probe. Once that relationship is restored, the probe is satisfied and leaves.

It also provides a commentary (as Kirk references earlier) that by destroying our environment, we’re jeopardising our future.

I do have to say that the whales are wonderfully magnanimous. The darker side of me always ponders what might’ve happened had the retrieved whales told the probe how their species had been hunted and their numbers thinned.

It might’ve produced an interesting deviation in the outcome.

A Trek for Everybody

The Voyage Home is arguably the only movie in The Original Series franchise where you don’t need to be a fan of Star Trek to enjoy it.

At the start, Admiral Kirk narrates a Captain’s Log that recaps the previous move, so you’re given all the backstory you need to know for this movie. (Take note, Marvel.)

The scenes set in present-day Trek are brief, and not so idiosyncratic that anybody with no knowledge of Trek wouldn’t understand them.

After all, the premise is simple: a probe comes to Earth and unwittingly endangers the planet. That’s it. You don’t have to know about the Star Trek landscape, politics, aliens, or any of that. That’s as complicated as it gets.

Then the bulk of the story is set in 1987, and deals with fishes-out-of-water, which everybody can relate to.

So if you never had any interest in Star Trek and wanted a taster, or are simply looking for a good time-travel movie, this is it.

There’s not a lot to say about The Voyage Home other than it’s a genuinely fun movie. It’s clever, it’s witty, and it has a sound plot.

All the characters have lots of fun with their various circumstances, too. The repartee between Kirk and Spock – as a Vulcan still orienting himself following his resurrection while trying to cope with 1987 Earth – sparkles, particularly when Kirk (as the human on Earth) tries to ground Spock, only to be equally as clueless.

There’s also a great improvised scene where Uhura and Chekov randomly stop genuine passersby on the street to inquire about the location of nuclear vessels.

While many of the Star Trek movies would appeal predominantly to Trekkers, The Voyage Home requires very little knowledge of the universe and has a widespread appeal.

Way to Insult Your Fanbase, Discovery

A Look Back: Star Trek V - The Final Frontier