It’s little secret I’m not a fan of the new Star Trek movies, or their new series, Discovery (2017 – ) , and Picard (2019 – ).  They’re dumb bland action that mimic the Star Wars aesthetic while abandoning everything that’s made the genuine Star Trek franchise majestic. 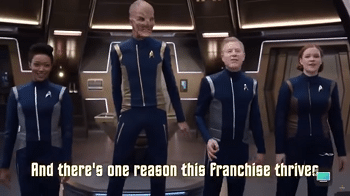 Yes. Because think about it: how many science fiction series and/or movies offer a positive interpretation of the future?

The Terminator features machines becoming sentient and trying to wipe out human life. Alien boasts a cold, corporate future, and then a bunch of xenomorphs that wipe out humans for fun. The Matrix tells us the Earth was eviscerated and we’re all enslaved in a computer program. Battlestar Galactica has cyborgs hunting humans. Star Wars (although it has no relation to Earth) is about, well, wars. Other series like Star Trek – such as Babylon 5, Andromeda, the rebooted Lost in Space, etc. – all feature a human race that is struggling to find its way.

This is the popular perception of the near future.

But here is one series that came along and said that despite how stupid and petty we can be as humans, despite whatever calamities befell us, we grew up as a species. We put an end to wars, to poverty, to suffering, to prejudices, to human pettiness, et al, and addressed the problems within our world. We gravitated to the stars and founded a benevolent galactic government that incorporated different alien species in this great democracy. Our charter became not only the exploration of strange new worlds, but the human mind in how we could evolve as a species.

That doesn’t mean that Star Trek is without conflict. The human characters stumble. They make mistakes. There are battles. People die.

But in their journey, they’re always aspiring to become better versions of themselves – to evolve intellectually and emotionally.

Now is it realistic? Will we grow that much between now and when Star Trek is set (originally in the 23rd century)?

Probably not. That’s a lot of growing up to do in a short space of time.

Will this happen at all?

Who knows? Looking at the world right now, it’s doubtful.

That’s probably why every other franchise features a dark, troubled, and often dystopian future. Writers extrapolate from what they know and project a greater mess.

But not Star Trek.

Star Trek offers us a brilliant dream – a landscape that is hopeful, positive and constructive. It shows us a different way to what we know – that even when things are going awry, we’re still seeking the most enlightened path forward. We might not always do the right thing. But we try. We learn. And we aspire to do better.

I’ve never heard of Carpool Karaoke, but the title makes it clear what you’ll be seeing.

Now I’m a little late to this party. This particular episode screened over one year ago. I’m shocked I caught no whiff of it.

Lyrics from an abbreviated version of a song in the promo immediately leaped out and slapped me in the face.

Was I overreacting? I asked one friend and he felt similarly. Another friend wasn’t offended, but just thought those particular lyrics were “dumb”.

Digging around on YouTube, I was able to find the full song.

These are the lyrics that got to me:

Throughout this last line, Rapp singles out each of the cast and espouses they’re all nerds – them, us, and everybody who has sustained Star Trek.

Fifty years, ten movies, five live-action series, one animated series (all prior to the new fodder), and apparently the only reason this franchise has thrived is because of “nerds”.

I know the counter is that this is just meant to be light-hearted fun.

Or is it an insult to the fanbase, to the franchise, and – most importantly – to creator Gene Roddenberry?

Roddenberry’s vision is the foundation of why this franchise has endured and thrived. It’s drawn in people from all different demographics. It’s inspired people in how they’ve chosen to lead their lives. It’s united so many in a common love.

And it offers an ideal not only worth preserving, but revering.

For it to be dismissed – however flippantly – is the grossest form of disrespect.

That they can condescend and insult the fanbase is irreconcilable.

Maybe the behind-the-scenes crew of Discovery had nothing to do with the lyrics, and they’re the demesne of Carpool Karaoke. However, I’m sure that somebody at Discovery would’ve had to approve of what was being put forward given it’s a representation of their intellectual property.

Somebody thought this was a good idea.

It illustrates just how little the people involved in today’s Trek have no understanding of the property, have no respect in trying to portray it genuinely, and how indifferent they are of the people they depend on for their livelihood – the fans.

Just appalling on every level.

A Look Back: Star Trek III – The Search for Spock

A Look Back: Star Trek IV - The Voyage Home