I would yay if yaying was a thing one done.

Instead, here are some short reviews. 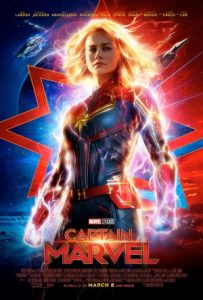 Jumping into the story when it’s already well underway doesn’t allow us to develop a bond or grow to empathise with the protagonist, Carol Danvers/Captain Marvel (Brie Larson). By the time a series of improbable flashbacks begin to catch us up, we just don’t care (well, I didn’t). There’s a twist that doesn’t work because the story is one-dimensional in framing our relationship to the goodies and the baddies.

A CGI de-aged Samuel Jackson (who still moves like a 70-year-old Samuel L Jackson) is the best thing about this movie (as Samuel L Jackson often is), although trying to align him with established canon becomes problematic. Ben Mendelsohn is wasted under a ton of latex as Talos.

The biggest issue is Carol Danvers journey. She’s super-strong to begin with. There’s no real arc for her to become strong. She already is. And when we learn about her origin, it’s just because something happens to her. Her becoming ‘Captain Marvel’ is just slapping a label on an already-formed character.

People might justify that by saying Superman’s super to begin with and does nothing to earn his powers, but in Superman he struggles to fit in as a teen, has to deal with his father’s death (and his own limitations), goes on a long journey to discover himself, and then studies for twelve years in the Fortress of Solitude. A radioactive spider gives Spiderman his powers, but he doesn’t accept what that means until Uncle Ben’s ‘With great power comes great responsibility’ speech suddenly makes sense after Peter’s inaction (in stopping a criminal) results in Uncle Ben’s death.

But Captain Marvel just is. Yay. Thanks for that trip. It’s becoming more and more prevalent in today’s storytelling that characters are handed to us ready-made. This is boring. Character development doesn’t mean you just reveal why characters are the way they are.

Captain Marvel is not a bad movie. It’s just not a particularly good movie. It’s a meh movie – forgettable even as you’re seeing it. 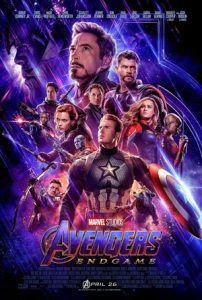 I was ambivalent about this movie going in. The problem is the set up in Avengers: Infinity War. Thanos activates his glove and eliminates half the universe’s population. Okay. So how do you fix that? Everything has to be reset. That is always going to be the only solution.

End Game tries to introduce stakes by fast-forwarding five years. Characters have tried to move on. Tony Stark now has a daughter. The story makes it impossible to do a full reset – the equivalent of, And I woke up and it was all a dream – because those stakes can’t be erased/undone. Still, however it gets there, everybody is going to be brought back. You can’t continue the universe with half its population gone, especially when a good number of them are profit-earning superheroes, like Spiderman, Black Panther, and Doctor Strange.

So a bunch of shit happens. Some of it is interesting, some of it is filler, but all of it is just a means to an end.

The final battle is, at times, awesome, producing those cool wow moments that superhero movies need. In fact, they’re wowier than any scenes Marvel has produced for the last ten years because they set aside the glibness (since the original Avengers, Marvel insist on throwing in a joke every time you wouldn’t expect a joke would be thrown in), and just build a moment for you to be in awe of the characters. Big plus. It won’t be any surprise (or a spoiler) to anybody that the Avengers succeed, which got the logical part of my brain working.

This universe has functioned for five years with its populace halved. Infrastructure would’ve adjusted. People would’ve moved on. And now everybody’s back? How does Earth’s infrastructure cope with the population going from three to six billion instantaneously? We’ve learned to produce resources to accommodate half that number over the last five years. What about partners who’ve moved on? And accommodation that has been repopulated? And jobs that have been filled? How does all that work?

I still don’t know what to make of End Game. It’s definitely not a bad or meh movie, and it does contain moments of brilliance – I just think the journey itself was always going to be somewhat underwhelming given the set-up could only ever produce one outcome, however they wanted to qualify that. 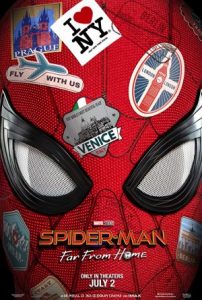 I know very little about Spider-Man outside of what I’ve seen in film and the old cartoon on TV. I have a friend who’s read the original comics and loathed this movie, but I liked it.

Tom Holland makes a cool Spider-Man, and Jake Gyllenhaal does a great job as Mysterio. Marvel ditch the interdimensional portals leading to the invasion of the latest monster and go for something much more subtle. This complements Peter’s journey in trying to accept his role as Spider-Man, and living in the superhero-vacuum caused by the events of Avengers: End Game.

The villain’s motivation could’ve been strengthened, which in turn could’ve framed Spider-Man stronger – superheroes rely on their villains. Without them, superheroes are nothing. Also, there are some action sequences that either could’ve been cut or trimmed. The CGI excess of lots of shit happening on screen remains prevalent, but it’s not that interesting when it’s overdone. The Emperor said it to Mozart in Amadeus about his opera: ‘Too many notes.’ That’s what’s happening nowadays with special effects. Too much CGI. Just cut a few and it’ll be perfect.

Spider-Man: Far From Home is entertaining bubblegum fare. It’s never going to be a superhero classic, and it’s not one I’d rewatch periodically, the way I do with Superman, Superman II: The Richard Donner Cut, and The Dark Knight, but I was entertained for the most part.

I’ll credit Marvel with never producing a truly shocking movie, like Batman vs Superman: Dawn of Justice. The bulk of their movies are enjoyable. The bad ones are bland. But I don’t think any of them (possibly Iron Man excepted) has ever reached the echelons of movies like The Dark Knight and Superman, although they way they’ve created a shared universe is brilliant.

It’ll be interesting to see if they can sustain the interest through Phase Four and build a new arc.

An Introduction to Little Diva Rising