I live with pain every day. 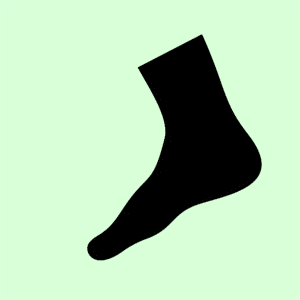 The worst of it is in my right leg and foot – a result of being struck by a car in 2011. My leg was broken, the ankle dislocated, the nerve damaged, and the injury developed Complex Regional Pain Syndrome (CRPS).

After about eighteen months of rehab, hydrotherapy, and pain seminars, the surgeon confessed he never expected me to recover as much as I did. He told me he expected the foot to be all shriveled and shiny from the nerve damage.

In my last appointment with him several months later, he laughed when I asked if it’d ever recover fully. He said the damage was too severe (a fact he constantly reminded me of throughout treatment), but cited this was a “win” – my foot might’ve been hanging uselessly off my leg, or it might be in such pain I’d beg him to take it off.

I pride myself on the work I put into it – not just the physical regimen (which I attacked tenaciously), but complementary stuff like mirror work, brain retraining (trying to teach the foot and brain to learn to communicate properly again), meditation, visualization, affirmations, taking vitamins, and everything else I could.

But, as the surgeon said, there was a lot of damage.

My right ankle always feels like it tightly wrapped. I don’t have much flexion in it. If I have to kneel, my right leg has to shoot out wide to compensate. The break went through the ankle, which is a reason now it’s so stiff.

People would ask me, “Well, did you run anyway?” It wasn’t like I was playing sport or anything.

But you run to get your phone when it’s in the other room. You run to catch a train when you’re late. You run to get out of the rain. These are all instances I’ve had to just walk and miss calls, miss trains, or get soaked.

My partner had kids. I used to kick a football around with them. That all stopped. The right leg always felt unsteady when it tried to take the brunt of my weight, and the right ankle like it might just eject the joint. Just keeping any balance was an intense study of concentration.

Because of the clawing, the right foot is permanently scrunched up. Scrunch your foot up as tight as you can. Then never, ever, ever let it go. That’s what this feels like.

Sometimes it drives me mad. It upsets my OCD and frustrates me because I can’t relax it, or can’t straighten it. It becomes that unfixable thing that gnaws at me.

It’s especially an issue with the big toe, which has a high arch in it (because of the way it’s bent). Sometimes, I fantasize about smashing it straight with a hammer. I think if it’ll just straighten, then everything will be all right.

The CRPS occasionally delivers weird messages to my brain. My foot may my feel as if it’s pointing in a direction it isn’t. Or my leg will feel as if it’s loose around the break – like it has a faulty hinge, so my leg feels like it has a wobble in the middle of the shin as I walk. There are spontaneous sensations of burning. Sometimes, it might be like somebody’s stabbed a needle into me. Other times, there’s extreme and excruciating tightness.

The pain’s always there – particularly this tenderness, the foot sensitive to contact. When it gets bad, I can hear the foot talk to me, beg me not to put it down. It’s horrible knowing the pain that’s about to come but that it’s unavoidable because I have to do whatever I’m doing.

Other times, it exaggerates contract. My partner’s foot (or her toenail) coming into contact with my foot feels like a dagger. Or I might step on something innocuous, like the vacuum cleaner cable, and it feels like I’ve stepped on a blade. One time I stepped on a hot pepper seed. I thought I’d stepped on a nail and it had driven all the way into my foot. If I take a longish walk (like over forty-five minutes), I can feel every dimple in the sole of my runner grating into me like sandpaper.

While it’s sensitive to cold (always hurts more, and is able to do less) it’s impossible to predict when or how it’ll hurt. I’ve taken hour-long walks and it hasn’t escalated beyond what I consider the base-line; then, other times it’ll hurt after a shorter walk.

When I used to run workshops, sometimes it would blow up after an hour of standing, everything becoming so tender and sensitive, the toes feeling like they were swelling the way a cartoon character’s does, with that inflating pulse.

During one of my conversations with the surgeon, he gave me textbook answers for how long he believed it would take to recover. He said after two years, whatever I was left with I was left with. Then he conceded that he’d heard of stories where a nerve injury had spontaneously healed years later.

I’m ten-and-a-half years into this injury. I was warned due to the severity of damage, that it was likely the ankle would develop arthritis and I might end up on a cane.

But you know what? I actually like to still believe that all of it will heal fully one day.

Most of the time I cope. Some days/hours/minutes/seconds/instances it’s worse, and some it’s better.

People can annoy me when they’re flippant, though. On the tenth anniversary of the injury, I posted a picture of the intersection where I was hit. Some idiot joked it must’ve been my fault and I must’ve been doing something (reckless) to get hit given the intersection was wide and open. Nope. A driver turned and ran the light while I had the right of way, hit me, ran over my leg, and tossed me ten metres.

This isn’t meant to be a pity piece. It’s just a recount of living with chronic pain everyday and the way life reshapes around it.

Lots of people have it worse.

I recall limping to the pool for my hydrotherapy early in my rehab. A quadriplegic man of about sixty was in the pool with his carers. He watched me approach – I always limp when I’m barefoot, and back then it was a heavy limp.

Once I got in the pool, he asked me what had happened. We went back and forth as I did my warm-ups (a walk around the pool). At the end of our conversation, he said to me, “I hope it comes good for you, mate.”

I was never a “could’ve-been-worse” guy, but that moment his compassion and empathy overwhelmed me given what he was going through, and it’s shifted my perspective ever since.

Everybody’s going through something.

And there is always somebody, or something, worse.

Pride: The Journey to Publication