When it was first announced that there was going to be a television series continuation of The Karate Kid saga, the cynical side of me could only marvel at the new depths Hollywood was plunging. Then it was announced that it would be called Cobra Kai, and it would feature two warring dojos, one lead by the trilogy’s protagonist, Daniel LaRusso (Ralph Macchio), and the other lead by the original movie’s antagonist, Johnny Lawrence (William Zabka). 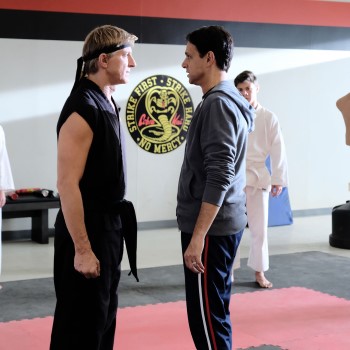 So where could you take this franchise? More importantly, was anybody interested in revisiting it?

Okay, I’m going to try stay away from spoilers as much as possible.

In the lead-up to the first season of Cobra Kai, the teasers hinted at something surprisingly good – great snippets that showcased a fully-formed world. Then the interviews emerged. Apparently, the creators of Cobra Kai decided to tell the story (of season one) through the POV of Johnny Lawrence. Now there’s a change. How would that work? The anticipation built. The scoffing surrendered to genuine curiosity. Now I was keen to see it.

The biggest danger was going to be how the writers positioned the characters. One of the difficulties in revisiting any property is how the audience accept those characters now that they’re older and their circumstances have changed. The Simpsons, South Park, etc., survive for as long as they do because those characters never age. They’re always going to be what they are, so you can always play to the same dynamics. In television and movies, cute kids grow up. Teens become adults. Adults grow old. The dynamics change. Those universes lose the chemistry that first made them appeal.

The first few episodes of Cobra Kai immediately recapture the spirit of the universe and begin building on it. If they struggle at all, it’s by asking the audience to accept that our two leads have never had any interaction – or even any awareness of one another (Daniel seems ubiquitous with his advertising) – since their encounters in the original movie. But LA is a big place, and their lives have taken different paths, so maybe it’s not that much of a stretch.

Johnny now is directionless. He drinks too much, is struggling as a handyman of sorts, is separated from his wife, Shannon Keene (Diora Baird), and estranged from his teenage son, Robby Keene (Tanner Buchanan). Daniel is doing well. He and his wife, Amanda (Courtney Henggeler), own and run a chain of car dealerships, and have a teenage daughter Samantha (Mary Mouser), and a younger son Anthony (Griffin Santopietro).

When teenager Miguel Diaz (Xolo Maridueña) is bullied, Johnny unwittingly rescues him – Johnny’s actually just protecting his car (I don’t consider this much of a spoiler, since it is heavily featured in the first season’s teasers). But that leads to Miguel imploring Johnny to teach him karate (again, heavily featured in teasers). Cue Johnny eventually deciding to reopen Cobra Kai as a means of finding self-worth, as well as simply make a bit of money. Daniel is upset that the dojo that terrorized him as a teenager is being resurrected. The dynamics are switched now. Johnny is the underdog. Danny is comfortable and influential, as well as complacent with life.

And off we go.

The premise might seem simple, but that’s where simple stops. It’s not a straightforward battle of dojo versus dojo. Cobra Kai gives every character depth, exploring their hopes and fears. Nobody is one-dimensional. Nobody’s bad just for the sake of being bad. Nobody’s good for the sake of being good. Life isn’t that simple, and those complexities are reflected in Cobra Kai. The characters’ actions are motivated. Their desires are filtered through their understanding of their world, and lead to the growth of them as people. It’s all done with such legitimacy, nuance and justification that it’s all totally believable (with one minor exception in season one). You’ll root for each character at times and dislike them at other times.

We even get the occasional flashback. Some incorporate footage from the original trilogy. Others – particularly centering around Johnny – show us his life prior to the original trilogy, building on what we know without fundamentally changing him. That’s one of the best things about Cobra Kai: the creators must love the original trilogy, because the canon is brilliantly observed and respected. Not one single bit of history that the original trilogy shows or expresses (as in through hearsay) is changed. In fact, whatever is used is intertwined subtly but reverently. This is also where Johnny Lawrence gains layers in ways that’ll contextualise his behaviour in The Karate Kid.

Now it’s not all perfect. Some of the karate students learn at an absurdly precocious rate, and the occasional coincidence is employed to drive the story (e.g. two characters randomly bumping into one another). Also, some of the humour in season two felt like it was pushing the boundary into caricature. But they’re small (and infrequent) quibbles, because overall it’s such a faithful and engaging continuation of these characters’ lives, and the storytelling otherwise is so causal and strong as it forges its own path.

Season one is fantastic – compelling and entertaining. It’s self-contained but also contributes to a greater story. Season two is equally as good for the most part. Now I’ll qualify when I write ‘for the most part’, I did feel like it was running out of puff towards the end – to the point where I wondered if they’d lost their way. Season one has a much more identifiable destination, whereas with season two you do begin to wonder where they’re taking it. The climax snaps it all shockingly back into focus.

I wanted to write this Cobra Kai review because it shows how to write sequels and honour canon, unlike Star Trek: Discovery, which decides just to abandon fifty years of history to do their own thing (which mightn’t be so bad, if they didn’t do it so badly). There are other reboots, sequels and continuations that are reinventions, rehashes, or sacrilegiously unfaithful to their core material. Cobra Kai is a template. Massive kudos to the creators and writers and everybody who makes it possible.

Discovering How to Ruin Star Trek

The Return of the Jedi vs The Rise of Skywalker