It features the typical Alex Kurtzman narrative device: mess up what we know on the grandest scale possible because of [REASONS], and deal with the repercussions.

The Romulan sun spontaneously blows up. Because suns do that, you know? They don’t take millions of years to go. It happens instantaneously.

A Romulan ship goes back in time and messes up the timeline.

Rather than try save Romulus or convince anybody that the Romulans will need help in about 25 – 30 years, the crew of the ship bum around for a while, and then later blow up Vulcan as a revenge against Spock, who they deem failed them.

It took like thirty years to find him. I wondered if they bothered trying Vulcan where he was, um, growing up.

Or did they specifically want Spock Prime? Why not got after the young one, which would then stop the future unraveling as it did?

So many questions, so few answers.

Remember Khan, the antagonist from Star Trek II: The Wrath of Khan? That movie was a sequel to an Original Series episode, Space Seed.

Well, in Star Trek into Darkness, Khan’s back … although there’s no frame of reference for his existence in this timeline, or why he should have any significance (the way he does in The Wrath of Khan), or why the audience should care.

And Starfleet has him designing weapons because a twentieth-century despot is the go-to inventor for weapons and strategies in the twenty-third century.

You know when Steve Jobs was inventing the iPhone, he didn’t talk to any contemporary techs. He went to Alexander Graham Bell.

Well, let’s jump right into the Klingon war. Okay, that’s referenced in Trek lore, and is worth exploring.

Now let’s throw in a ship that doesn’t employ the Warp drive that is the foundation of space travel in Trek and instead introduce a Spore Drive, which works on mushrooms and lizards.

And Spock has a foster sister.

And the Klingons are Orcs.

And the protagonist is a mutineer who started the war with the Klingons.

Somehow, not a single one of these facts made it into any of the other series (or movies).

I can allow some creative license, especially when the playground is loose canon.

My problem comes when they start messing with stuff that is concrete.

For example, Kurtzman doesn’t consider that if Spock grew up with an emotional human foster sister, then human behaviour would’ve hardly stumped him as it did in the series or the movies.

Also, there’s a “Red Angel” – a mysterious being in a mechanical red suit who shows up whenever Michael Burnham is in trouble.

And Section 31 (the intelligence agency in Trek) hires as two of its key employees a Klingon who’d been masquerading as a human, and a tyrant from an alternate dimension.

None of this sounds stupid, does it?

Section 31 is also working on a security program that becomes sentient and goes rogue, becoming Skynet … er, I mean Control.

The pièce de resistance in this season is that Discovery takes Control (after its been destroyed, making this route redundant) into the future as a form of exile, and the writers decide to get around all the canon incursions by making everything classified and having all the characters agree to never speak of it again – it’s like the terrible movie Sphere, where the characters decide to “forget” the key conceit.

How I envy them.

Now set 900 years in the future, the crew of the Discovery learn that all dilithium (used to power warp travel) grew unstable about one hundred years earlier, which resulted in numerous starships exploding, and signaled the end of warp travel.

In one hundred years, nobody’s come up with an alternate form of propulsion.

Now we’re not talking about some technological backwater here still trying to get their heads around steam propulsion. This is an advanced civilization constantly on the brink of scientific breakthroughs, as well as encounters with advanced alien races who might technologically signpost what they should be researching.

In Trek lore, it took them just years to create warp drive (once they’d reached a sufficient technological level). They built the Spore Drive quickly. In various TNG episodes, we saw them experiment with the Soliton Wave and wormholes. Voyager played around with subspace conduits, which the Borg used, and had one episode dedicated to Transwarp (showing it’s possible – I appreciate Transwarp still probably relies on dilithium, but cite it to show they’re constantly experimenting with technology).

But despite the need for some form of rapid travel, all technology just apparently stopped for one hundred years, and yet the Federation is still maintaining a tenuous stranglehold in the quadrant. 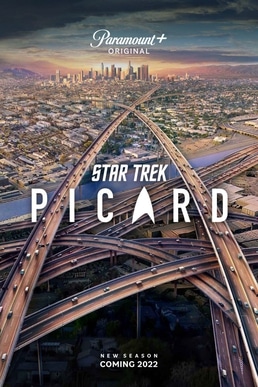 What if all the androids went mad? We see them in Picard used as menial labour, although a whole TNG episode (Measure of a Man) is dedicated to establishing their rights.

I can’t fathom how it’s more expedient and efficient building androids for menial tasks that should surely be assigned to automation, or just training people to do the damn job.

There’s also an interdimensional tentacle beast that’s so advanced it’s going to destroy all organic life, but it needs to be summoned, and once the gateway it’ll use to enter our galaxy is closed, that’s it. It doesn’t try to get back in. Despite being summoned, despite distrusting organics, despite being so advanced it’s capable of destroying everything, it just stays home.

This is Kurtzman 101: introduce some huge event – often taking a colossal dump on established canon in the process – and then spend the running time exploring it and returning things to a default value.

This is not Star Trek.

Star Trek is about moving forward, about exploring both geographically and intellectually, about looking at a future in which humans are evolved and always strive to be the best version of themselves.

And, ultimately, this conceit was just a device to put Voyager in uncharted territory so they could focus the show purely on exploration.

Star Trek: Enterprise had a cataclysmic premise – the Xindi’s attack on Earth. The difference here is it didn’t disrupt anything we knew and tried to deal with Starfleet’s formative years.

While Enterprise (like Voyager) is uneven, the writers remain beholden to Trek values – Voyager, arguably, too much so given their predicament (being alone, so far from home, where you’d think they might begin to unravel); and Enterprise just working out what Starfleet is going to be all about.

When Nicholas Meyer was hired to make Star Trek II: The Wrath of Khan, he watched the entire Original Series, and not only got Trek, but built on it in a way that his contributions became foundational for the franchise’s evolution.

You get the sense that Kurtzman might’ve flicked onto the occasional Trek episode during commercial breaks of something else he was watching, and thought it was just another version of Star Wars.

Did we expect anything different for Picard season 2?

And the central premise seems to be that he’s changed something in the past, erasing the future as we know it. Now it’s up to Picard and company to go back and fix it.

The first thing that occurs to me is that it’s not such a bad thing if we wipe out this particular future.

The second is that this plot is a hack of Star Trek: First Contact, where the Borg go back into Earth’s history and stop humans from making first contact with the Vulcans, which then stops humanity venturing into the stars so there’s no Starfleet and no Federation. Instead, the Borg assimilate Earth.

Thirdly, it looks like this season will be employing the fish out of water trope once the characters go back in time. This was done so well in Star Trek IV: The Voyage Home. In the Picard trailer, we see Raffi and Seven in a car; Raffi berates Seven, saying she can fly a starship but not drive a car. Then Seven makes a gear change and slams the accelerator. Oh, so funny. (This also ignores that Raffi was Picard’s First Officer, so her condemnation should apply equally to herself – she must know a thing or two about operating a starship.)

Fourthly, the Borg Queen is back because Borg, yay! They can provide all our plot needs.

Fifthly and finally, what happened to Picard the explorer, Picard the diplomat?

Credit to John de Lancie as Q – he appears only briefly in the trailer, but (as Jonathan Frakes did last season as William Riker) sells the hell out of it.

But the rest of it looks stupid.

Special mention also to Jeri Ryan’s Seven. In Star Trek: Voyager, she’s a human who’d been assimilated into the Borg, and had then been freed from the Collective and was now trying to rediscover her humanity.

Captain Janeway, the crew of the Voyager, and the writers behind her and Star Trek: Voyager, will be proud to see that she’s become a cynical, bitter, murderous sociopath.

You know, I could actually buy that evolution if they somehow connected it to what the Borg did to her, but nope. Seven is what she is because that’s as much thought as goes into these characters in these installments.

The only captivation behind these incarnations is seeing just how they outdo themselves for stupidity.

You can make Star Trek darker and grittier without fundamentally losing what it’s about – Star Trek: Deep Space Nine did it wonderfully. The Orville, on the other hand, proves you can still have a TNG-like show (just in case anybody tries to justify that these shows need to move on from what they were).

This now is just Trek by people who don’t get Trek.

When JJ Abrams was promoting his big screen Star Trek, he admitted he never got it:

“Star Trek always felt like a silly, campy thing. I remember appreciating it, but feeling like I didn’t get it. I felt it didn’t give me a way in. There was a captain, there was this first officer, they were talking a lot about adventures and not having them as much as I would’ve liked. Maybe I wasn’t smart enough, maybe I wasn’t old enough. But The Twilight Zone I was obsessed with. Loved it.”

Perhaps The Twilight Zone reference is telling – an episodic self-contained show where something extraordinary would happen, and then the characters would deal with it, and try to bring their lives back to a baseline.

The difference is that shows like Twilight Zone and Outer Limits were often smart science fiction with logic and motivation behind what was happening. Shit didn’t just happen for the sake of effect, which seems to be JJ Abrams’s methodology in the big franchises he’s (mis)handled.

Kurtzman, who co-wrote those first two JJ Treks, is the same.

It’s just introduce THE BIG PREMISE, have this insane wonderland where things can happen without justification or logic or motivation, and away we go.

A Look Back: The Lord of the Rings