It features an anomaly threatening the universe!

Because that’s all that happens in these stories: there are constant cataclysmic threats. We never know why. There’s no causal pathway for how these things occur. They just are, and the characters must address the situation, or face obliteration.

But what piqued my interest in the Discovery trailer is one of the visuals. 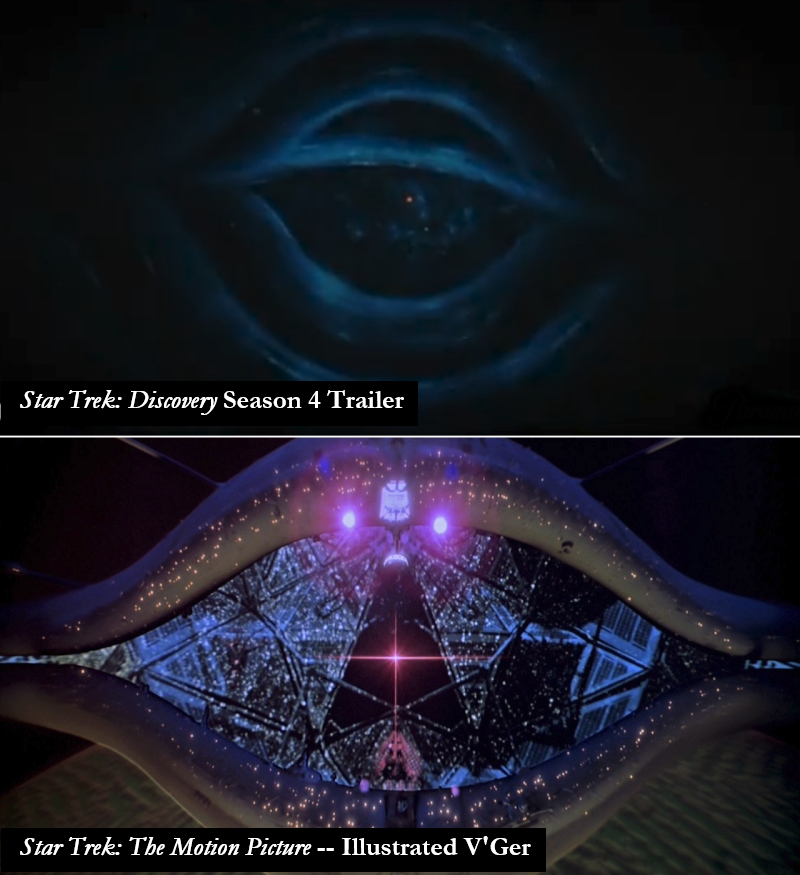 Discovery has always been visually gorgeous. Every episode is a movie aesthetically. Even this trailer will wow you with sweet, sweet visuals. So it’s interesting that they chose this design here.

Could it be the writers are resurrecting V’Ger from Star Trek: The Motion Picture?

(Beware: spoilers if you haven’t seen The Motion Picture.)

In TMP, James Kirk is now an admiral. But an anomaly appears, heading to Earth, destroying everything in its path. The refitted Enterprise, under the command of Will Decker, is about to be dispatched to investigate. But Kirk finagles command of the mission.

They intercept the anomaly, and eventually discover that it’s the home of an old NASA Voyager probe, which crash-landed on a planet, was repaired by the inhabitants, and on its way back to Earth amassed so much knowledge it achieved consciousness.

Interestingly, if you look at the ten Trek movies, existence as we know it was never threatened. Earth was. But not the universe.

Star Trek has always been about exploration – if not geographical exploration, then the exploration of human potential.

In most science fiction, the future is dystopian.

Star Trek’s creator, Gene Roddenberry, opted for a future where humanity grew up, where they explored the galaxy and tried to make peaceful contact with other species, and where humans were always trying to better themselves.

JJ Abrams’s and Alex Kurtzman’s Star Trek is about blowing shit up.

Discovery’s trailer doesn’t offer much that we haven’t already seen in the Kurtzmanverse: anomaly, universe under threat, the characters must stop it from happening.

The only curiosity would be if they’ve tapped in V’Ger, although in The Motion Picture, V’Ger merged with Decker and evolved into a new form of consciousness.

But Kurtzman doesn’t care too much about canon, outside of how a particular event can be exploited for some shoestring plot.

The other query is if they’ll somehow rope in the Borg. The Borg have marquee, and it’s much easier to use somebody else’s hard work and good writing, than build something of your own.

Now that’s not to say you can’t revisit characters, plots, and stories from other incarnations of Star Trek. In fact, Star Trek has posed numerous questions that would be worth revisiting and exploring.

Nicholas Meyer did it. His Star Trek II: The Wrath of Khan is set about fifteen years after Khan’s first appearance in the Star Trek: The Original Series episode “Space Seed”. Meyer wondered what had become of Khan and his people. We found out.

The brilliant thing about Star Trek II: The Wrath of Khan is it does so much in the confines of its revenge plot. We meet an older Kirk, questioning his role in the universe and trying to rediscover his self-worth. Kirk has a son. There’s a nifty MacGuffin in the Genesis device. Khan is a brilliant antagonist who’s vengeance is driven by loss. There’s so much happening before you get to the action sequences.

Exploring what had become of the V’ger entity has so many interesting possibilities. However, you’d think such a story would be cerebral. Given the action we see in the trailer, that’s definitely not the route we’re taking.

It opens with Tilly saying, “Life is just a blink. It is one heartbeat in the entire lifespan of the universe.”

Well, outside of mixing the metaphors, is a life one heartbeat in the entire lifespan of the universe? According to Google, the universe has been around for 13.8 billion years. Does an average life equate to a one heartbeat? I would think we’re much more insignificant than that. But it sounds poetic.

Then at 0.47 an alien with some ridges on her face tells Michael Burnham, “Leadership is about balance. Your acts of bravery are huge swings of the pendulum. And there is a very fine line between a pendulum and a wrecking ball.”

It’s typically nonsensical shit that somebody will cite as genius, but is actually gibberish.

About the only thing I can appreciate in Discovery (besides the sweet visuals) is the arc of its protagonist, Michael Burnham.

She went from a mutineer who started a war with the Klingons and got thousands killed, to a consultant, to a First Officer, to a captain.

It’s inexplicable how that could possibly happen. Most mutineers are shot. Even in Roddenberry’s universe, you’d imagine mutineers would be discharged from Starfleet. Here, apparently, it’s a viable career pathway and incurs no penalty or demotion. It’s like in Star Trek Into Darkness, James Kirk is demoted for a decision he made, then reinstated five minutes later. Things happen for effect, but have no bearing ultimately, and apply no context.

Compare that to Star Trek: The Motion Picture and Star Trek II: The Wrath of Khan where Kirk’s choice to accept promotion to admiral has ramifications on his identity and how he sees himself.

Intellectually and the emotionally, Burnham hasn’t changed at all. She hasn’t grown or matured or learned from experience. She was always doing her own thing, so making her captain doesn’t empower her. (It also looks like Tilly’s farcical promotion to First Officer remains.)

However, come the new season, I expect she’ll constantly be providing breakthrough answers to impossible situations and saving the universe, yet again, at the very last minute, just like she has every other time.