As far as the screen goes, Batman is a saturated property: we’ve had the Adam West Batman (which borders on campy genius), Tim Burton’s Batman and Batman Returns, Joel Schumacher’s Batman Forever and Batman and Robin, Christopher Nolan’s Dark Knight trilogy, Zack Snyder’s Batman vs Superman: Dawn of Justice (and Batman’s cameo in Suicide Squad), and then complementing properties, like Joker, Birds of Prey (the short-lived 2002 TV show and the more-recent movie), the television series Gotham, and several animated series.

With such a populated franchise, it forces every new installment to be different. That’s a good and a bad thing. Necessity compels originality. But, sometimes, a predecessor might’ve done something so right that it’s hard to do it differently and doing it differently just for the sake of being different only highlights it as atypical.

The Batman gives us a fledgling Batman still finding his way. 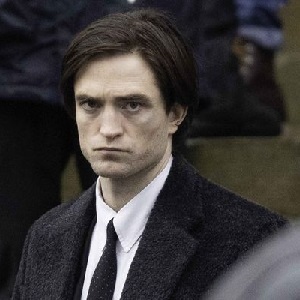 I like Robert Pattinson. From the moment I saw him in Harry Potter and the Goblet of Fire in 2005, I thought he had presence (and joked to somebody he’d be a future James Bond). While the Twilight series didn’t demand much of him, he’s pursued roles in smaller fare to develop and showcase his acting – movies such as Cosmopolis, Good Time (which I really enjoyed), and The Lighthouse.

But I’m unsure how Matt Reeves has depicted him as Bruce Wayne in The Batman. Pattinson’s Wayne looks like some Goth poet, rather than a debonair businessman. Wayne might still grow into that, but it’s hard to reconcile this Wayne could construct his alter ego (outside of it needing to happen as part of the Batmythology). I project he would’ve headed a cover band of The Cure.

Batman’s uniform looks like it’s been cobbled together, which is a nice look for a prototype Batman trying to figure out how to make this work, although I wonder why it has to look so rough. Hopefully the story will justify  it. As Christopher Nolan’s Batman Begins showed us, Wayne is rich and has access to the best materials, which is why his uniform is so polished. He has that luxury.

In several scenes, Batman is shot. I think this is important for the story: you have to show that the suit is bulletproof, which helps explain how he can function successfully in the criminal underworld, and why baddies just aren’t shooting him and killing him. 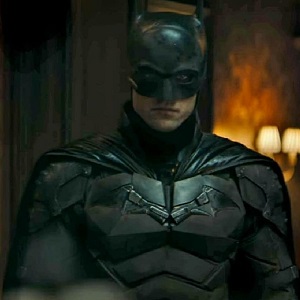 Tim Burton did this immediately in Batman. In Batman’s first appearance, he interrupts a pair of thugs counting their spoils on a building roof. One thug shoots Batman. Later, he falls from a height in an alley, and one of the Joker’s henchmen shoots him as he’s trying to get up. On this occasion, the henchmen get enough time to examine him and determine he’s wearing body armour.

Each time Batman’s shot, the bullets impact him: the first time, on the roof of the building, he’s catapulted back and falls; the second time, in the alley, he’s trying to get up from the ground when the bullets knock him back down. They also stun him – which is what you’d expect given they shoot him point blank – as he’s inactive for about the next thirty seconds.

In The Batman, Batman shrugs off gunfire (at 0.47). The second time, baddies are shooting him with machine guns (at 1.47). Batman’s not rocked. He doesn’t even blink. He walks through it the way Superman walks through gunfire. Maybe there’ll be some internal explanation for this in the whole movie (although I can’t imagine what), but scenes like this worry me.

Every story sustains the conceit that the protagonist may die. We know they won’t. Most movies, like fairy tales, will have a happy ending. That rule holds doubly true in a potential franchise that requires the hero to return in sequels. But the story’s suspension of disbelief convinces us (or has to convince us) that they’re at risk. That’s why stories grip us. If there’s no risk, who cares?

Batman should face risk like no other superhero. Unlike Superman, Thor, and the Incredible Hulk, he’s not invulnerable. Unlike, Wonder Woman, Aquaman, Spider-Man, and most superheroes, he doesn’t have superhuman abilities. He’s closer to Iron Man. However, Iron Man derives his abilities from the suit itself. It also protects him. While Batman’s suit offers a degree of protection, and his utility belt holds gadgets that can aid him, Batman’s abilities come from his training.

Bullets should knock him about. The bottom half of his face is also exposed, as are his eyes. They should be vulnerable areas. But in the trailer he comes across as oblivious. His rage powers him. That’s fine when he’s fighting hand to hand and you want to see the anger override everything else, but you’d think he’d be more cautious around guns.

The action scenes themselves are raw but feel more like they belong in The Crow than in a Batman movie. In fact, the whole trailer’s aesthetic feels remarkably similar to The Crow. That’s not to say it’s wrong, but it’ll be interesting to see how they create this interpretation of Gotham, as well as make it internally believable it would function this way in Bruce Wayne’s universe.

I do like the use of The Riddler and hope it doesn’t lead to some overblown objective. Batman has such an interesting assortment of rogues that you could write any genre story you want. So far, every movie has been about some megalomaniacal conquest. I’d love to see a Batman cat and mouse movie – something like The Silence of the Lambs or Se7en.

Batman (as a property) has this scope. That’s why he’s known as the “world’s greatest detective”. Other Batman movies only offer glimpses of this talent.

In Burton’s Batman, we see Batman determine how the Joker is poisoning the city’s residents. In The Dark Knight, Batman digitally reconstructs a bullet so he can analyse it for fingerprints. But scenes like this are outliers. It’d be nice to see a whole story dedicated to this aspect of Batman’s abilities.

I have mixed feelings about this latest installment in Batman’s cinematic universe, although this in part because (in my opinion) DC has grotesquely mishandled the intellectual properties in their franchise so far – not just the characters, but how they are placed in relation to each other, and their universe.

The trailers for the Burton Batman movies, Schumacher’s Batman Forever, and the Nolan Dark Knight movies wowed me immediately. With Joker, I was agnostic, but each trailer progressively won me over.

The Batman hasn’t done that yet, but it has enough good stuff happening that I look forward to it.